Last night’s Clash of Champions (9/25/2016) left us with more questions than answers. We’ll go through everything from last night inside! 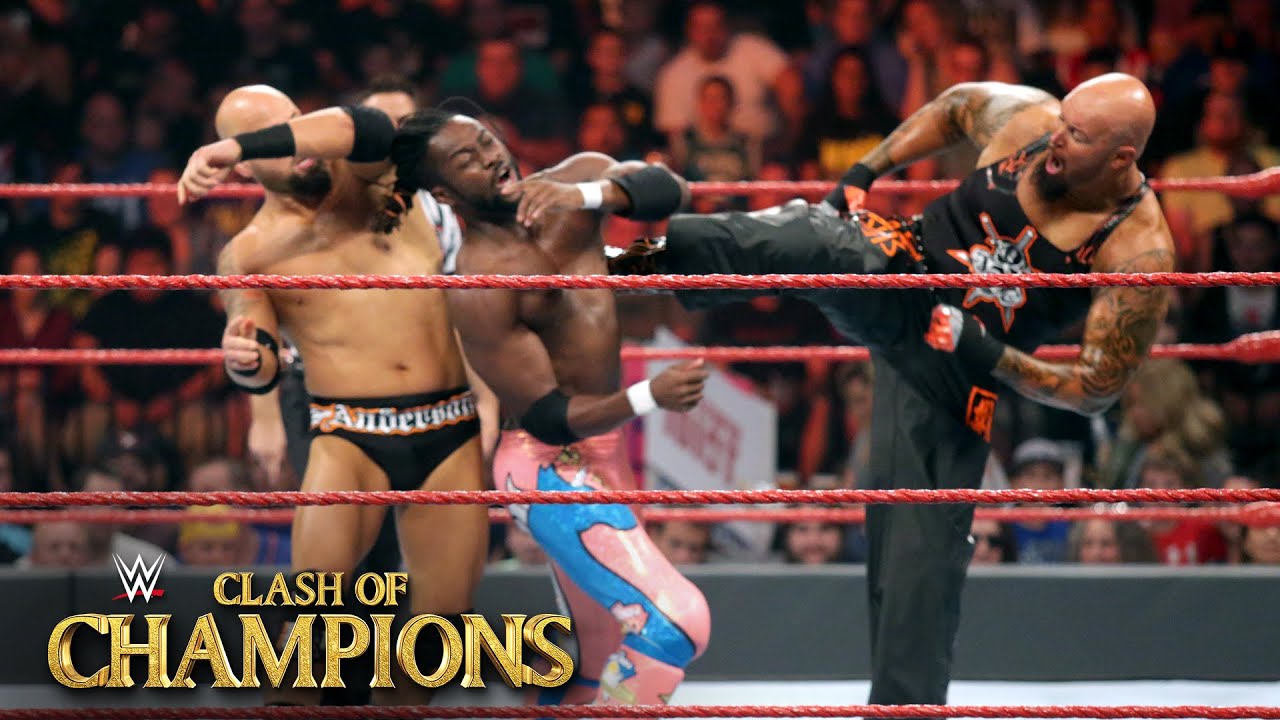 I’ll be the first to say that this feud between these two teams has not interested me very much. I’ve said before that The New Day and Gallows and Anderson just don’t mesh well enough for my liking. My opinion certainly changed last night. Gallows and Anderson brought a lot of energy to the table and looked really strong throughout the entire match. They even managed to take out Big E for the first few minutes. Things became a bit more even in the latter part of the match though. I really felt like both teams put on a good performance.

I really liked the aggression from Luke Gallows. I’ve felt like he, in particular, hasn’t been as dominant as he should be. Luke is huge and definitely shouldn’t be getting pushed around very easily. He put the boots to nearly everyone. Karl Anderson was equally as impressive. He was flying around the ring! Unfortunately, that wasn’t enough as Big E and Kofi won with the double-team.

Last night proved to me that Gallows and Anderson can turn it up for big matches in WWE. They’ve had a few gems here and there, but they’ve had a boring stigma to them for the last little while and this should erase a bit of that. I think Gallows and Anderson are a quality team and I believe they should be next to hold the Raw Tag Titles. That may not be in the cards, but it certainly should be. I don’t think any other team really makes as much sense at this point.

As for The New Day, this marks 400 days as Raw Tag Champs. That’s no easy feat and they have faced the best of the best when it comes to competition. These guys deserve everything that they’ve achieved. They took a bad gimmick and made it something that people could enjoy. They also became the most popular team the WWE currently has. There’s no doubt that this reign won’t last forever, but it will live on in the record books for the foreseeable future. 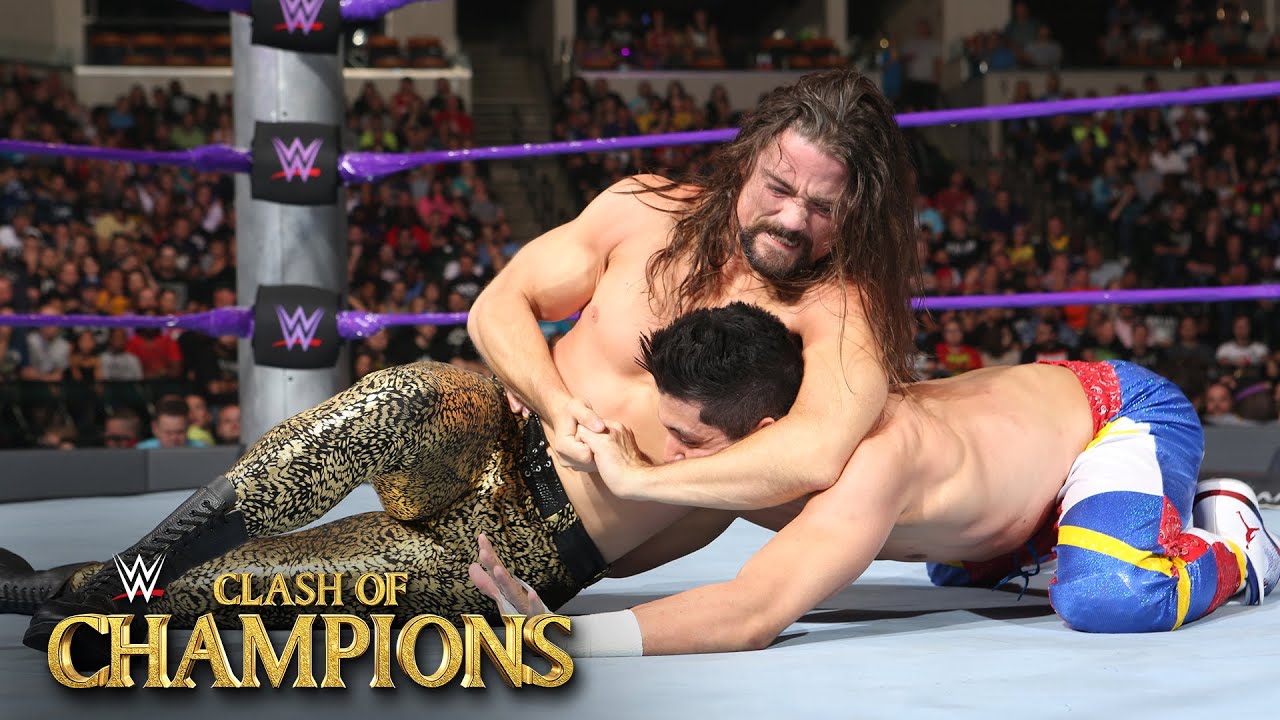 I find it very strange how the entire set changes for Cruiserweight matches. They change the ropes and the turnbuckles as well as all the graphics and lighting. It’s weird to say the least. It’s like these guys are on their own special island. I don’t really like it and don’t feel it’s necessary.

Regardless, last night marked the first title defense for TJ Perkins. Squaring off against the veteran Kendrick was a smart way to go for the first Cruiserweight PPV match. Kendrick and Perkins pulled off some nice spots including a hurricanrana over the top rope and to the outside. It wasn’t quite as flashy as the CWC matches, but I’d expect things to tone down a little bit now. These guys still had a fun match with a lot of near-falls and broken submissions. Kendrick ended up tapping to the Kneebar.

After the match, Kendrick hugged TJ before viciously head-butting him on the side of the head. It’s great to see Kendrick show this mean streak. Most of these Cruiserweights are likeable, there needs to be an enemy to battle. Kendrick fits that bill perfectly. He’s a natural heel and can really get under a crowd’s skin with a simple mannerism. There’s definitely more to come between these two.

By the way, TJ’s retro video game-style entrance was pretty unique. WWE needs to tap into personalities like that more often. 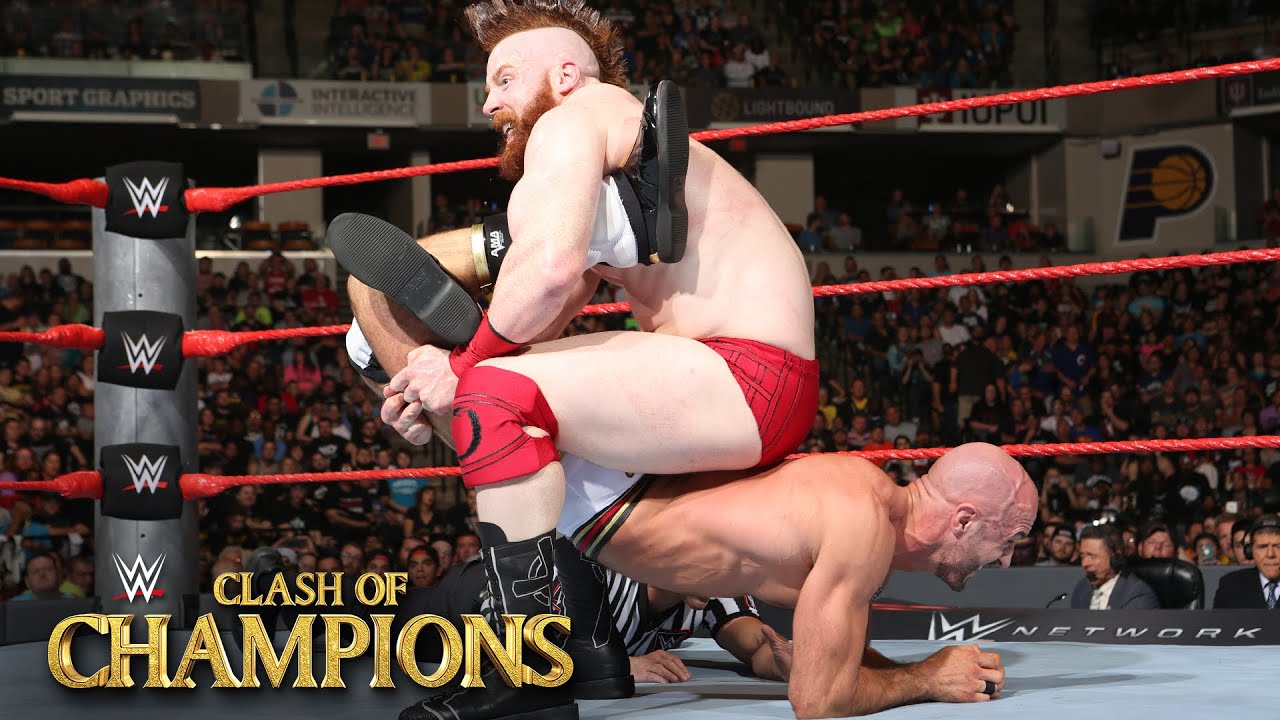 I’m not going to say a whole lot about this one. These two left it all on the line out there and gave us yet another great match. The problem is, we didn’t get a winner. Cesaro clothesline Sheamus over the barricade and suddenly the match was stopped after it was determined the men could not continue. Cesaro did go to the ring, but Sheamus was ushered to the back.

I don’t like matches being declared a no-contest. It’s a cop-out when WWE doesn’t have any ideas on how to conclude something. What purpose is there in dragging the series out longer? There really isn’t one. This was a shotty ending to an otherwise wonderful match and I know it had to leave a lot of fans feeling let-down. 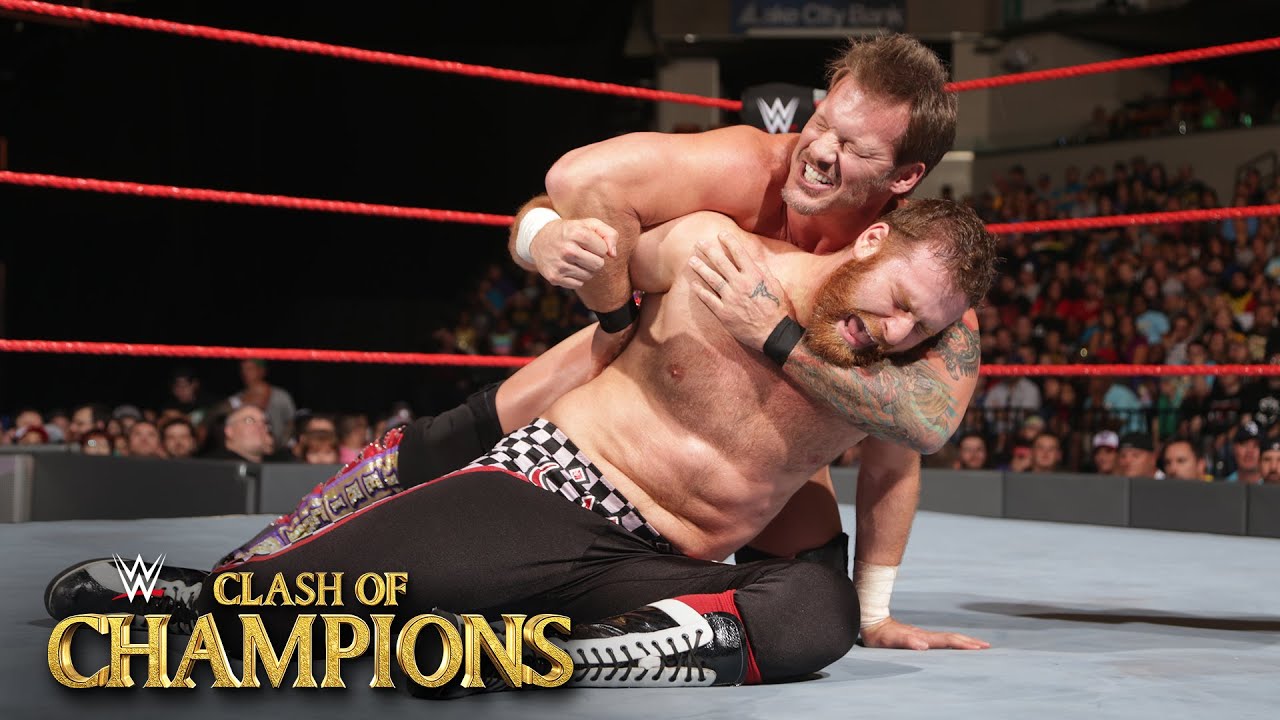 Chris Jericho is doing some of the best work of his career, that’s what was said on commentary. I wholeheartedly agree. I really think Jericho has to be in the top-5 all-time best performers list. He has been working with such a diverse set of talent and has brought out the best in all of them. The funny thing is, fans are starting to cheer Jericho. They’re appreciating what he’s doing so much, that even as a heel, he’s getting Y2J chants. It’s crazy.

Jericho did win last night with a Codebreaker out of nowhere after Sami hit a Blue Thunder Bomb. I’m glad Jericho won because I think this feud could continue and that will only benefit both men involved. Sami showed a lot of fire in the ring last night and this is bringing out other facets of his personality. I could see this leading to another feud with Kevin Owens, this time over the Universal Title. I could be way off on that and I kind of hope I am, but you never know. 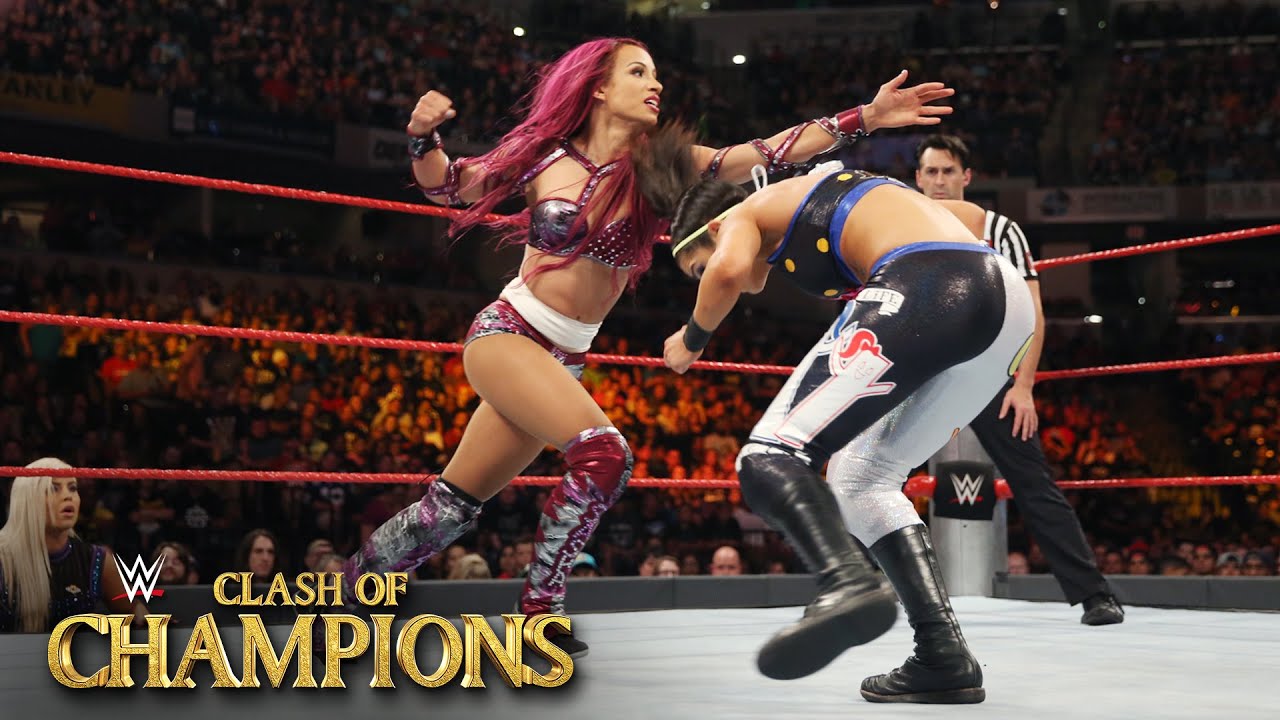 I really feel like these girls wrestle harder than the guys. There were so many moments in this match where I felt like these girls could be legitimately hurt, and yet they were all fine. All 3 of these women want to be the best and it made for a great match for the title!

Sasha and Bayley definitely didn’t seem like buddies when it came down to it. Each woman had one goal and that was the Raw Women’s Title. Charlotte pitted the two against each other over and over again and then reaped the benefits. Charlotte ended up pinning Bayley after a big boot for the victory.

Dana Brooke was the most important piece here. She was vocal the whole match, got involved since there was no DQ, and she made sure Charlotte left with the gold. I keep patiently waiting for Dana to turn and I think it may be coming. I could see Charlotte taking credit for this win and Dana getting fed up and attacking her.

No matter who came out as champion, these girls once again put on a heck of a match. They proved why they’re three of the best in WWE today. 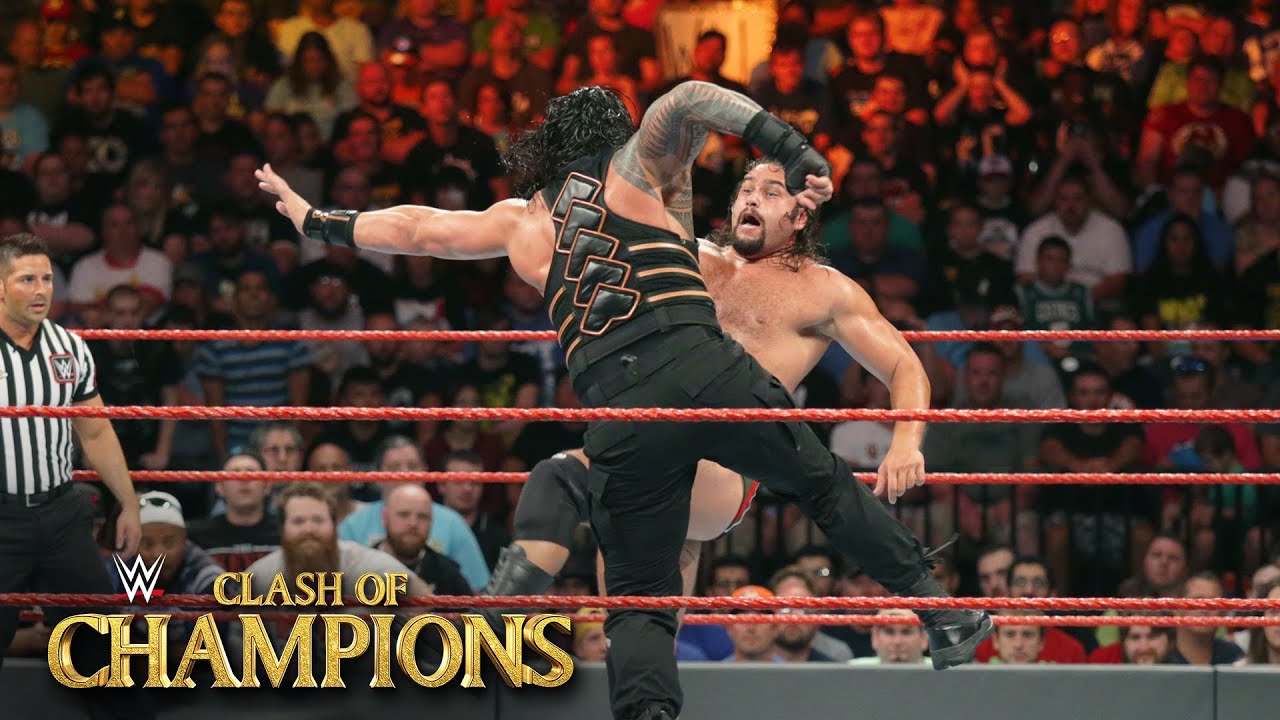 Hats off to Roman Reigns for starting his way back up the mountain by winning the US Title. The guy is too good to keep down and he’s been one of the hardest working guys WWE has this year. Reigns had to overcome Lana’s constant interference until she was sent to the back and Reigns got the pinfall. It’s really as simple as that. The only question I have is, who’s next in line for a shot at the title? 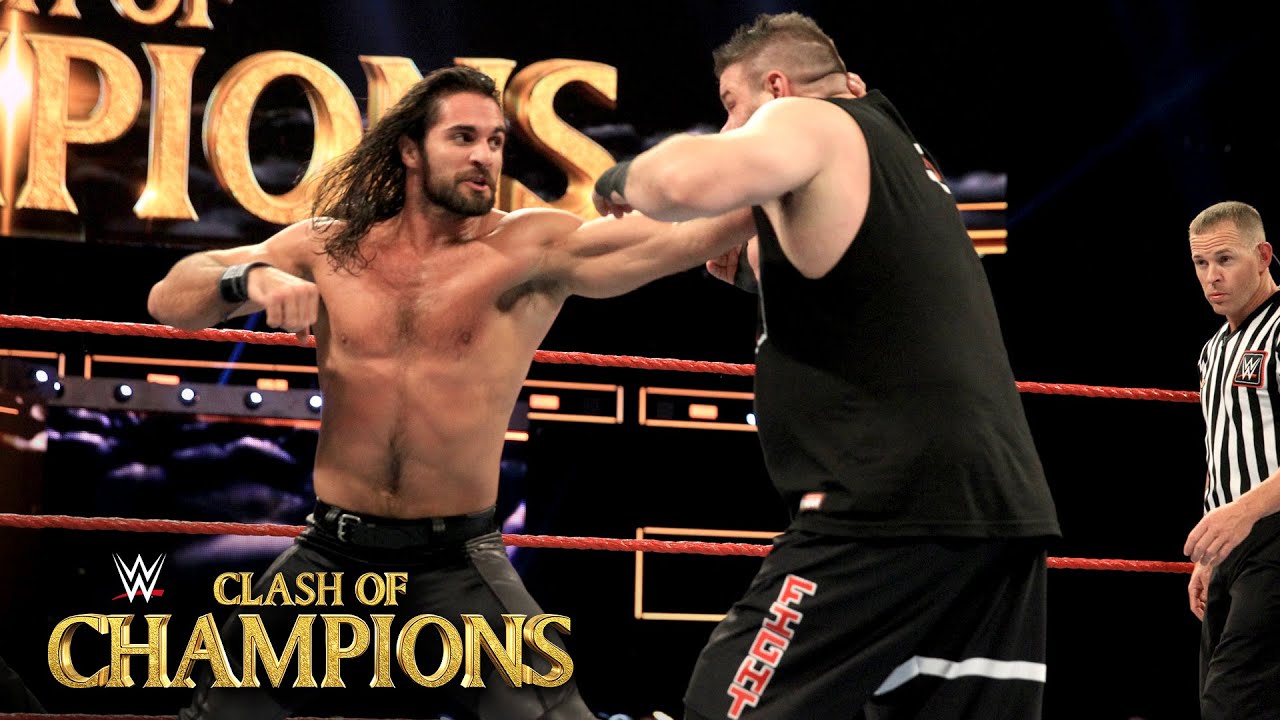 This match was the most annoying match for me last night. These two were having a good, very aggressive match against each other when a crazy chain of events started. First, Chris Jericho came down, then the referee got knocked out, then Jericho attacks Rollins, then Rollins takes out Jericho and Owens, then Stephanie sends out another referee. By the time this happens, Rollins turns into a Pop-up Powerbomb for the 3-count. Kevin Owens is still the champion. Stephanie give a glare with a subtle smile that’s barely noticeable as she walks to the back. After that, she tells Triple H everything went great as she left in a limo.

So, that’s 3 matches tonight (4 if you count New Day/Club) that ended under because of outside interference/referee stoppage. That’s way too many. This advances the story a bit, but it brings more questions than answers. After how they were hyping Triple H screwing Rollins on all the commercials, you’d expect everything to come to a head before the ed of the night, but it didn’t. I like drawn-out stories, but this once again felt like WWE wasn’t sure of what they wanted to do, so they went with something open-ended. I’m sure we’ll get more answers on Raw, but it honestly felt like a huge let-down.

Clash of Champions wasn’t the greatest. The match quality was top-notch, but the story development really hit snags on most of the big matches. I still enjoyed the event, but I felt like it could have been booked a little better.