This week on Raw (1/9/2017), Shawn Michaels and the Undertaker return while Chris Jericho and Kevin Owens challenged for the United States Championship!

Stephanie was on a tirade on Monday Night Raw last night. It’s amazing how tyrannical she can be when she turns the volume up. She spent most of the episode coming down on Mick Foley for not producing The Undertaker only to change her tune when he appeared. She laid down the law to Bayley and Sasha (which may have been planting seeds for Stephanie vs Sasha down the line), and she made a match between Braun Strowman and Seth Rollins after Seth came to the aid of Roman Reigns who was being triple-teamed.

Stephanie has always had an edge, but I think she’s gearing up to eventually be a heel character when Triple H inevitably returns. You can argue that Stephanie was never a good girl character and that would be partially true. She has been a lot better since the brand extension, though. I think Steph is much better as a heel and makes much more of an impact in that role. She adds a different dynamic for the face stars to overcome and she single-handedly made almost all of their lives difficult on Monday night. I think this is a sign of things to come. 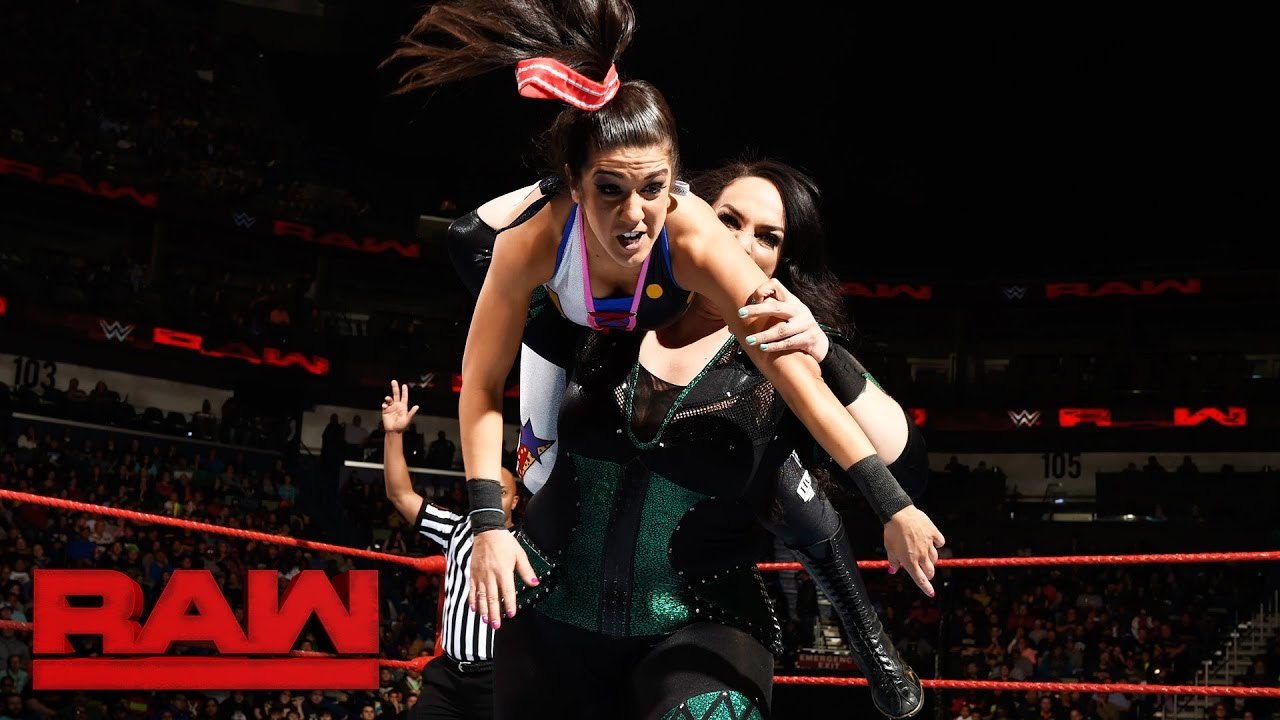 Nia is getting much more of an opportunity to show the type of performer that she is. I felt like when she was only getting squash matches, she wasn’t getting to show her cold, calculated personality. Nia and Charlotte defeated Sasha and Bayley after Nia got the Leg Drop on Bayley. Earlier in the night, Nia attacked Sasha while Charlotte attacked Bayley. Nia then pushed Charlotte against some bins. I like that Nia is still staying neutral in her quest. She just beat people up. She’s very much like

I like that Nia is still staying neutral in her quest for the Women’s Championship. She just beats people up who get in her way. She’s very much like Strowman in that way. This is how it should be with monster characters. They shouldn’t be face or heel, they should just be out to accomplish a goal. It’s no coincidence that these couple stars have been more well-received by the fans than the Kozlovs and Snitskys of the past. It’s just another way that WWE has seen an evolution and has changed with the times. 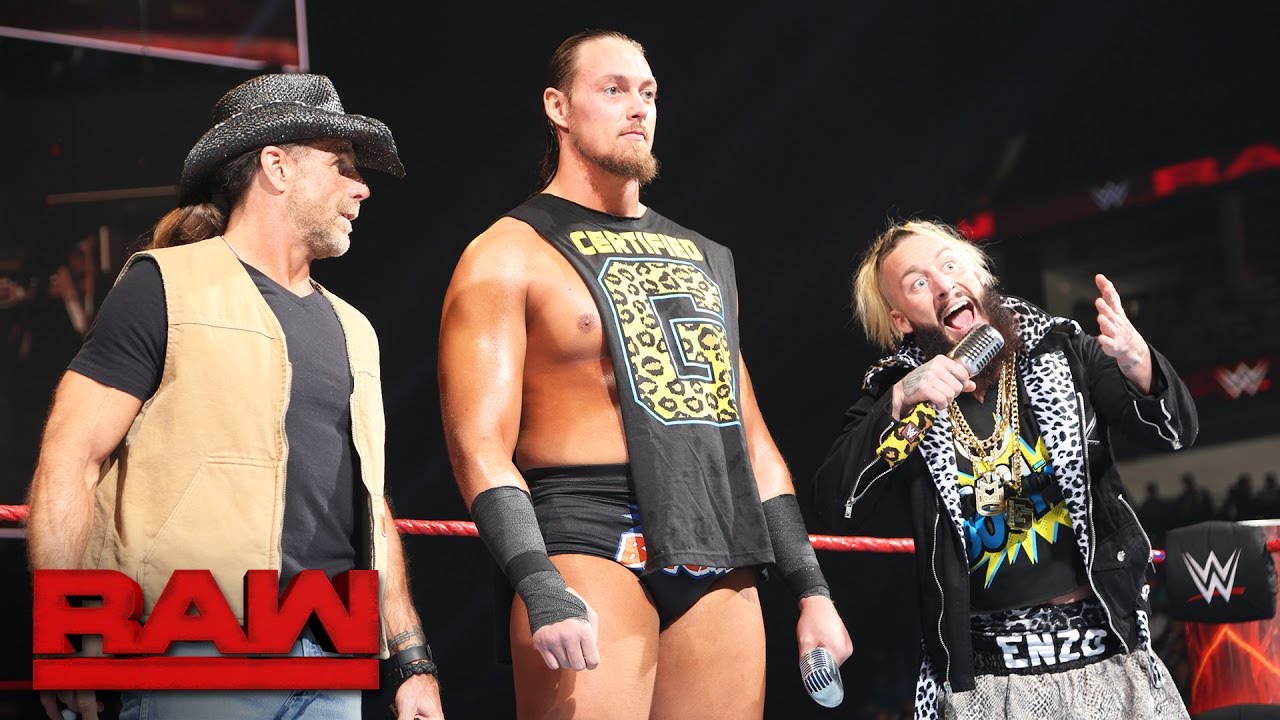 HBK returned to Monday Night Raw this week and received a great reception. I think it always annoys the fans just a little bit when he appears but never for one more match. It was almost as though we were spoiled with his last couple matches at Wrestlemania. Shawn was his usual comical self on Raw while promoting his new movie. HBK stayed out there for a match between Big Cass and Jinder Mahal and super kicked Rusev out on the floor allowing Cass to get the victory on Mahal. It was a fun segment, but kind of unnecessary in my opinion. I really dislike the promotional segments like this, a simple 30-second commercial would be a lot easier and seem less like product placement. 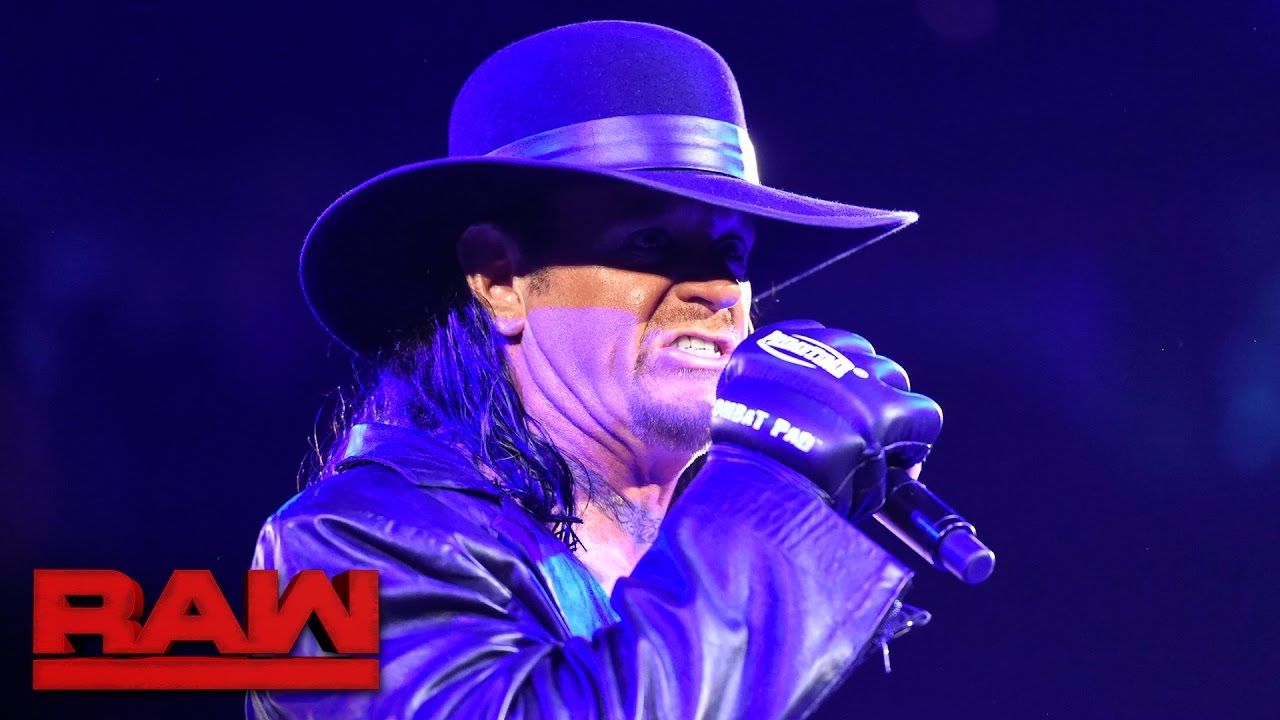 Undertaker did come out on Raw and addressed a few things for the WWE Universe. The first of which is that he will enter the Royal Rumble match for the first time in years. That’s an exciting piece of information. He also said that he goes where he wants, when he wants and doesn’t answer to anyone. I’m glad Undertaker straightened this out as he looked to be part of the SmackDown brand just weeks ago.

It’s always nice to see The Undertaker. I still can’t believe he’s been part of WWE for such a long time. There’s nothing like that entrance. I don’t think there ever will be. It should be very interesting to see if he will indeed face Cena at Wrestlemania or go in a different direction. 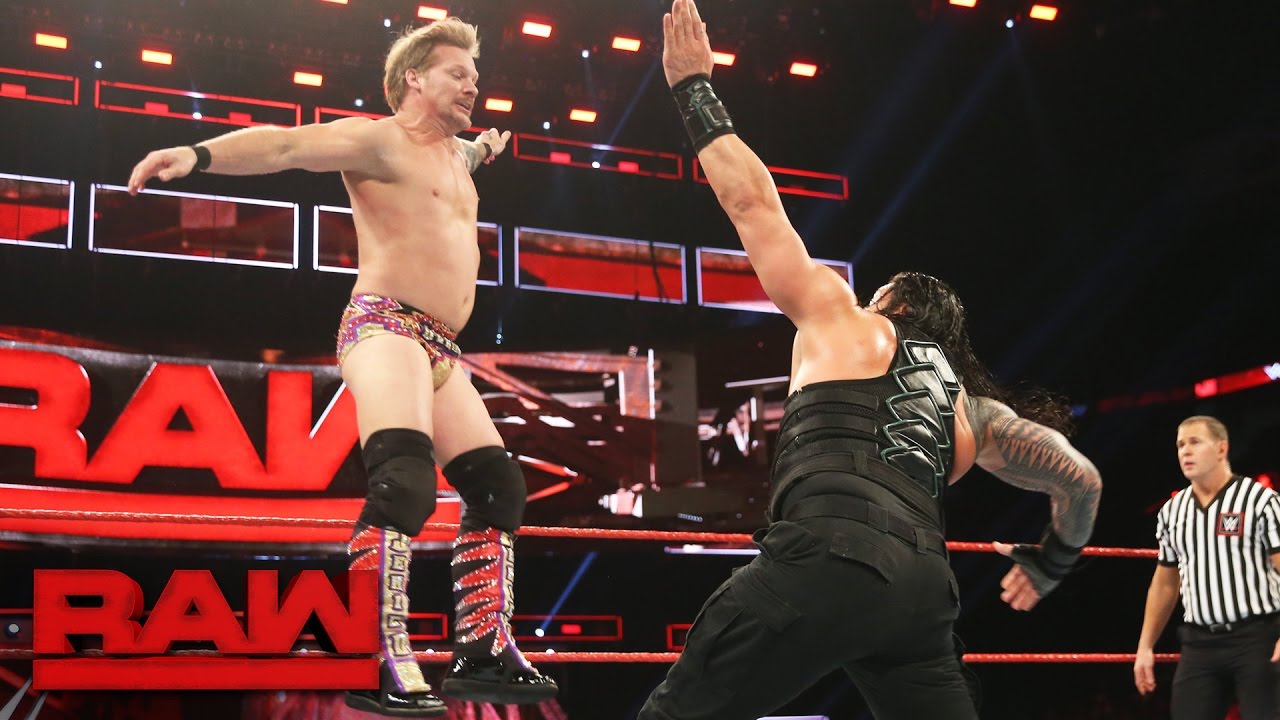 There has been a lot of word in the last few weeks about making Roman Reigns a double champion at the Royal Rumble. I was completely against that as I don’t feel that one person ever needs to hold two singles title at once. Luckily, that didn’t happen as Chris Jericho captured the United States Championship from Roman Reigns in a 2 on 1 Handicap Match with Kevin Owens. That give the best friends both of the top titles on the Raw brand.

This was a significant title win for Chris Jericho as it was the only major title that he hasn’t captured in WWE. It seems impossible for the multi-time Intercontinental Champion to have not held the other mid-card title, but this was his first reign. This frees Roman Reigns up to likely win the Universal Championship at the Royal Rumble on the Road to Wrestlemania. I’m interested in who Jericho will face now that he’s the champion. It could be Kevin Owens, but it would take a while to get to that point. I think everything will be settled by the Royal Rumble. 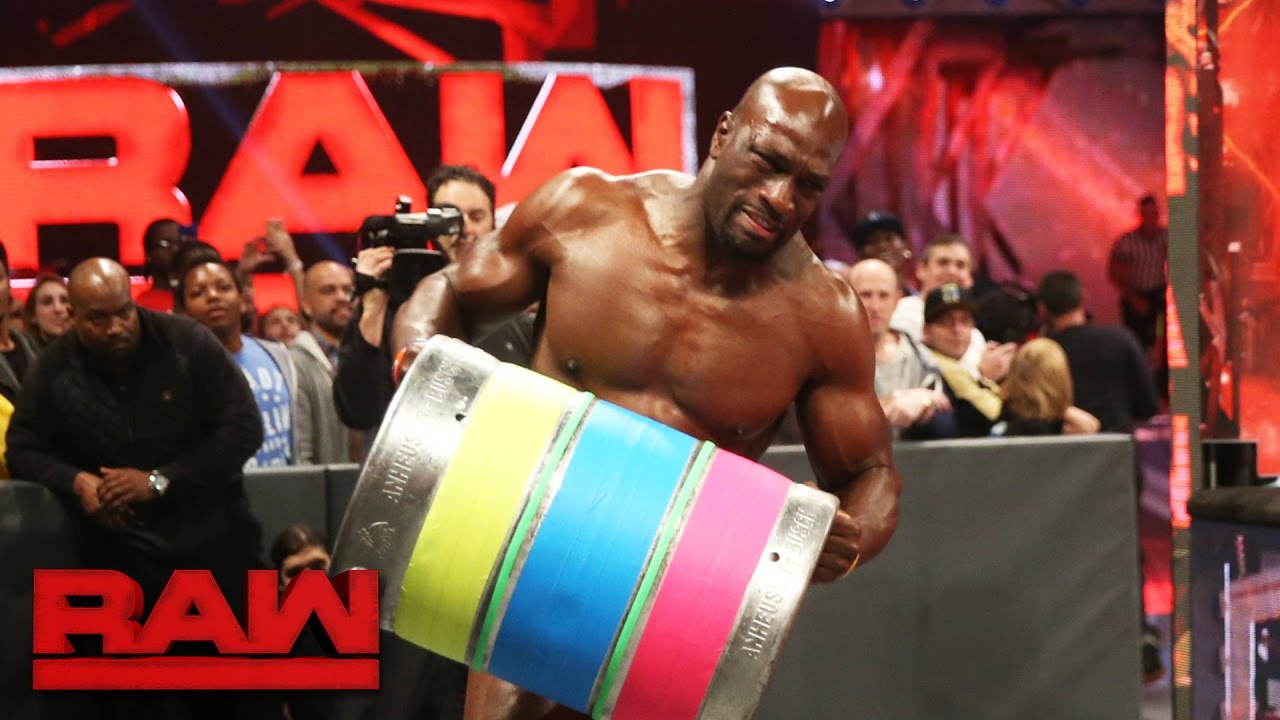 Titus O’Neil once again tried joining The New Day by completing the challenge he messed up on NXT years ago faster than he did then. Titus seemed to have done just that but dropped the keg before he crossed the line making his time invalid. This brought on a match with Kofi Kingston in which Kofi won.

Having Titus attempt to join The New Day was good filler content for a couple weeks to keep these guys fresh on TV. The New Day has been seen so much in the past year that it’s nice to see them in a lesser role so that people don’t turn on them. I think a heel turn would be a good move for this group, but they’ll likely disband before that ever happens.

Emmalina is still coming…I think? Who even knows?

Sheamus beat Luke Gallows. Someone save the Raw Tag-Team Division! I’m looking at you Dash and Dawson! 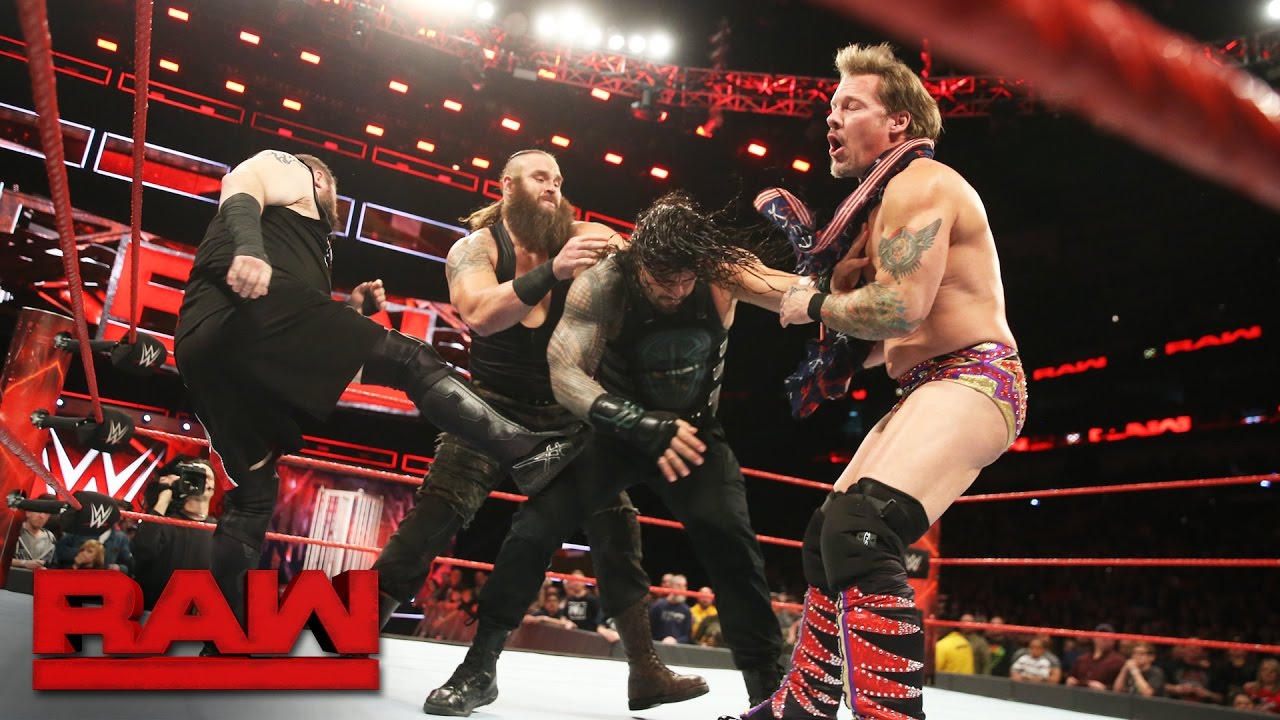 This week’s Raw wasn’t nearly as good as I expected. Seeing HBK and Undertaker was nice and Jericho winning the US Championship was a good change, but it still feels like a show in a rut. The problem is, I can’t put my finger on why that is. I just don’t feel like Raw today is much different from a Raw in November and that’s not a good sign.