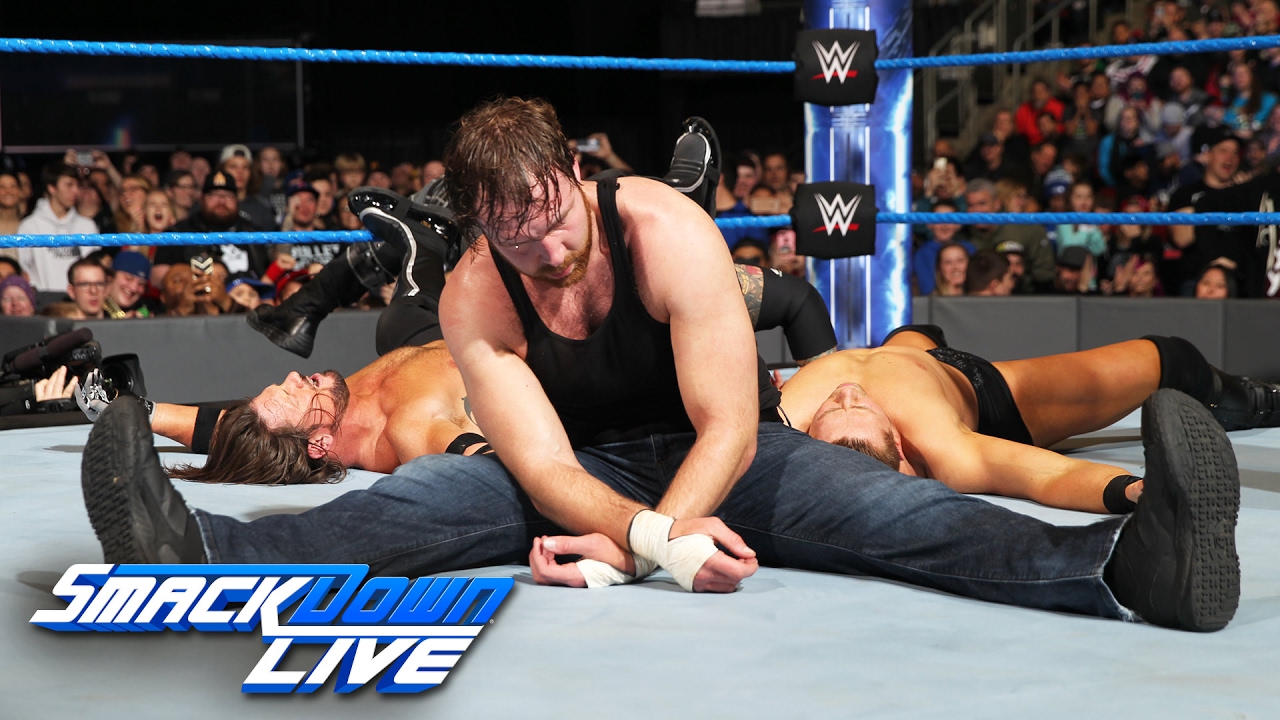 If you haven’t been convinced that Baron Corbin is going to be a big star on SmackDown, you should probably take notice. This guy has been all over the show in the last few weeks, had a great showing in the Royal Rumble, and now he’s pinned AJ Styles in a Fatal 4 Way Match. The thing I noticed about that was that Corbin beat Styles with one End of Days while it took Cena two Attitude Adjustments at the Rumble. I know that doesn’t mean much in WWE’s world and that you can’t use logic like that, but I’m sure some fans are looking at Corbin and thinking he is a legitimate threat in the Elimination Chamber. I’ve really been impressed with his evolution in the last couple months.

As improbable as it would be, Corbin winning the title on Sunday would be amazing.

Luke Harper had a minute to state his grievances with Randy Orton on SmackDown and he delivered a fantastic promo. Never underestimate the value of promo time. We haven’t heard a whole lot from Luke over the years so the fans have never really gotten behind or against him as much as they maybe should have. I definitely think he’s one of the most underrated stars on SmackDown and this feud with Orton could elevate him higher than ever before. I find myself looking forward to his segments now and that’s because he’s finally been able to show personality rather than just be Bray’s right-hand man. 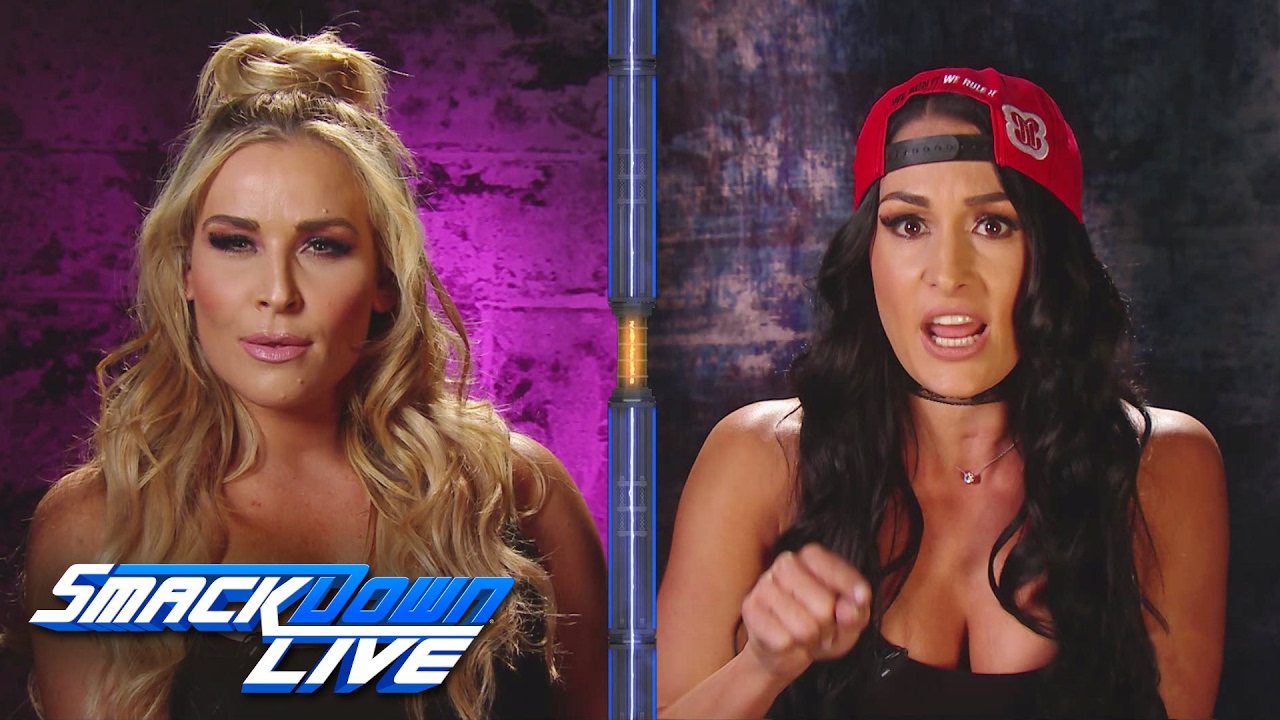 I think we have an early contender for worst feud of the year here. These two girls have absolutely nothing new to say to each other and yet they’ve been doing promos on each other for the past month. I am not interested in what’s going on here at all. There haven’t been many tag matches or anything like that, it’s just been the same things said every week. I know I’m being really harsh on this one and it may not be as bad as I’m saying it is, but I can’t get into it. I used to not understand why Natalya wasn’t champion, but her personality is so lacking. She’s great when she’s being herself on Total Divas, but it’s almost like she tries too hard in actual promos. I don’t know, I’ll just be glad when it’s over.

Nattie did attack Nikki on Talking Smack for what it’s worth, but that’s also nothing new. I just hope that Nikki comes out victorious in this feud. 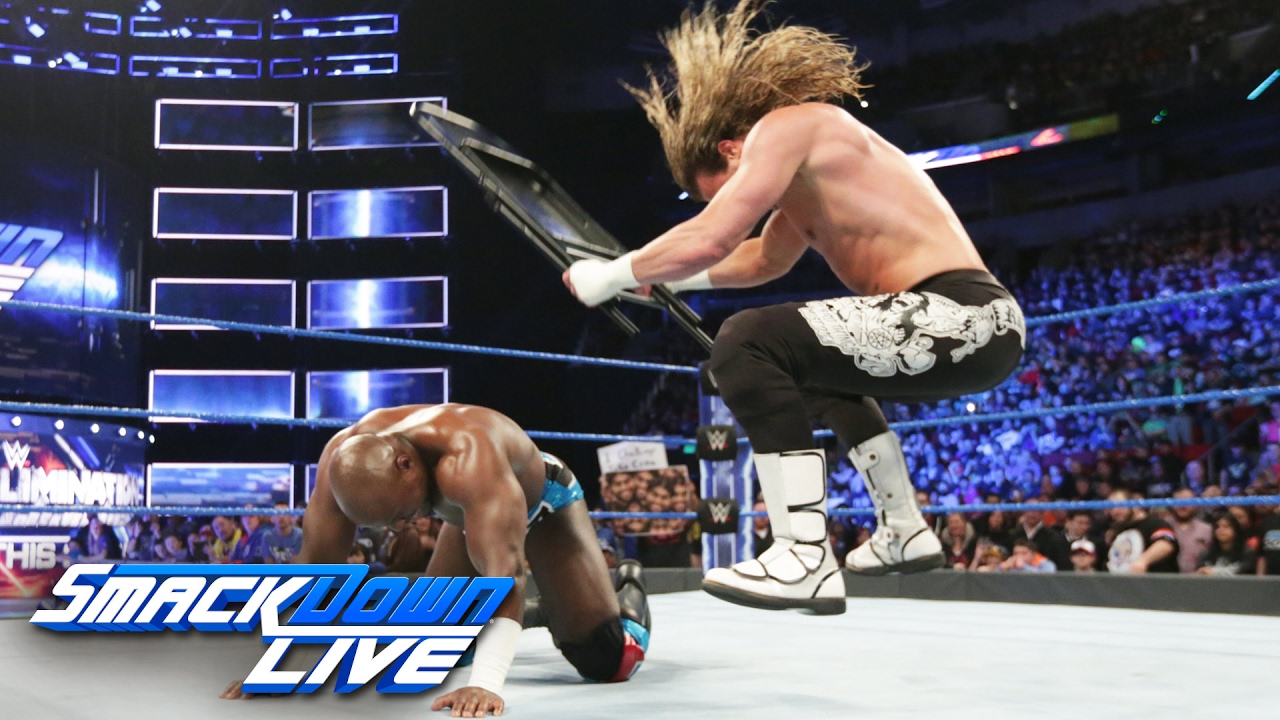 I like this new Dolph Ziggler we’re seeing. he loses and he hits people with chairs. It’s simple and it makes sense. He’s mad so he takes a chair a smashes you in the back with it. Ziggler lost to Crews after a roll-up so he beat Crews with a chair. Kalisto came out to make the save and Ziggler hit him with a chair. Therapeutic.

These 3 are on the island of misfit toys right now. They don’t have anything to do so they’re just doing a little bit of nothing until they do. It’s like Enzo and Cass with Rusev on Raw. It’s hard to care about these kinds of matches, there’s nothing on the line, it’s not really personal. I need more of a story. Ziggler will face Kalisto and Crews in a Handicap Match next week. 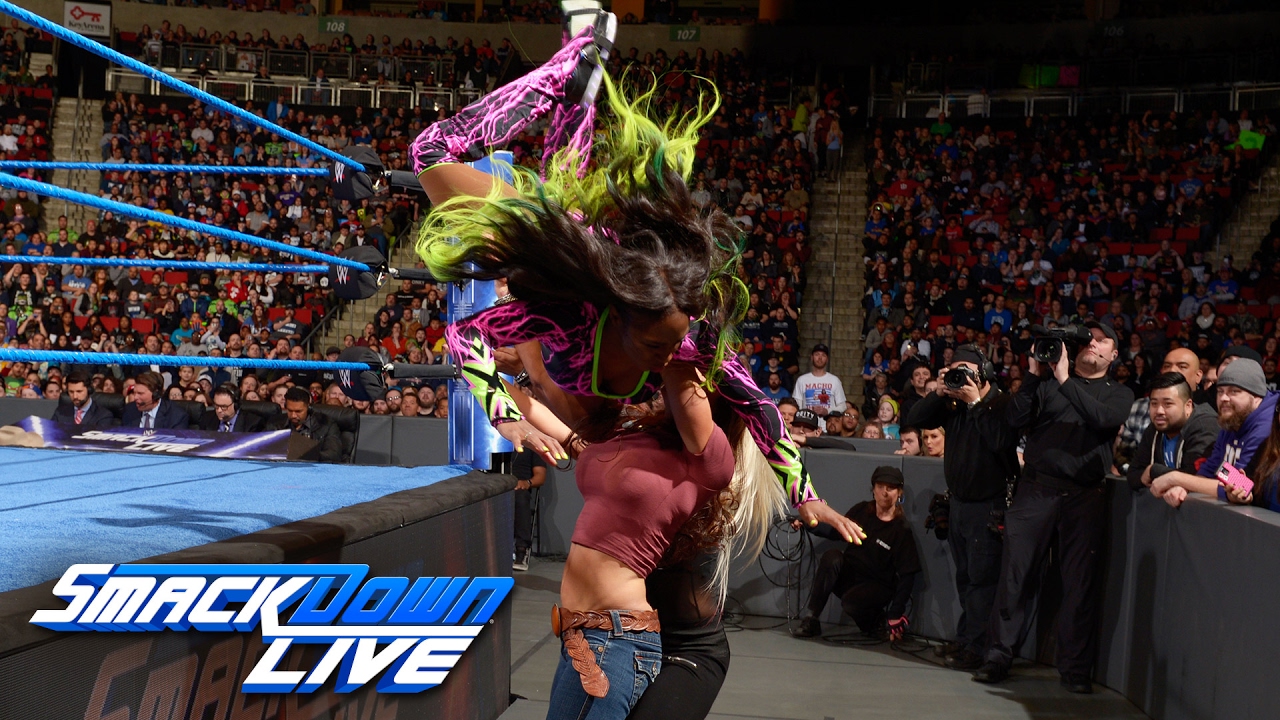 As awful as it’s been for me to watch the other women’s feud on SmackDown, Mickie, Alexa, Naomi, and Becky are the complete opposite. I’m really enjoying what’s going on here. It makes sense for Mickie to be annoyed with being replaced and I think she and Becky are going to have a really good match at Elimination Chamber. I love the mix of new stars and veterans that we’re getting to on SmackDown, I feel like it’s really helping the quality of the product.

I would also like everyone to recognize how popular Naomi has become. It’s another example of giving someone free reign to show some personality and letting them roll with it. Of course, Alexa continues to be my favourite woman on SmackDown. How can you not like that attitude? She has put everything together and is has really transitioned well from NXT. I’ve been really happy with most of the women on SmackDown. 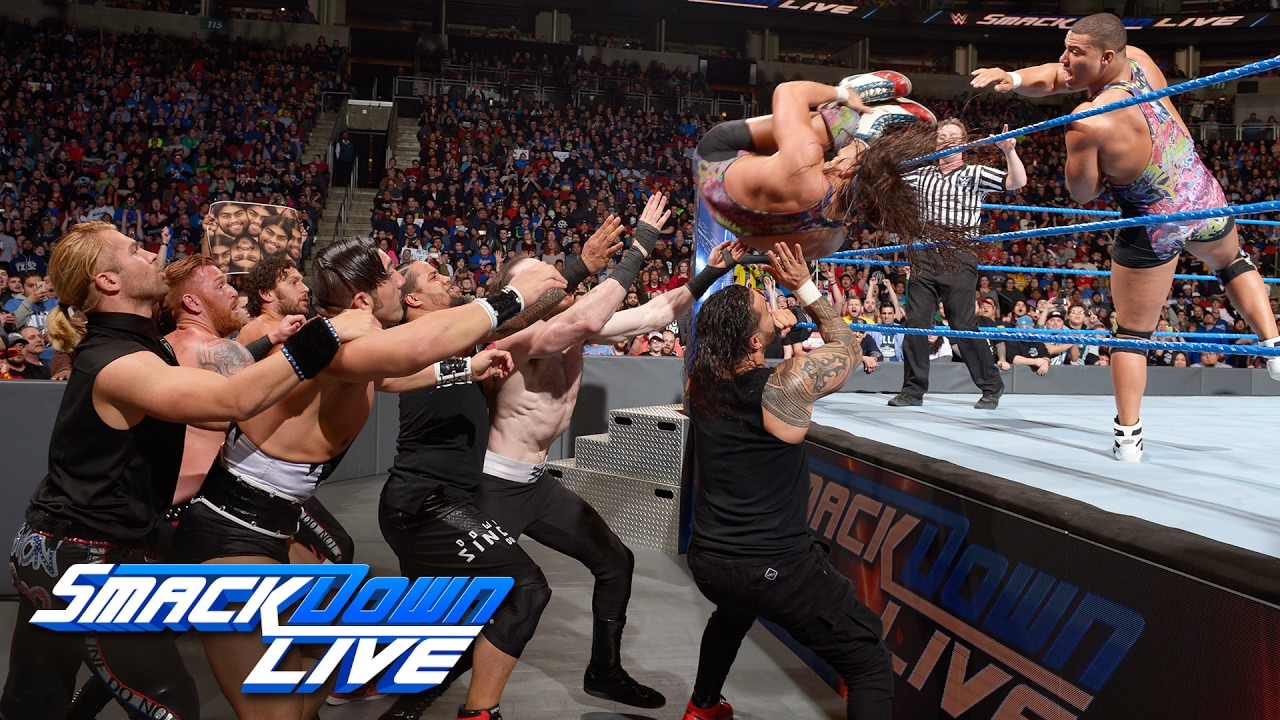 Ok, The Ascension, The Usos, and The Vaudevillains got the win in a 12-man tag match, but Viktor got the victor-y (see what I did there…I know, not funny). I can’t remember the last time either member of The Ascension got a pinfall victory so this was definitely a surprise. I desperately want these guys to return to dominance. WWE is really missing a good powerhouse team and these guys definitely fit the bill. I never did understand why they were pushed to the side besides maybe the wellness policy violation. Here’s hoping there’s some renewed faith in Konnor and Viktor. 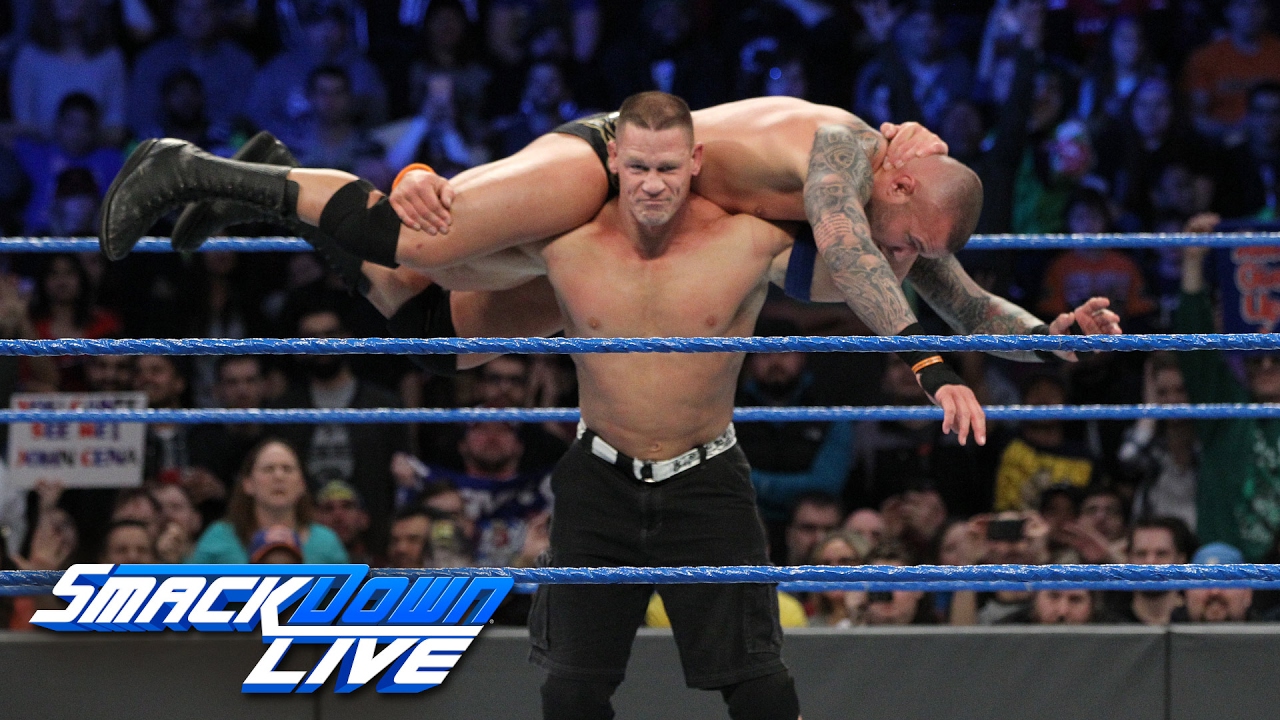 John Cena and Randy Orton renewed their rivalry on SmackDown. Of course Harper and Wyatt had a lot to do with the outcome. I really can’t stand how many main event matches have outside interference, DQ finishes, or similar things. It doesn’t seem like any match on TV actually ends as a match should. I know it’s wrestling, but I feel like too much craziness doesn’t really help matters very much. I’m hoping that we don’t see a Cena/Orton match at Wrestlemania again. I’d rather see something we haven’t seen before.