The 2/27/2017 Raw Reaction features my thoughts about Kevin Owens and Goldberg, Samoa Joe, the Women’s Division, and a whole lot more! 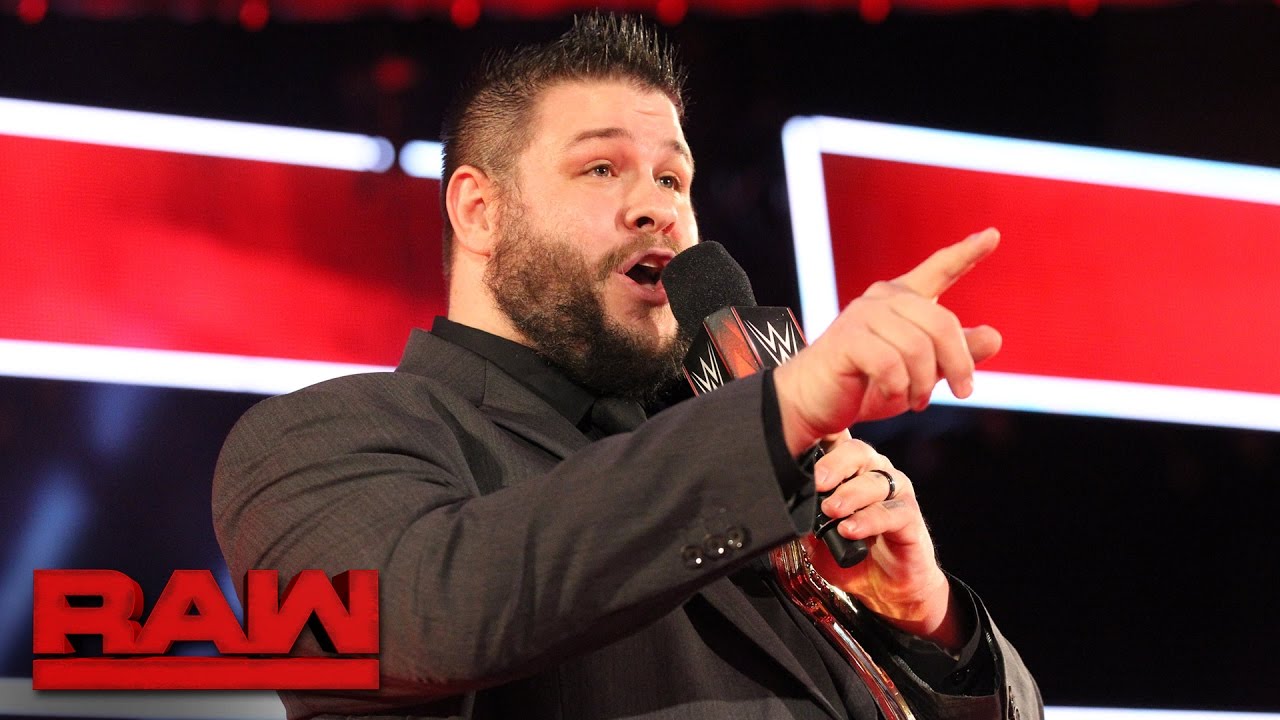 If there’s one thing I hate about WWE, it’s the way that most legends are booked when coming back for a match or a series of matches. The legend is always made to look like an insurmountable force that is leaps and bounds better than the regular WWE Superstar they’re facing. Goldberg has very much been that way to Kevin Owens since they started their feud a few weeks ago. It’s something that doesn’t sit well with me in terms of trying to make Kevin Owens soar to new heights.

Now not everything is bad. I think Goldberg has been fantastic since he has returned to WWE. He’s such a natural on the microphone and does sound like he’s legitimately fearless. WWE is righting the wrongs that soured their relationship with Goldberg in the first place by actually booking him like WCW did back in the day. That’s what made him successful and that’s what people pay to see. He’s a guy that has 3 minute matches and the place comes unglued, that’s all you need. I don’t think there will ever be another guy quite like Goldberg.

Kevin Owens has also impressed me as of late by reverting to his cold, calculated persona that made him so successful in NXT. The way Owens is talking, it really makes you believe he has a shot at keeping the WWE Universal Championship at Fastlane. The one line that stood out to me was Kevin saying, “you are next in the evolution of Kevin Owens as Universal Champion”. That one line was so perfect in that moment because I have been waiting for that next evolution for Owens as he had been somewhat stalled by being with Jericho. How amazing would it be to see Owens actually defeat Goldberg? He’d be a made man.

The New Day Mocks The Oscars 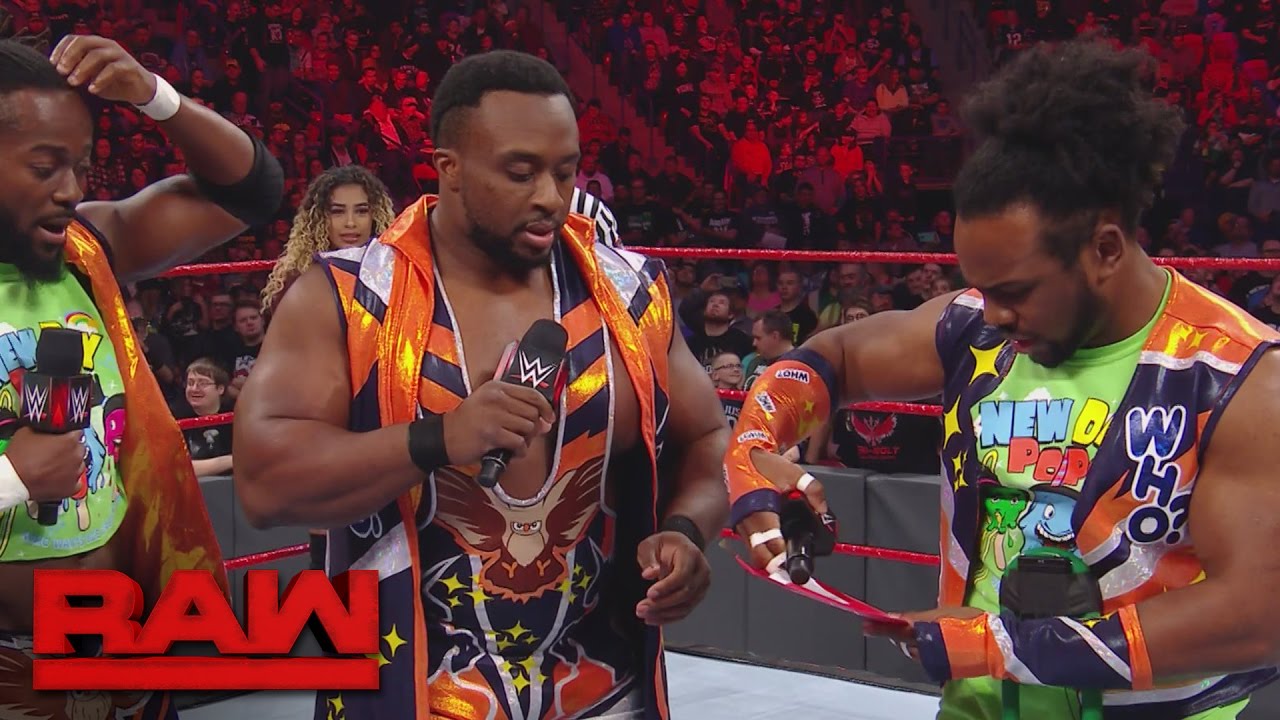 Leave it to WWE for the fantastic pop culture references. The New Day were in the ring when The Shining Stars came out. Xavier Woods then informed them that there was a mistake and they actually had a match with Big Show later on while The New Day were facing Jinder Mahal and Rusev. Woods proceeded to show off the red card that showed their names on it. These are the types of cheeky WWE segments that I love. They make the most out of any pop culture news and try and put a WWE spin on it. The New Day would go on to win the match.

Samoa Joe and Cesaro Have a Spirited Exchange 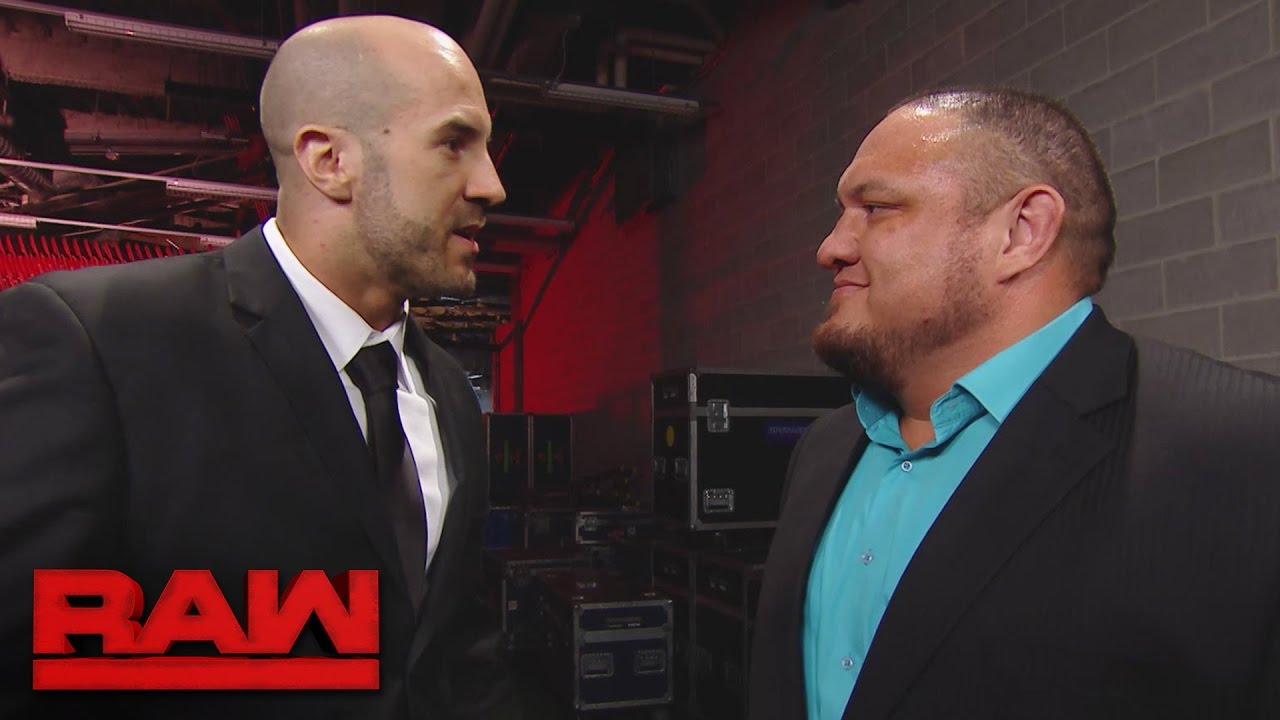 Samoa Joe and Cesaro have met at different points throughout both of their careers in Ring of Honor. That past seemed to come to the forefront on Raw as Joe said that Cesaro was the same guy he remembered from all those years ago still reaching for the brass ring. Joe ended up beating Cesaro in a fairly quick match later in the show. That gives you an idea of how highly WWE thinks of Joe and the plans they have for him. They’re booking him like an unstoppable force. I’m incredibly happy about that and I think he’s destined to do some great things on the main roster. 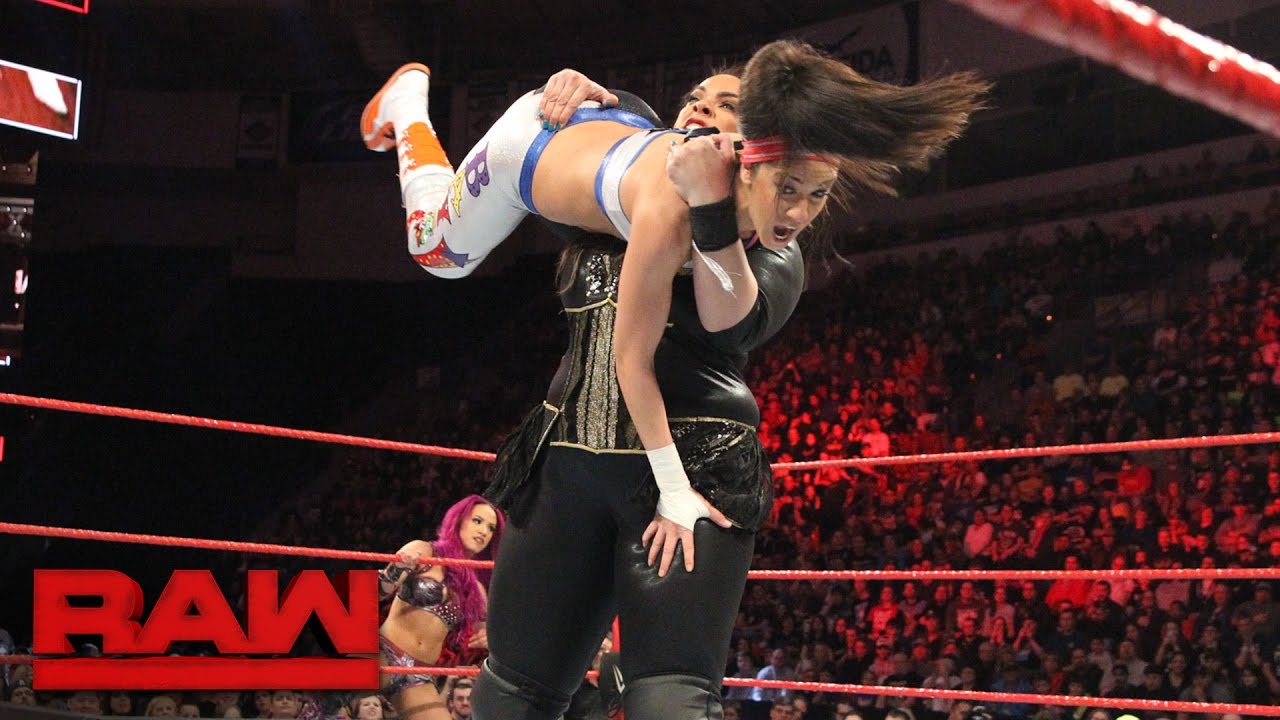 The Raw Women’s Division is really starting to heat up lately. Things are getting pretty interesting with Bayley, Sasha, Charlotte, and Nia all fighting over the championship. The one thing I haven’t understood is the relationship between Nia and Charlotte. There’s really no reason for those two to have any sort of alliance, yet they tagged together like they were allies. It makes sense for Sasha and Bayley, but Charlotte and Nia have never had any real affiliation together other than being heels. Nia almost single-handedly won them the match by taking both Sasha and Bayley out and getting the 3-count.

I do think that Sasha is going to turn on Bayley and cost her the championship at Fastlane. It would be a good time for her to turn heel. There isn’t much left for Sasha to accomplish as a face. All the stuff about Sasha stealing Bayley’s spotlight seems to be a way to get there. Sasha has been there every moment of Bayley’s title reign thus far and it would only make sense for WWE to swerve everyone and have her cost her the title on Sunday.

If you hadn’t noticed, Dana Brooke has finally been showing up on Raw and was the manager for the tag match. I read a lot on Twitter about how she was horrible because she botched a leg grab and I just had to address that here. Why does it matter if someone misses a leg grab? Why does anyone feel the need to call her out on Twitter for that? As fans, we think we know more than we do. I do this articles 3 times a week and sometimes, I make criticisms that are unwarranted as well. I just try and make sure that I respect the performer when I do it. These men and women work incredibly hard and none of them deserve to be treated the way that Dana does on a consistent basis.

Seth Vows to be at WrestleMania

Triple H had a great promo on Raw talking about Seth coming to the realization that he deserved what happened to him. He told Seth that he bit the hand that fed him and that he used Seth up and spit him out. He told him to man up about it because he was profiting along the way. It was a pretty spot on promo and so very true to the situation. When Triple H delivers a promo, he says it as if it’s a real thing that happened outside of storylines. That’s why his delivery is so good. He makes it personal and he brings that emotion into it that some guys just lack.

Triple H went on to warn Seth that if he shows up at WrestleMania that it will be the last thing that Seth does in a WWE ring. Seth responded by saying if that’s true, it will be the last thing Triple H does as well. This match, just from that one promo segment, sounds like it’s going to be an incredible war at WrestleMania. I really think that they should add a stipulation to this one, though. I can see it being a No Holds Barred Match or something similar to that. 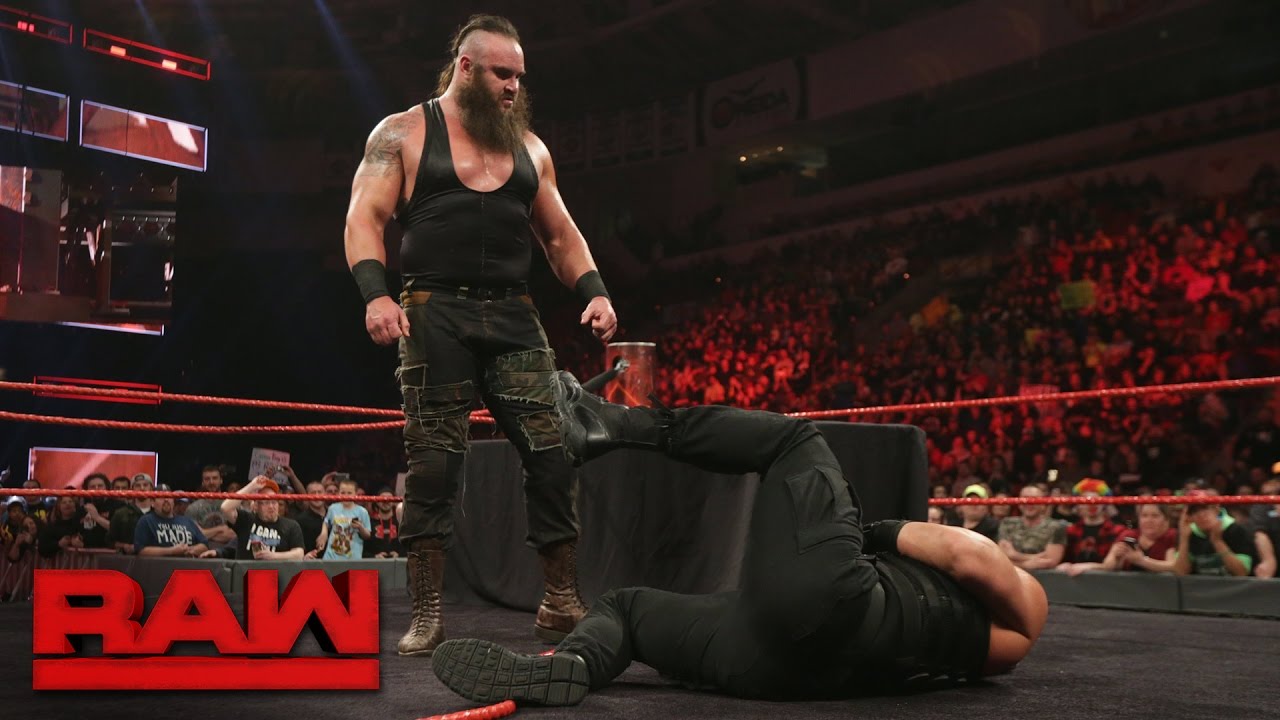 I’ve been waiting for Mick Foley to stand up for himself for weeks. It’s been really weird to watch Mick be constantly talked down to by Stephanie McMahon among others. He chose to stand up to Braun Strowman of all people which was perhaps the best-case scenario for effect. Roman Reigns would come out and fight Braun Strowman all over the arena before getting sent into the top turnbuckle by Braun.

I’m really hoping that they use this moment to have Strowman defeat Reigns at Fastlane. If Reigns defeats him then I really think that Braun’s aura will be lost and he’ll be just another big man. This guy needs to keep that momentum going as much as possible and Reigns definitely doesn’t need any more high-profile victories under his belt at this time. 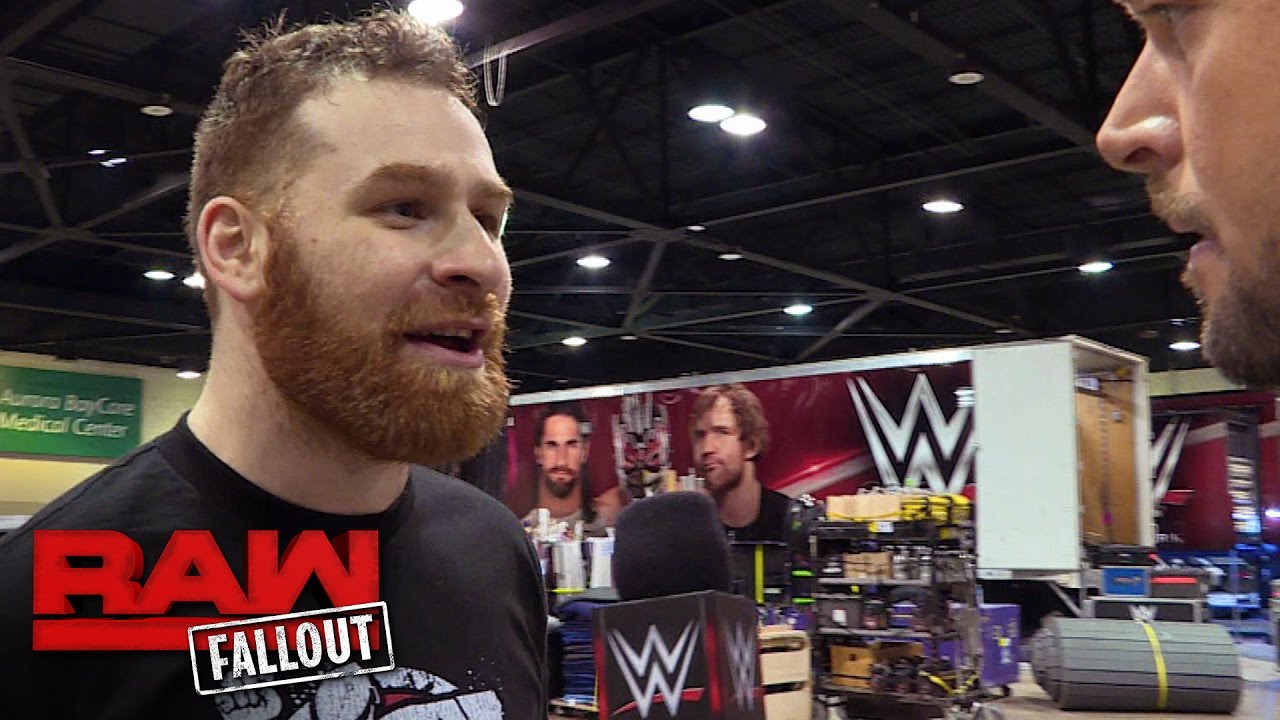 Sami Zayn attacked Samoa Joe during his post-match interview. I feel like these two could have a pretty long feud if given the chance. They definitely contrast enough to make a pretty exciting feud.

Raw had so many short matches that didn’t matter, Shining Stars vs. Big Show, Titus vs. Sheamus, Cass vs. Gallows, Tozawa vs. Dar, Nese/Neville vs. Gallagher/Perkins. Sure, they need to get Show on TV ahead of his match with Shaq. Cass getting in there with Gallows is a preview of the tag title match. Kendrick attacked Dar. Gallagher and Neville will fight over the Cruiserweight title Sunday. Yes, all this makes sense, but 5 minutes doesn’t get me invested in something. I, as a fan, need a lot more than this to really get into a feud. I just don’t think they need to cram everything in each week. Focus on a few things and give them time and then focus on the other stuff the next week.

Raw was great as far as the main segments of the show were concerned, but the supporting segments were a bore and not worth the time as I said above. I like the direction the show is going if they can shore up some of the lower-level feuds and make them matter.

FYIG Plays Family Guy: Back to the Multiverse Part 4 –...