The 3/20/2017 Raw Reaction focuses on the firing on Mick Foley, Reigns getting the better of The Undertaker, Owens ripping up Jericho’s list, and more! 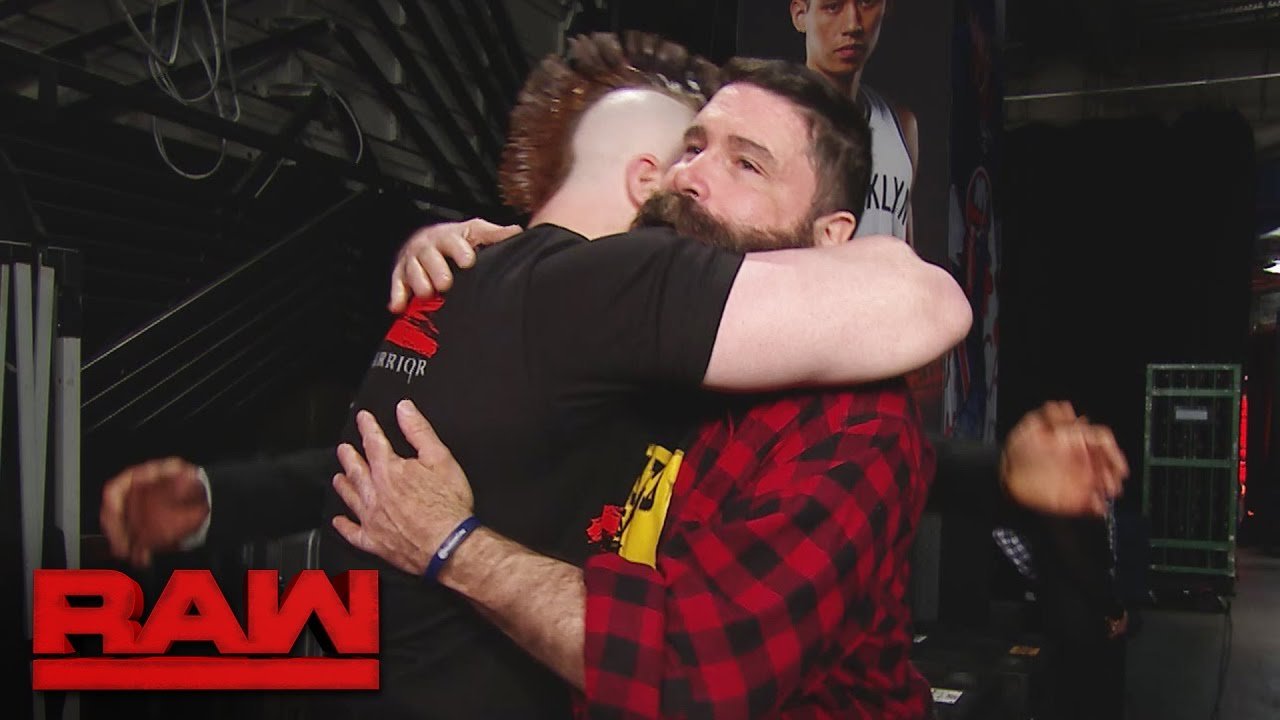 When Foley put Mr. Socko on Triple H last week, I really expected to see him be fired this week and that’s exactly what happened. They should have just done this last week, but they left it as a “cliffhanger” for this week so that people would tune in. It wasn’t really a cliffhanger of course, it was just a way to stretch out a story with an obvious ending. It’s just another chapter in the long story of Foley being made to look like a fool by WWE. Sure, he agrees to it, but at a certain point this man should be honoured on screen rather than put down at every chance.

I am amazed at how quickly Stephanie can flip the switch to full-blown heel. She has been downright evil the last few weeks and it has been amazing. I think Steph has been underrated for such a long time in WWE, she’s one of the best characters they have. The payoffs when she finally gets taken down a peg are always pretty good too. Hopefully Mick will have the opportunity for that type of payback down the line, likely as a run-in at WrestleMania to cost Triple H the match. I’ll also say that I thought the final hug between Bayley and Mick was a fitting way for him to leave before being told to “Have a Nice Day” by Triple H. 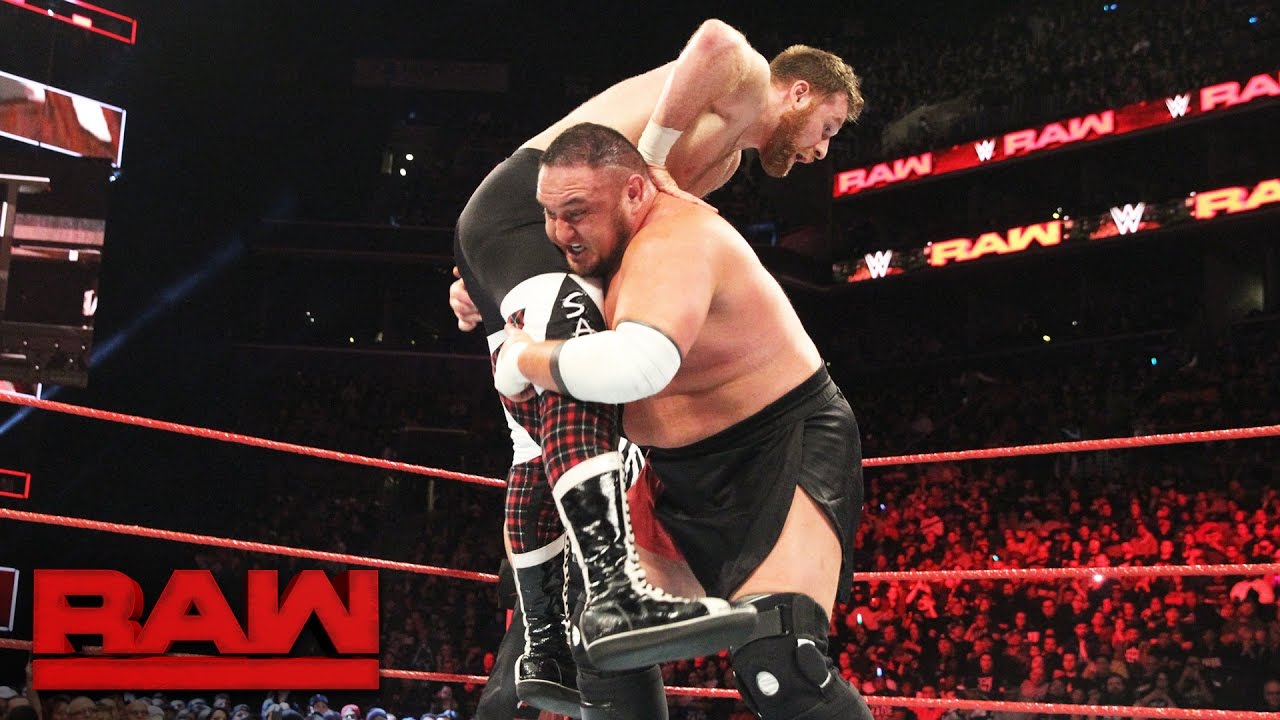 Sami Zayn came out to stand up for Mick Foley as he was being fired and was thrust into a match with Samoa Joe for his troubles. I like the continuity in this story with Stephanie mentioning how she wanted to fire Sami last week or the week before. I also think Sami is starting to hit his stride and play that similar underdog role that Mick played for the bulk of his career. I was worried about Sami staying on Raw to get lost in the shuffle, but I think he’s filling a valuable role right now and it’s going to pay dividends for him sooner or later.

As for Samoa Joe, I can’t remember anyone coming to the main roster with such force with the exception of maybe Kevin Owens. It’s amazing that these two have some type of affiliation and if they really start to work together, it’s going to be a dominant tag team/faction. It’s great that WWE is finally embracing the skill of their performers rather than looking solely at stature as they were for years. It’s creating a much more diverse environment.

Dana Falls To The Queen 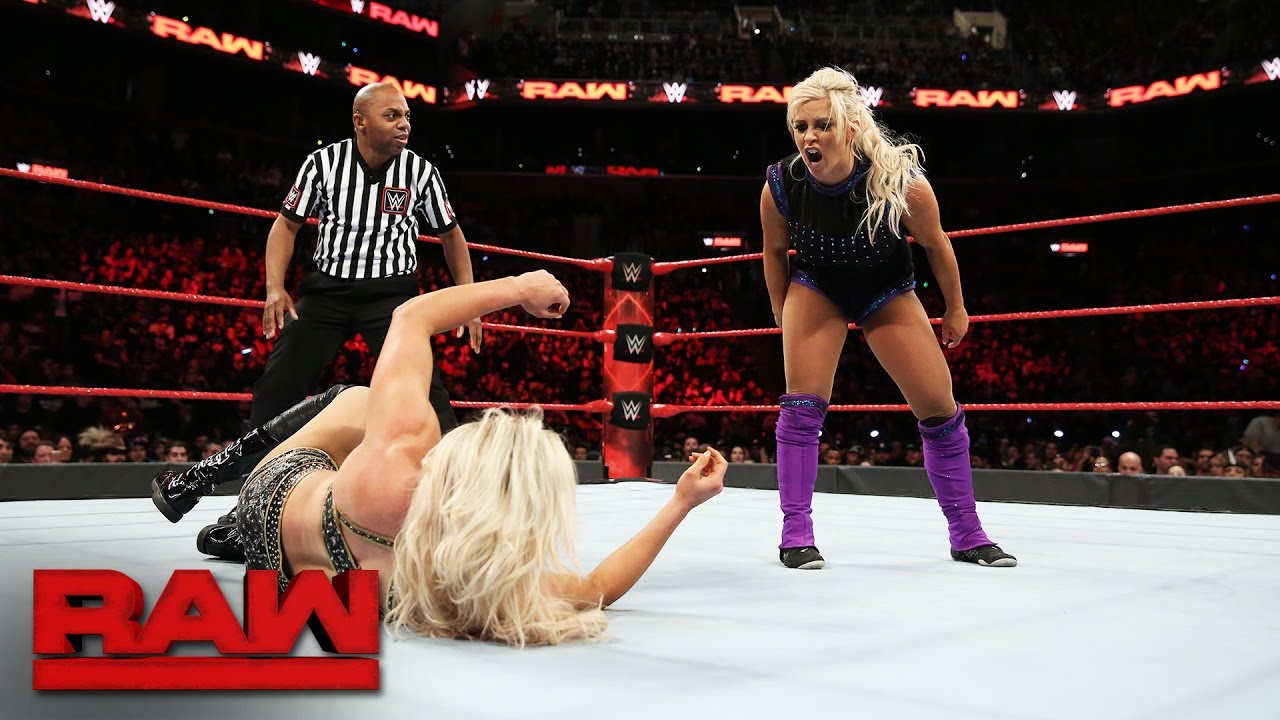 Well, Dana Brooke’s quest for revenge on Charlotte ended in short order on Raw. All it took was a Big Boot from Charlotte and it was lights out. I expected a little more from Dana in this one and I was disappointed that she was nothing more than an after thought. This could have been a good little feud, but it’s likely over now unless she decides to interfere in the title match at WrestleMania. That’s the best-case scenario to me.

Owens Stays a Step Ahead of Jericho 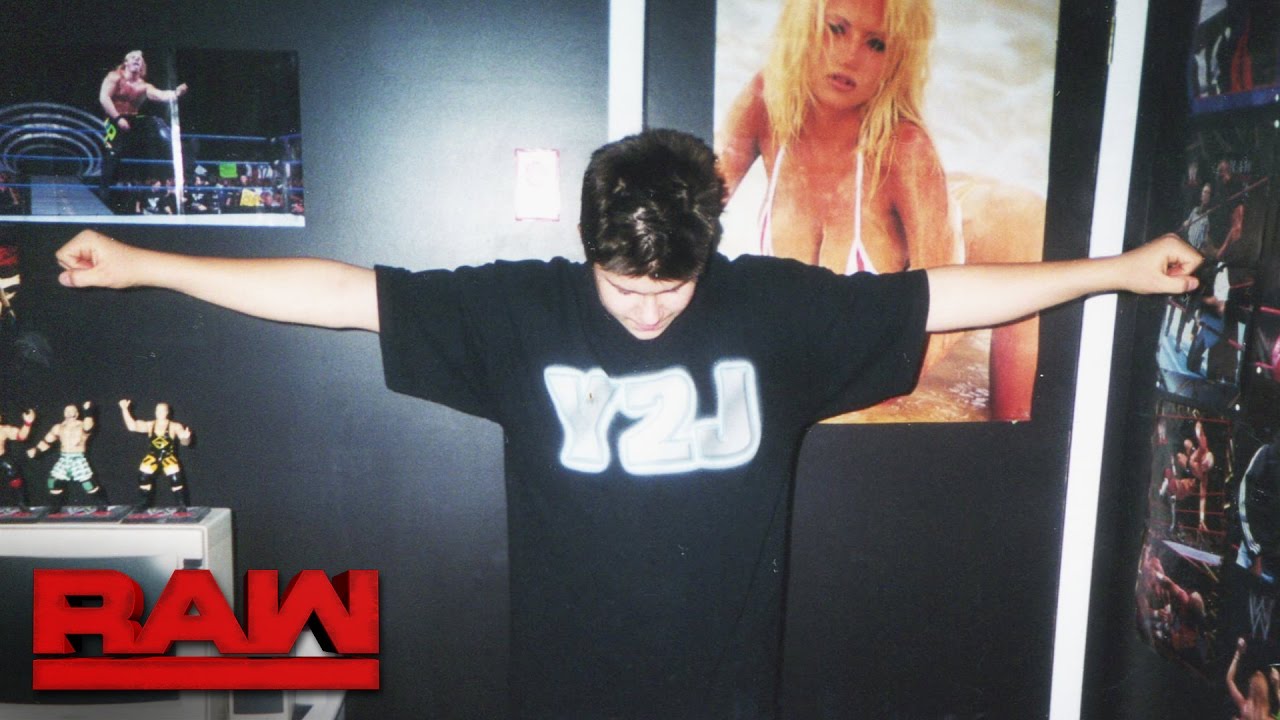 Chris Jericho revealed the real Kevin Owens on The Highlight Reel by showing a picture of Kevin wearing a Y2J shirt at 16 and messages between the two on Twitter with Owens asking for advice. I always like these personal touches in storylines as it makes them feel much more organic. Jericho would attempt to put Owens on the list before being attacked from behind and hit with the Pop-Up Powerbomb. Owens would then rip up the list and do Jericho’s signature pose.

I think that this feud between these two former friends is going to be one of the better matches at WrestleMania. These two have a lot of history together now and they’ll go out of there way to make sure they have a great match. I think there could be more to this storyline by the end of the match. It could easily be used to write Jericho out of storylines considering he will be touring with Fozzy shortly.

Nia Jax Is Going To WrestleMania 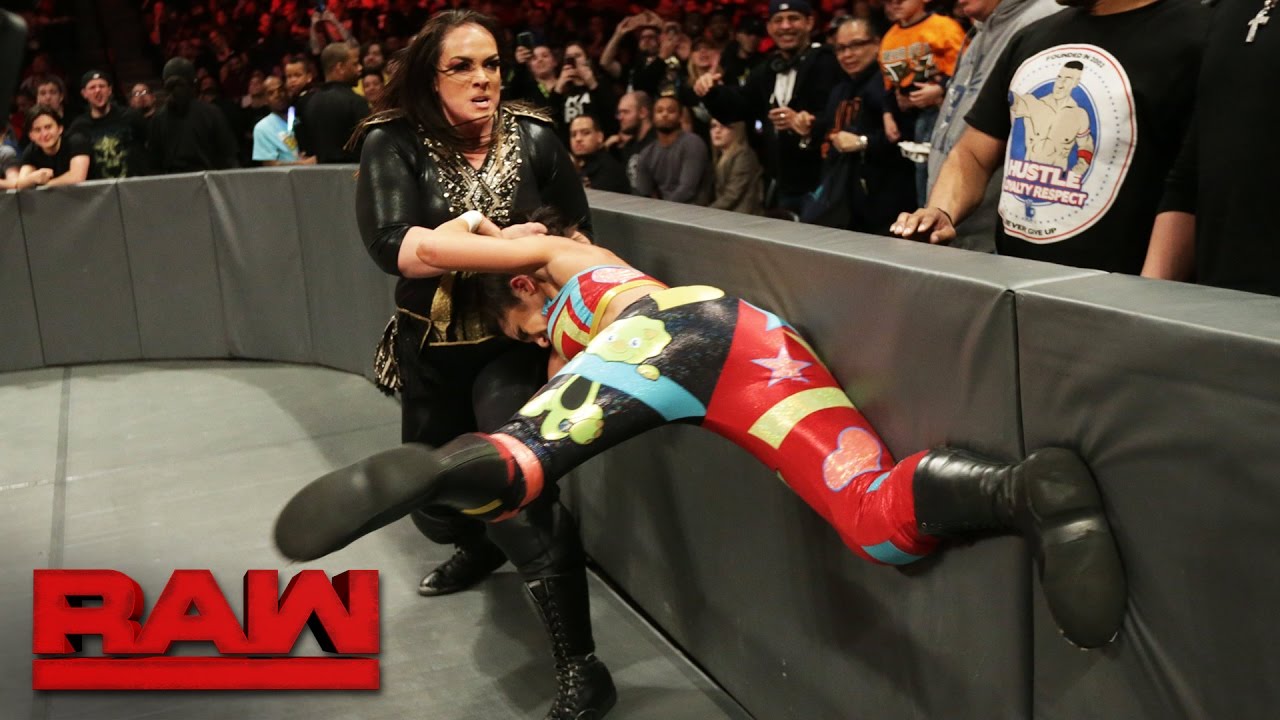 In another case of something WWE could have accomplished weeks ago, Nia Jax beat Bayley in a No Disqualification Match to be added into the Raw Women’s Championship Match at WrestleMania. I mean, we’ve seen this match a bunch of times in the last couple months. This was absolutely not needed. I love Nia and I think she deserves to be in the match, but that should have happened last week. This was a throw away match where then outcome was all but guaranteed. 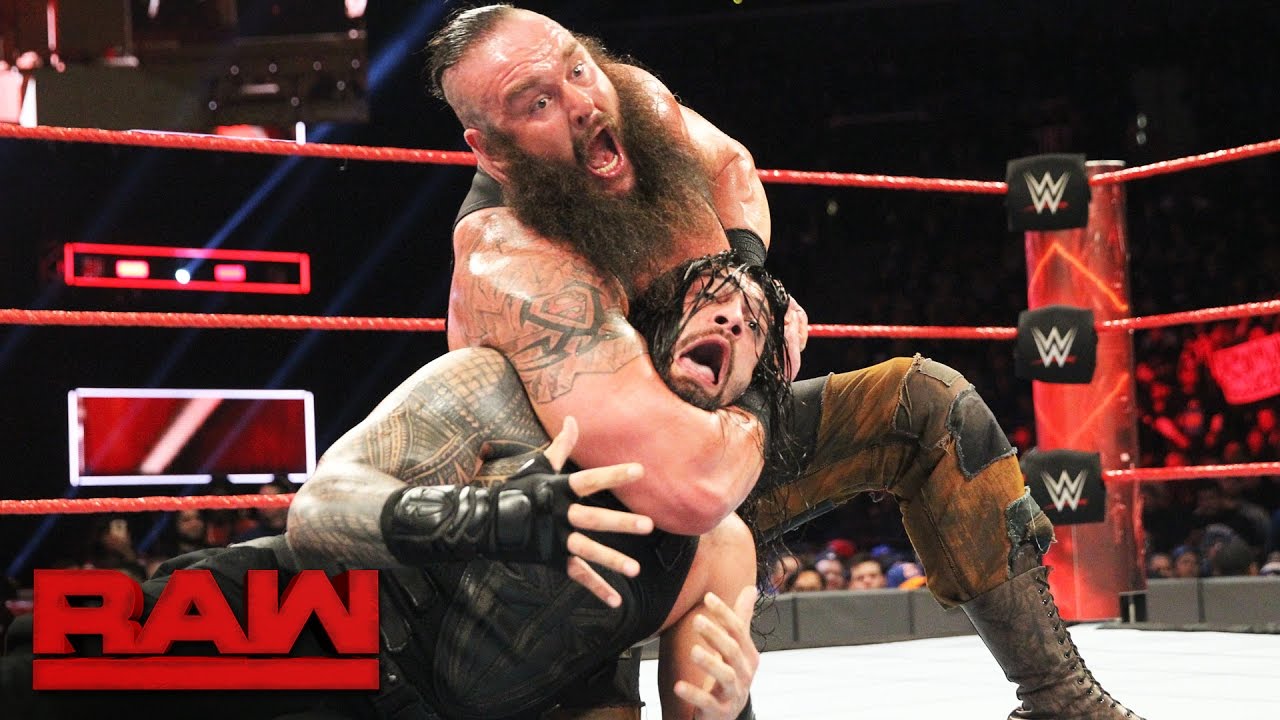 Roman Reigns had another match with Roman Reigns this week. Honestly, I have never seen so many repeated matches on Raw in the history of the show. I can’t even understand how they think any of this makes sense. I want to see something different each week, not the same 5 matches or variations of those. It’s getting to be ridiculous. It’s really hard for me to write an article every week when I’m generally seeing the same things stretched for a month at a time.

Now that that rant is over, Undertaker showed up in the middle of this match and Chokeslammed Braun Strowman before being Speared by Reigns. Yep, Reigns is the one left standing as usual. It’s becoming clear that Reigns may just be the one that puts The Undertaker into retirement for good. I think that Strowman will be added to this match which would be a first in a long time for an Undertaker match at WrestleMania. It’ll also be the first time that I really don’t care about his match. It’s of no interest to me. I feel like it should have been John Cena vs. Undertaker before it’s too late and now, who knows if we’ll ever get to see that. It’s a shame.

Roman doesn’t need to be built up anymore, he’s already in the territory Cena was in from around 2008 to 2012 where everyone was tired of seeing him. I actually like Reigns, but he’s favoured so much that it’s hard for me to get excited to see him because I already know what the outcome is going to be. I get that he’s being positioned as the new face of the company, but it gets to be a bit much. I think if he does happen to defeat Taker at Mania, he’ll be hated by the majority of fans forever. It’s not a great trade off for someone who likely slated to be a face for the majority of his career.

Is The Authority coming back? It sure looks that way with the way that Triple H and Stephanie are running things. Their hired guns are making it look that way too. You can argue they never left, but I really thought we were done with that part of things. The good thing is that Triple H always makes everything seem bigger and better and makes me want to watch, so I don’t hate that he’s made his way back.

Perkins vs. Kendrick #15 happened tonight. Kendrick won. He then showed off Tozawa’s Japanese Passport in another one of his lessons. I’ve liked the whole lesson thing and this one was pretty creative.

It’ll be a 3-Way Tag Team Match for the Raw Tag Team Championships at WrestleMania after Cesaro and Sheamus won a 2 on 4 Handicap Match. Yawn. It’s great and all but the Raw Tag Division sucks. The performers are great, the competition just isn’t there.

Austin Aries continued to tear through the Cruiserweights with a win over Tony Nese while telling Neville his king facade will be over at WrestleMania. This is going to be one heck of a match and I can’t wait to see it!

Emma is still coming. Poor girl, how long is she going to have to wait? She should just be a participant in the SmackDown Women’s Championship Match at WrestleMania, but that won’t happen.

Raw continues to roll through the same matches each week and doesn’t offer much to keep me tuned in. They’re dragging everything along lately and it’s making it impossible for me to look forward to the show. I’m really looking forward to a shake up post-WrestleMania. Raw needs it.

The History of the Ladder Match in WWE

Days Gone and the Importance of Timing