Fastlane 2017 was an exciting night in WWE with multiple title matches including a big title change in record time!  Find out what we thought here! 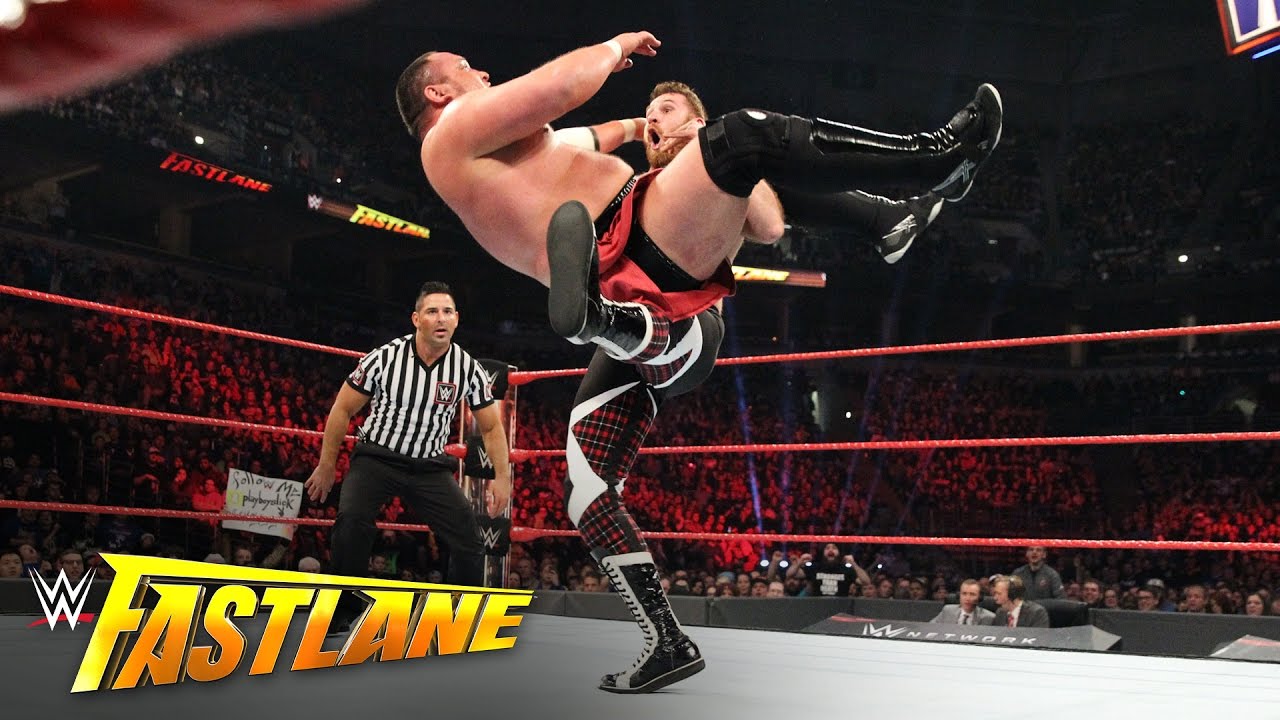 Sami Zayn and Samoa Joe had a very good match to start Fastlane 2017. I really feel like WWE looks at Sami as a good hand to have a great match or get someone else over. I just really hope that they look at him as more than that in the future. It would be a shame if his career doesn’t amount to much more than it has so far. I really feel like he was the perfect first opponent for Samoa Joe. He is the guy who keeps coming even after he’s down and out. He certainly brought some of that spirit to the bout and the crowd was about 50/50 behind each guy.

Samoa Joe ended up winning the match after he choked out Zayn with the Coquina Clutch. I always love that move because it looks so much more devastating than it probably would if anyone else tried to use it. I’m still in awe at how well Joe moves for his size. He and Kevin Owens are very similar that way. Joe continued his dominance of recent weeks and exhausted Zayn with strikes and slams. He was in control for most of the match minus a few moments of resiliency from Zayn. This match wasn’t bad considering they had to throw this feud together after Rollins’ injury. It was definitely a good way to start the show. 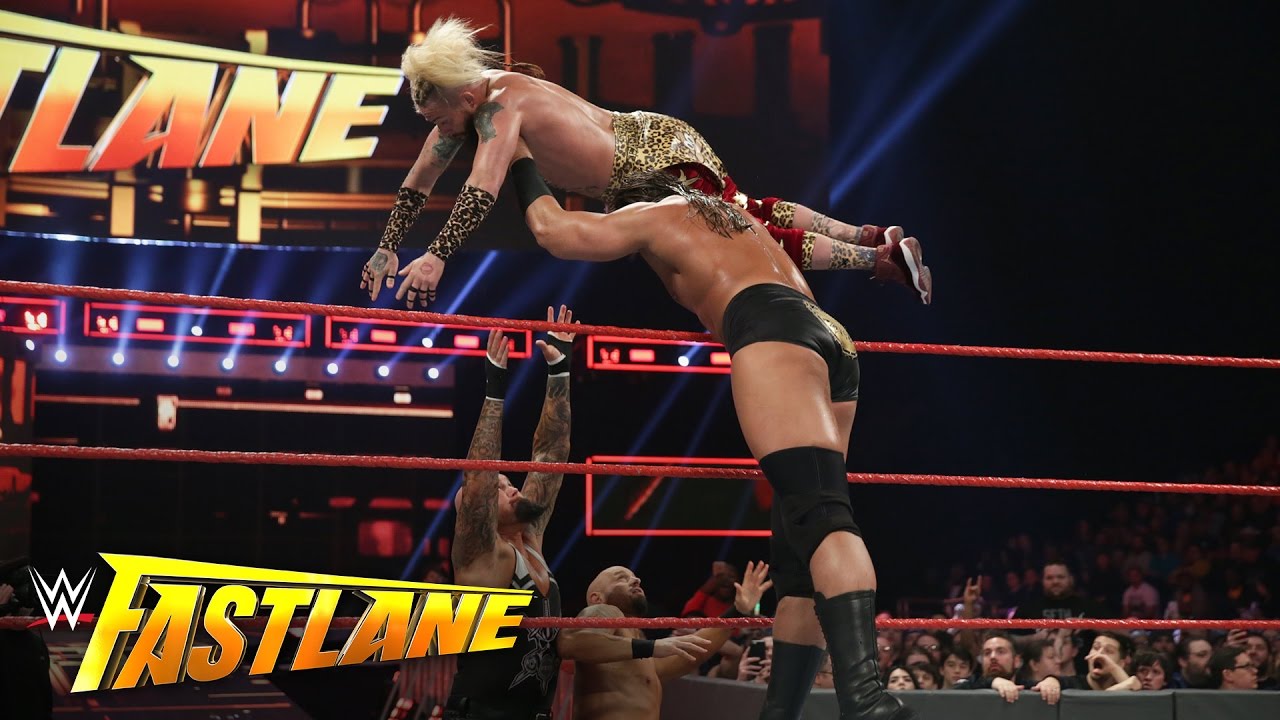 I’m really happy that Enxo and Big Cass didn’t win the Raw Tag Team Championship last night. I feel like that’s a moment that should be saved for WrestleMania considering how popular they are. I think they’re using Enzo well to get a lot of face sympathy as he’s prevented from getting to make a hot tag for long periods of time. It’s a formulaic for this team, but it gets a huge pop every time everyone enjoys seeing Big Cass clear the ring.

I’ve been really impressed with Gallows and Anderson for really embracing their heel nature. These guys won the match by shoving Enzo’s foot off the rope before the referee saw it and then he counted to 3. It was a perfect way to win while still allowing Enzo and Cass to keep their momentum. WWE has been making a lot of great choices like this lately to protect their stars even in a loss. I don’t like it when it’s done all the time, but this time made a lot of sense and will undoubtedly set up a rematch.

Sasha Gets The Surprise Victory Over Nia Jax 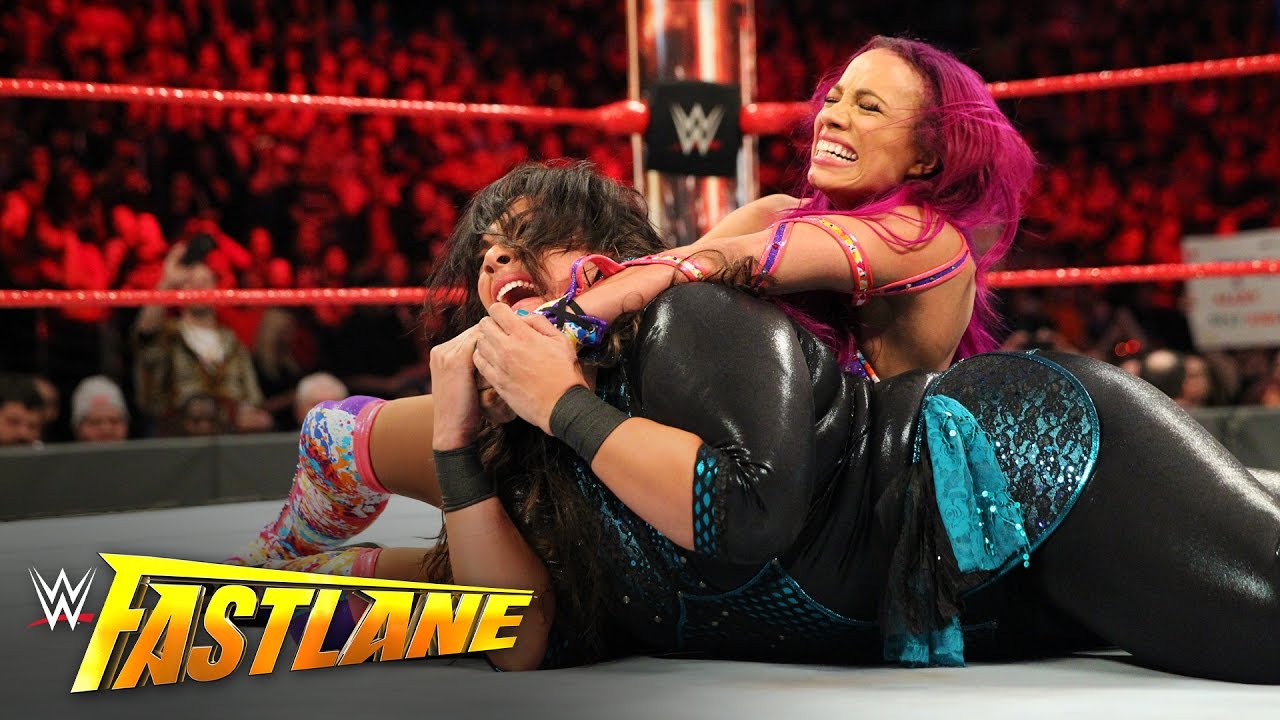 Well I really didn’t see this one coming! Sasha Banks somehow pulled out the victory over a stunned Nia Jax with the roll-up. Nia looked like she was going to get a pretty easy win after toying with Sasha for most of the match. It’s crazy how much punishment Sasha has taken in the past year and I do wonder whether her career may be shorter because of it. She, more than anyone else, takes some pretty nasty bumps and I do worry that one of them could cut her career a lot shorter than it should be. Hopefully that’s not the case. 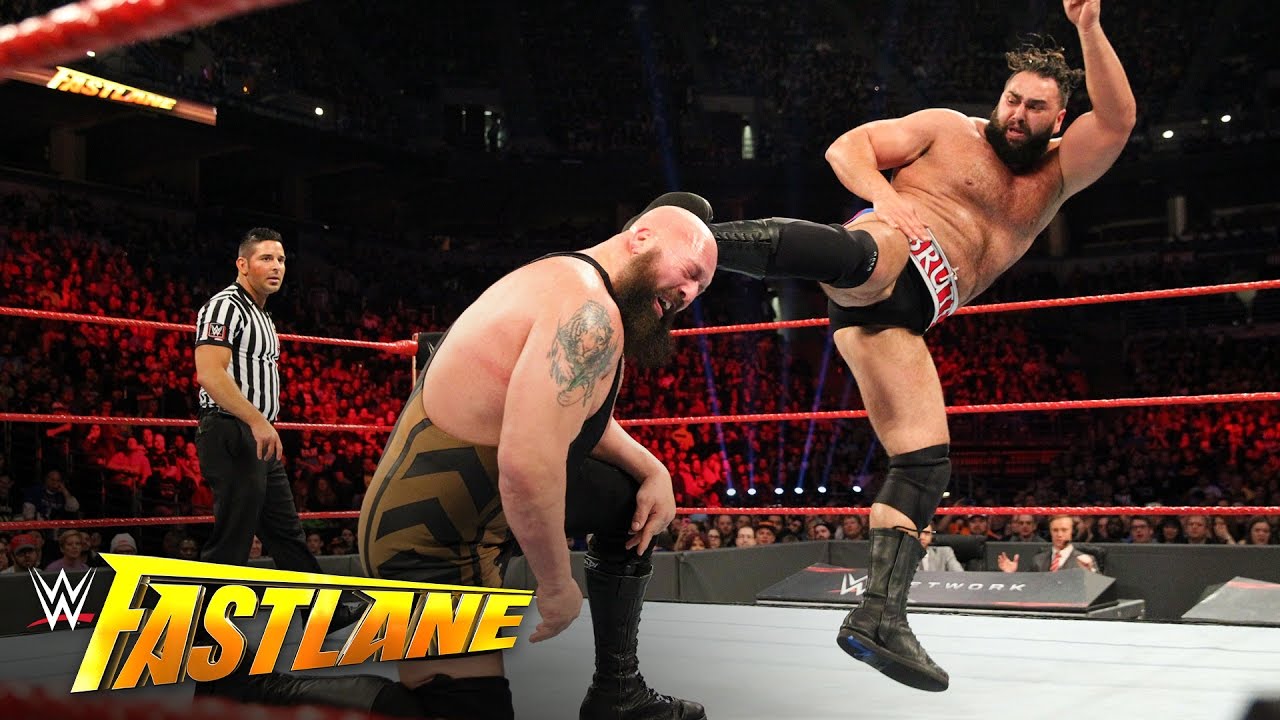 Jinder Mahal and Rusev both wanted to go the singles route from now on and so Mick Foley gave them both surprise opponents. The two fought before the matches and Rusev ended up thrown into the timekeeper’s area. Cesaro came out to be Jinder Mahal’s opponent and ended up defeating him. Rusev would then clear Jinder from the ring as the Big Show came down to fight Rusev. Show is in the best shape of his life and yet again, he had a pretty good match with Rusev. He’s been great lately and I really hope he’s able to have one last good run before he retires.

I really don’t get what they accomplished with this besides getting Show some ring time before WrestleMania against Shaq (which is up in the air right now). I think they just needed to fill time and this accomplished it fairly easily. It bored me for the most part until the Show/Rusev part. 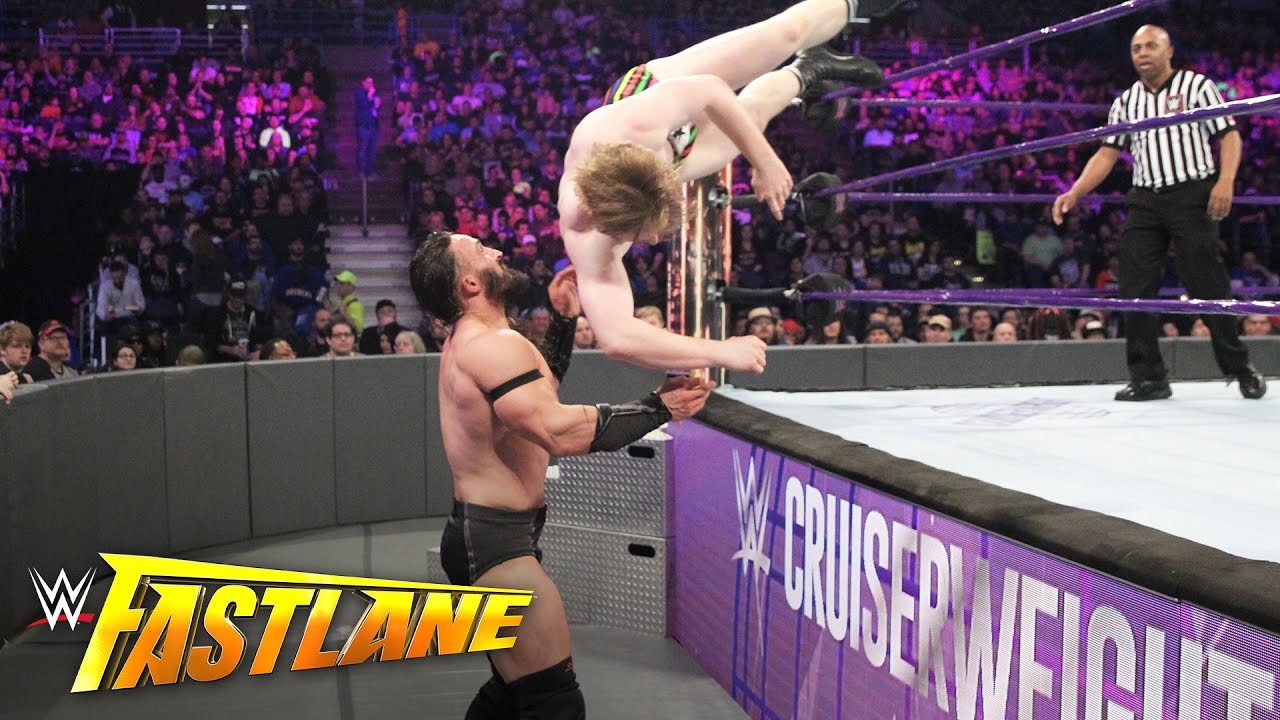 I really liked the contrast in character between Neville and Jack Gallagher in this Cruiserweight Championship match. Neville is the brooding heel while Gallagher is the happy-go-lucky gentleman who always pulls out some weird tactics in the middle of the match. These two had a pretty good match together in all honesty. They were given a lot of time and there was some nice back and forth between the two men. It’s crazy how hard Gallagher hits those headbutts at times!

Neville would win the match with the Red Arrow which we haven’t seen for a long time. I’m glad he brought that back as it’s one of the most unique moves in wrestling. I don’t think this feud will be continuing, but I wouldn’t mind these two having another match. 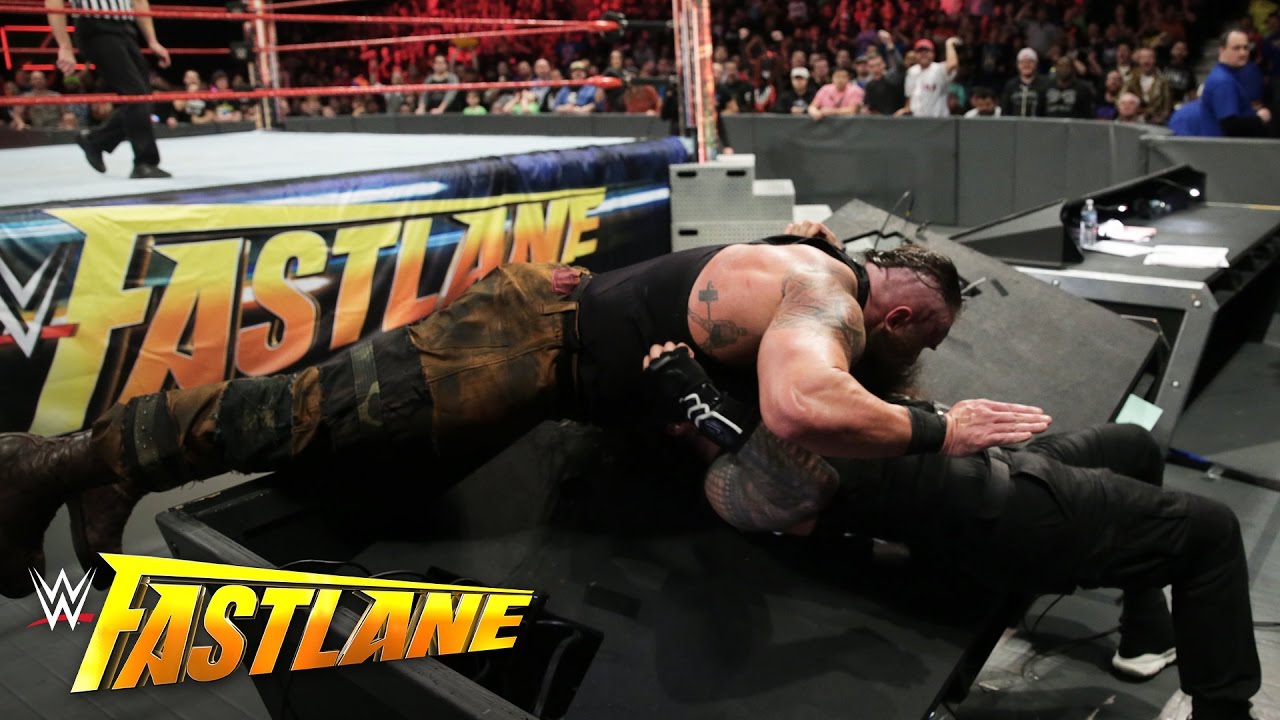 I can’t believe it, but Roman Reigns defeated Braun Strowman at Fastlane after missing a giant splash and hitting a Spear. I don’t know what Strowman will do after this, but this match almost seemed completely unnecessary for me. I know that Reigns is probably being groomed to face The Undertaker at WrestleMania so he needed to look as strong as possible heading into that. I just feel like this made Strowman look a lot worse than he needed to. If Reigns can beat him, a lot of other people can too. At least that’s how I’m looking at it.

I guess my point with all of this is, Reigns already looked strong. Strowman might not be able to reclaim that aura that he had after being beaten like that. That’s the tough thing with having a monster heel, one thing can derail all of their momentum. These two both took it to each other so, they may both come out better than before but, still. 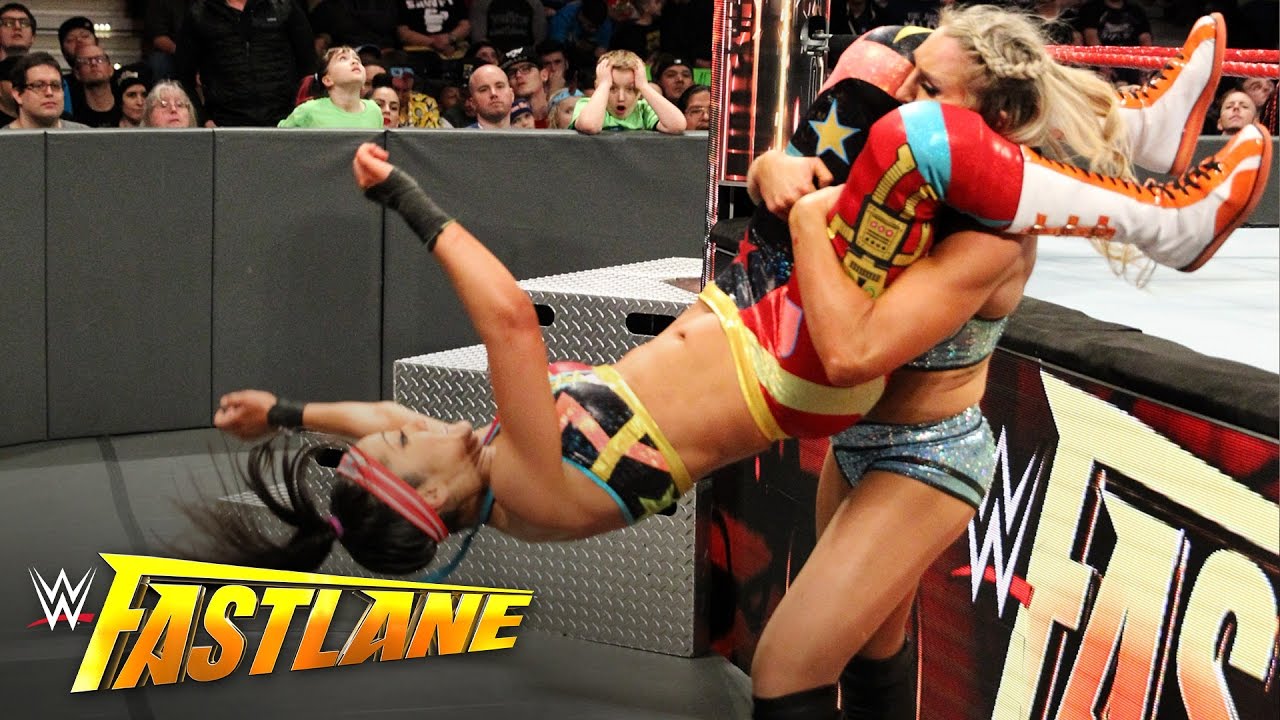 The Raw Women’s Championship picture is becoming murkier by the day. Sasha Banks once again distracted Charlotte long enough for Bayley to hit the Bayley-to-Belly and get the 3-count to retain her title. My question is: Why on Earth does Bayley constantly need help now and where is this going to lead? Is Sasha going to all of a sudden turn on her and then try and fight her for the title at WrestleMania? Is it going to be all 4 girls against each other for the title? I don’t know, but Charlotte’s PPV record streak is now over and Bayley is still champion. I’m more interested in what’s next on Raw tonight. 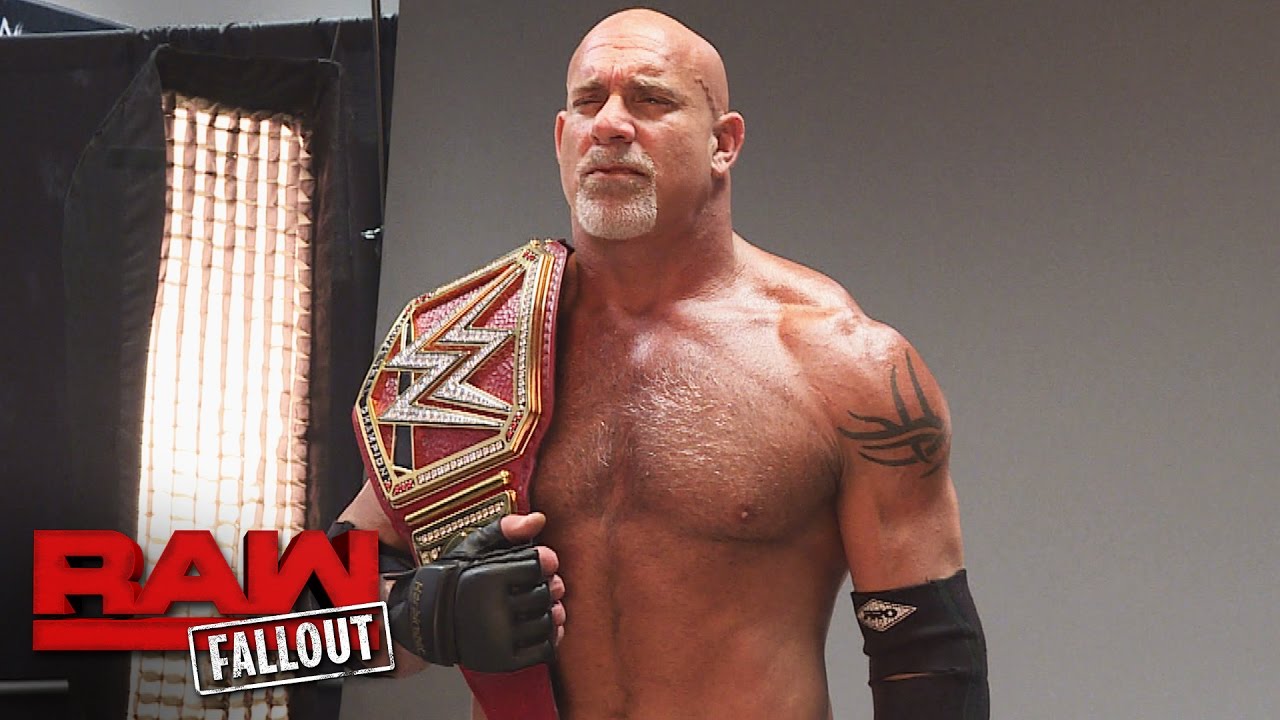 Just as I thought, Goldberg defeated Kevin Owens after Chris Jericho returned and distracted Owens into a Spear and Jackhammer for the 3-count in 21 seconds time. This was so predictable that it should have gone on first. I really don’t have much else to say on it as it was to be expected leading into his encounter with Brock Lesnar at Wrestlemania. Good for Bill Goldberg, though. He still has that magical presence about him that makes him worthy of being the Universal Champion. It was a cool moment regardless of whether you’re a fan of his or not. He is a quick match guy and that’s exactly what we got out of him.

I do feel sorry for Owens who had to drop his title just as he was hitting his stride again. I don’t think this will be the last time we see Owens as Universal Champion and he’s likely to win the US Title from Jericho at WrestleMania. I’m really excited for the feud between the former friends. I feel like it could easily be one of the better WrestleMania feuds.

Fastlane 2017 bored me quite frankly. I think I could have guessed the whole show with little trouble. The matches were decent, but none of them felt like they were must-see. That troubles me with less than a month to WrestleMania. It’s probably the least anticipated WrestleMania for me in recent memory, but the real road starts tonight, so we’ll see. I really think they could have done without this event so close to the big show.