The Ultimate Thrill Ride is finally upon us as WrestleMania 33 took place Sunday night. Check out what we thought about the biggest show of the year! 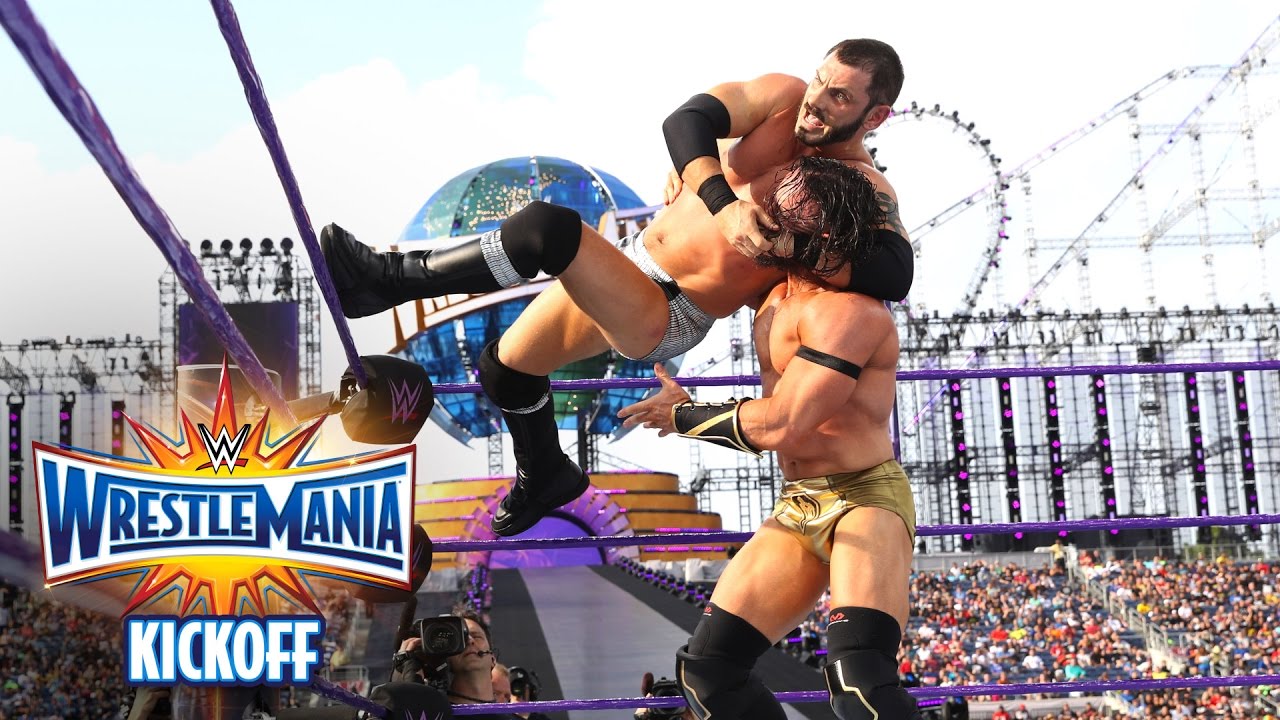 Austin Aries made every effort to defeat Neville, but an eye poke derailed his entire match as Neville hit the Red Arrow for the 3-count. It was a match that saw each man have control for a short while of time, and just as it seemed that Aries would win with Last Chancery was the point at which Nevile poked the eye. I like the way this sets up a potential rematch at Payback or possibly on 205 Live. I think these guys definitely did a great job in the very first match of the night, I probably would have preferred this match being on the main card rather than one of the other ones in hindsight. 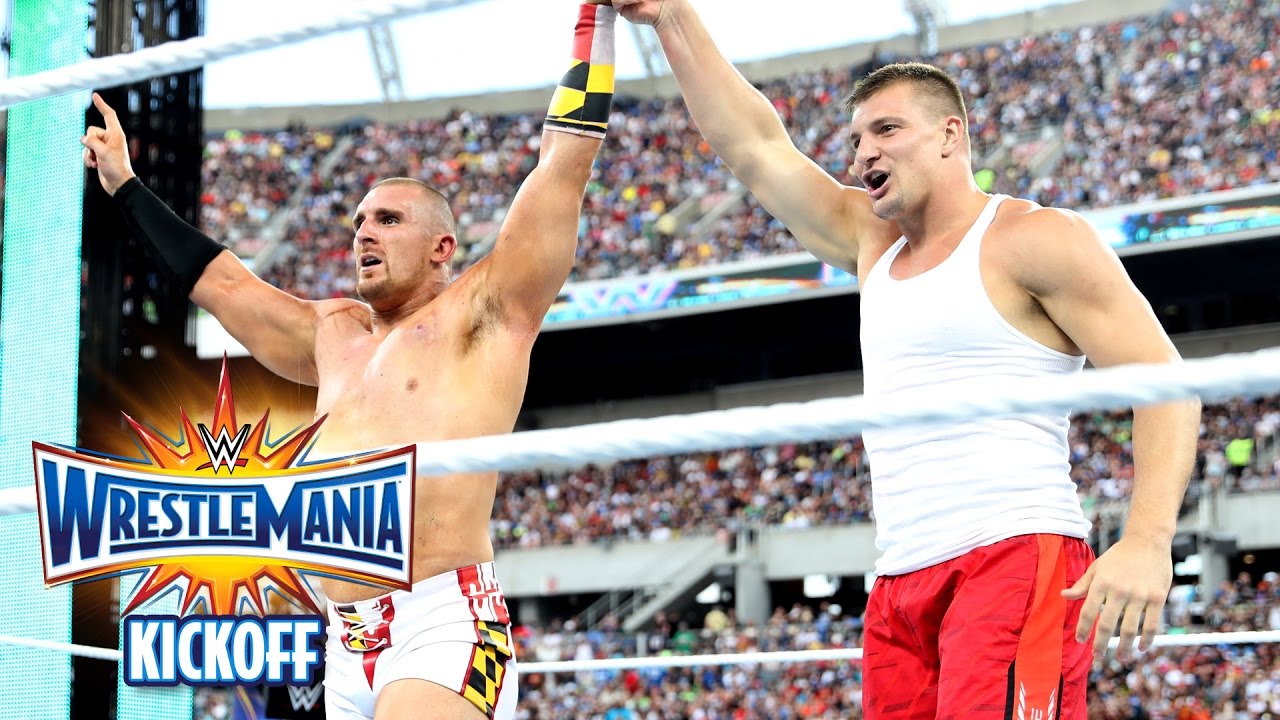 This Battle Royal was interesting in that it included 2 of the WWE’s biggest Superstars in Braun Strowman and The Big Show. Oddly enough, both guys were eliminated relatively early which created some suspense as to who would actually win the match. It was bittersweet knowing that this was the end for The Big Show. What a great career he had! I feel like he deserved to go out in a bit better of a way. Maybe he’ll get a send-off on Raw?

The story if the match was all about New England Patriots TE Rob Gronkowski. Jinder Mahal walked over to him and tossed his drink in Rob’s face. This caused Gronk to go in the ring and tackle Mahal in the middle of the ring. Shortly after this, Mojo Rawley would toss Jinder over the top rope to win the match. Had it not been for Rob’s involvement, I can’t see any other reason for Mojo winning. It didn’t seem like they had any plans for him before this and I don’t see that changing now.

Tian Bing and Killian Dain from NXT both had decent showings with Dain making the final 3 and Tian Bing having a couple eliminations. I like that they give that opportunity to a couple different guys each year and those two were decnt choices. We haven’t seen much of Bing before so it was interesting to see what he’s about. 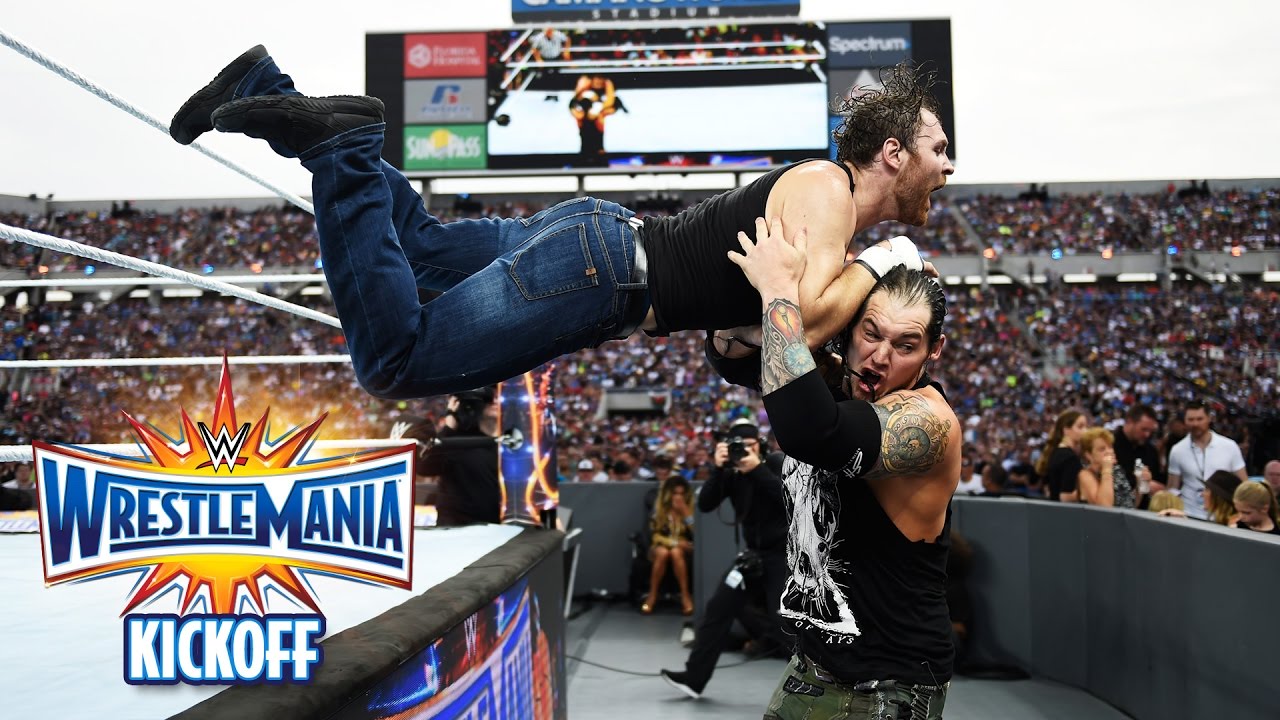 Dean Ambrose and Baron Corbin were moved to the pre-show and judging by the match they had, that was probably a good idea. This seemed more like a match you would see on SmackDown than a match that was worthy of WrestleMania. This isn’t a knock on either guy, they just weren’t given any time to really do anything too spectacular. It’s sad to me because I feel like these two have consistently been shoved aside for other things and they definitely deserved better than that.

I feel like Baron Corbin did a great job at making himself look like a dominant heel and he really attacked Ambrose’s ribs early and often to make it seem like he’d take the easy victory. It wasn’t to be, though, as Ambrose reversed End of Days into Dirty Deeds for the pinfall. I really think that these two are going to have a rematch on SmackDown where Corbin will win the title. I just don’t see the value in keeping it on Ambrose right now which is why I picked him to lose. It’s not that he isn’t a good champion, it’s more that Corbin is ready to do something more. 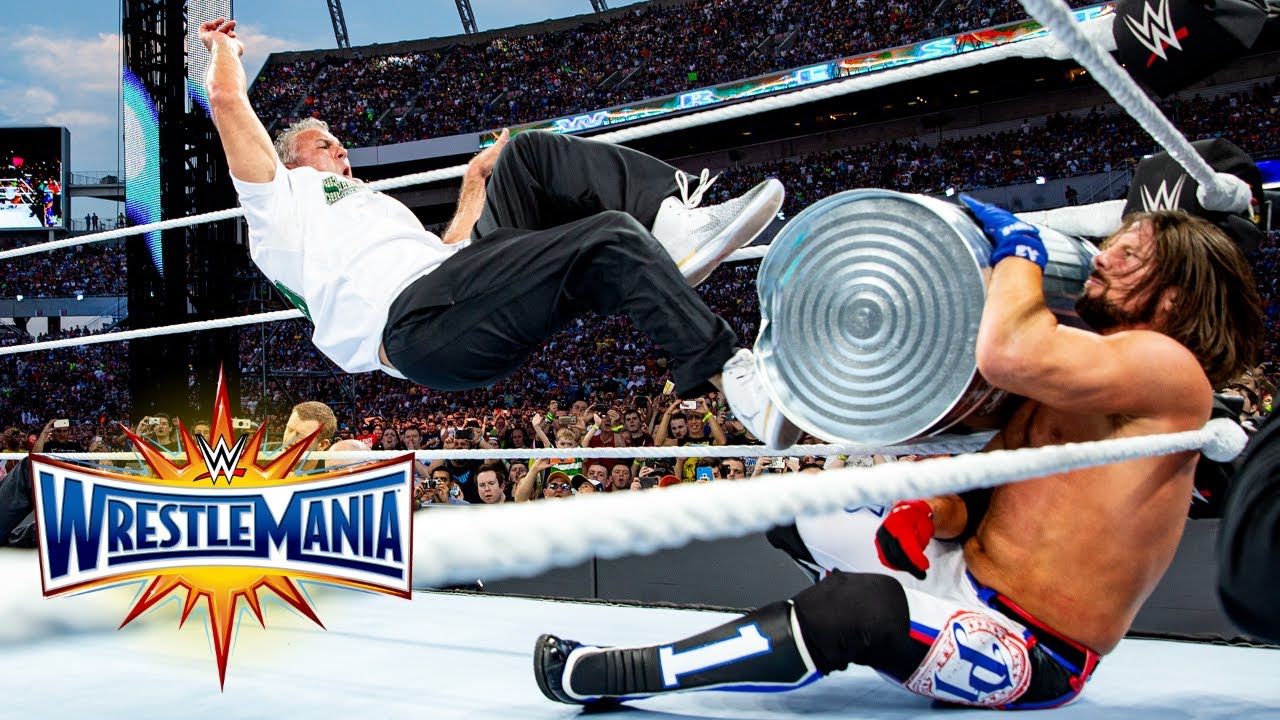 For everyone that said that Shane McMahon would never be able to keep up with AJ Styles in the ring, they certainly did a good job covering up that fact. Shane got a nice amount of offence in and actually put AJ in quite a few holds. The crowd was firmly on AJ’s side and didn’t really show Shane a lot of love until he hit a Van Terminator.

Shane did end up losing to AJ in the end, but I feel like this match was better than everyone expected it to be. I do wish Shane would have had a match where he could have showcased his fearlessness more and that AJ would have had an opponent that would have meant more. In the end, this one was a decent opener, but nothing anyone is going to remember for years and that’s probably why it went on first. I’m just glad both men got their chance to be at WrestleMania. 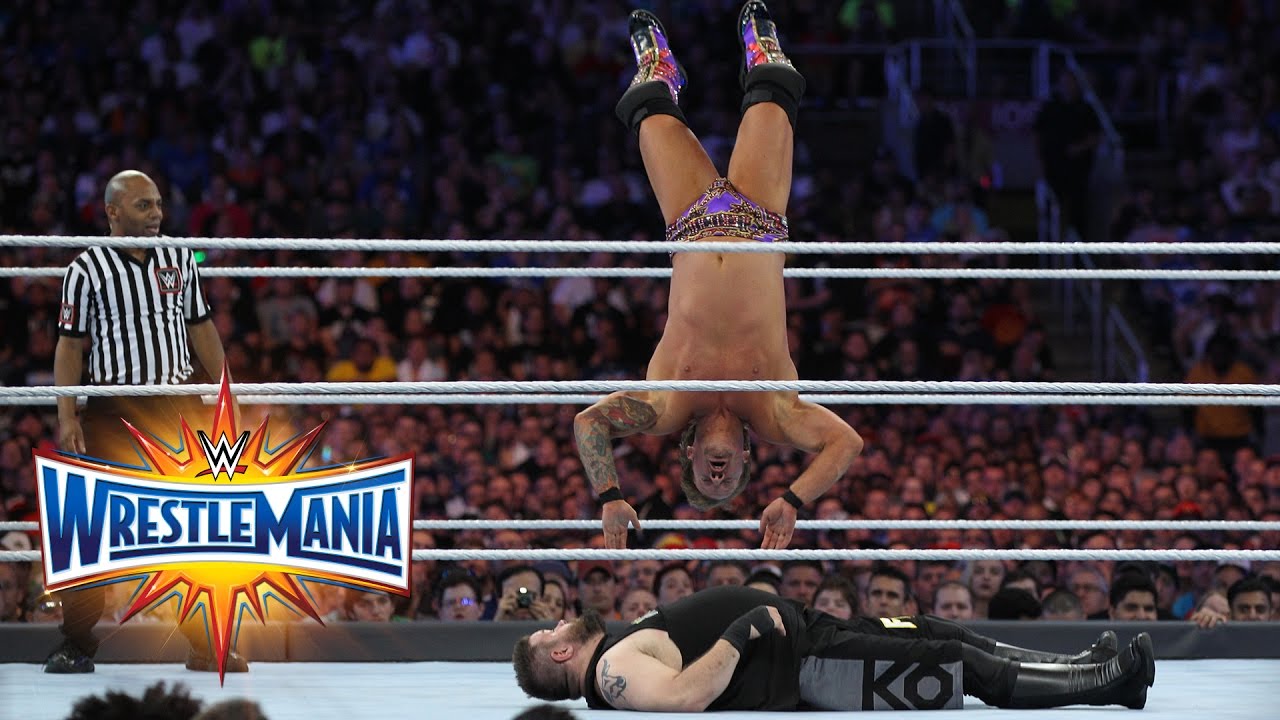 Kevin Owens and Chris Jericho had a pretty physical match that was worthy of the lengthy friendship and then feud that they had. I can’t believe how good Chris Jericho is at the age of 46. He’s every bit the performer that he always was and it’s been great to see him stick around with WWE as long as he is. I think that Jericho will be taking some time off from WWE pretty imminently as he has some Fozzy commitments to fulfill, but he did a great job building Kevin Owens to be the dominant star that he’s destined to be.

Owens did win the WWE United States Championship from Jericho after a tough match and he looks poised to be that dominant Superstar that he was when he came in. These guys did a great job and I really think it was one of the best matches, wrestling-wise, of the night.

At the first mention of a ladder match, the team you think of most is The Hardy Boyz. Those two guys practically invented tag team ladder matches. Going into the match, those two weren’t even in the company, let alone the match. In fact, The Hardy Boyz wrestled for Ring of Honor just last night. None of that mattered as The New Day announced a new team competing in the match and out came Matt and Jeff Hardy to one of the biggest reactions I’ve ever heard. Half the crowd already suspected they’d be in the match and were ecstatic to see them, half were surprised and even more ecstatic to see them.

The match itself was highly entertaining. Sheamus and Cesaro impressed me with the way they were knocking people all over the place. Everyone had their moments, I really feel like everybody involved made that match a memorable one. Of course, Jeff Hardy did manage to leap off a ladder and put Cesaro through a ladder at ringside. Big Cass got some pretty hard shots in on a few people and I really see him starting to come into his own as a bigger star.

The Hardy Boyz did walk out of WrestleMania with the Raw tag team titles after Matt got them for his team right after Jeff’s leap off the ladder. It was a fitting way to come back home for The Hardys who have really come full circle. It remains to be seen if Matt will be able to use the “Broken” character. I don’t think he will, at least right now as this seemed like they’re going to use the same characters they portrayed in WWE. Either way, it was an unforgettable WrestleMania moment! 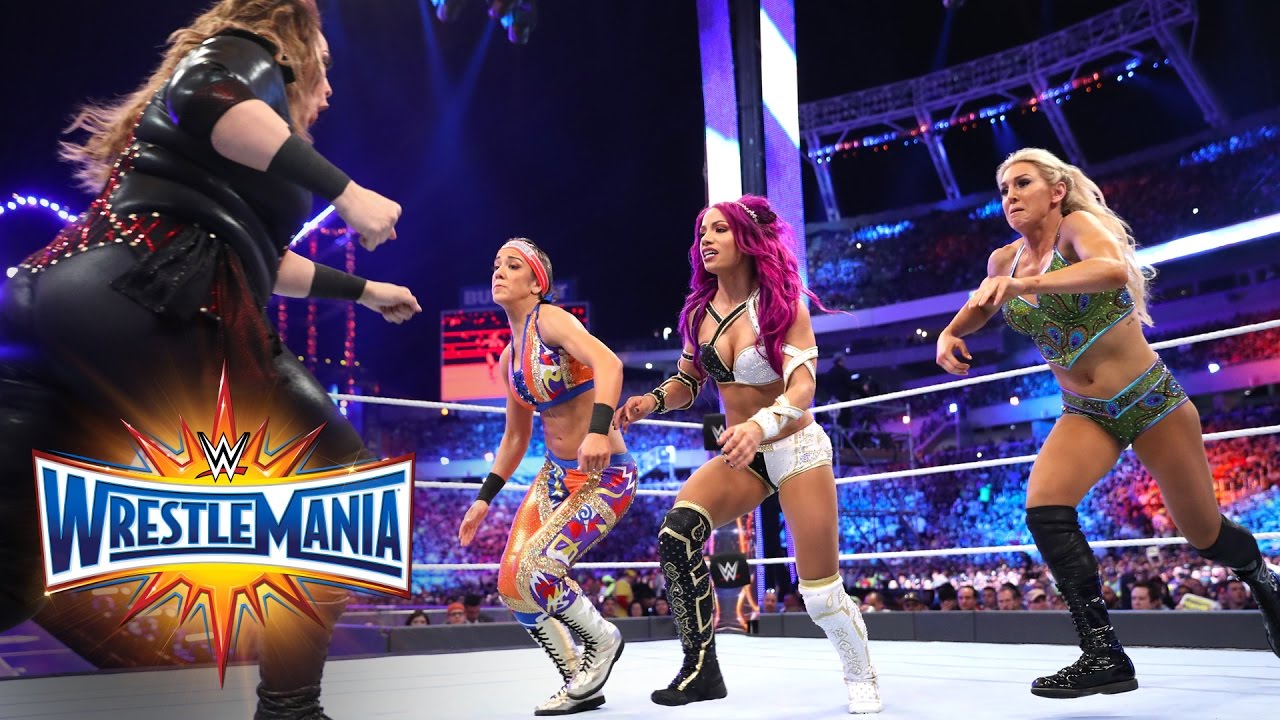 The battle over the Raw Women’s Championship has been a crazy mash up of these four very talented women. All of these women except for Nia Jax have won the title in their young WWE careers and I was one of the people that thought maybe we would see Nia get her first reign. That didn’t happen as Nia was eliminated first by all 3 of the other women. It was a pretty cool moment to see all 3 pin her at once.

Sasha would be eliminated after being launched into a semi-exposed turnbuckle. I thought this was kind of weak because it wasn’t really exposed at all and they did nothing to make it look like it was. I was more disappointed that there wasn’t really any dissension between Sasha and Bayley in this match. They had some friendly competition, but it wasn’t like there was any heel turn by Sasha which I felt would have been really cool to see. I guess there just aren’t enough women who are faces on Raw to do that at the moment.

Charlotte would go after Bayley’s knee for most of the match. I’m really tired of seeing exploited knee injuries in WWE. Sasha, Nakamura, Gargano, Bayley, and Rollins have all had knee injuries in recent months. It’s too much. If the person is actually injured, fine, but it gets a little crazy. The best moment came when Bayley won the match with a Macho Man elbow in tribute of one of her favourite Superstars of all time. She proved she belonged in not only the storyline, but reality as well. It was the culmination of an almost 4 year journey for Bayley. No on deserved it more and I’m glad WWE decided to keep the title on her.