The 5/15/2017 WWE Raw Recap and Analysis features our thoughts on a Kendo Stick on a Pole Match, the IC title match on Raw, and a whole lot more! 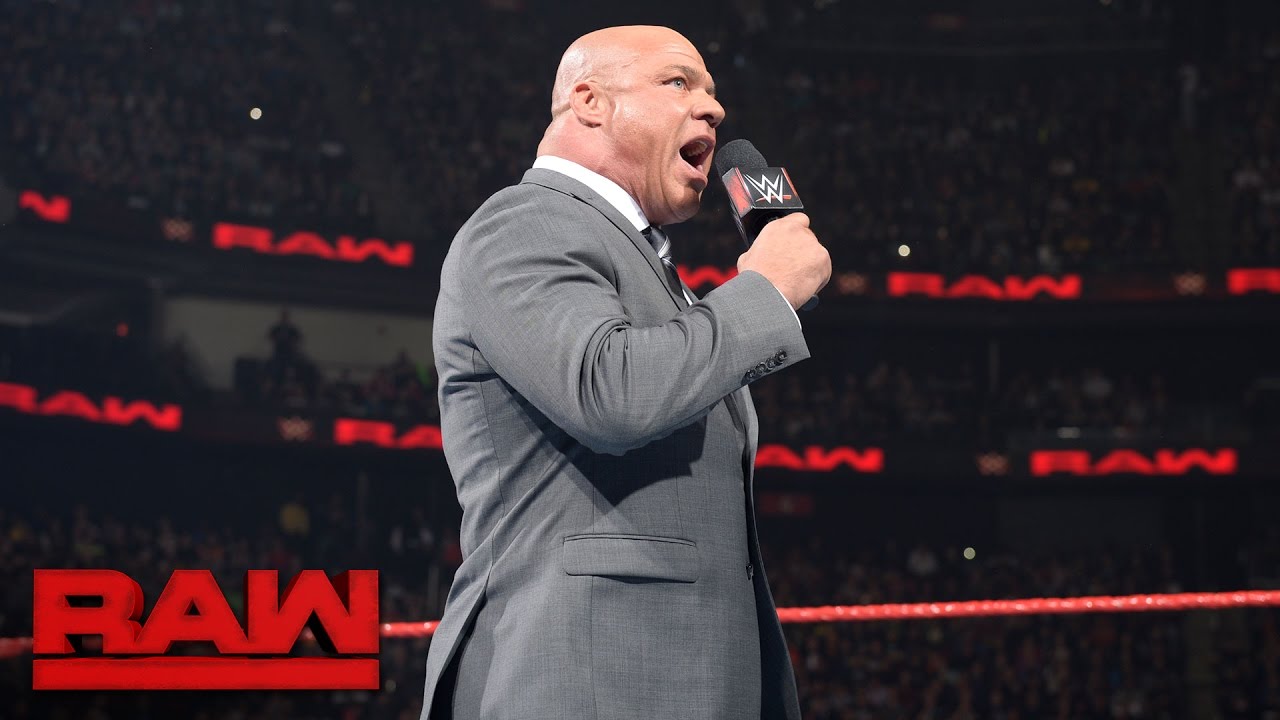 Raw GM Kurt Angle came out on Raw to announce that Braun Strowman would be out of action for up to 6 months due to an elbow injury. He said that Braun had his sights on the WWE Universal Championship, but now he has to figure out a new challenger for the title. Kurt would set up a Fatal 5 Way Extreme Rules Match at the PPV of the same name with the winner facing Lesnar for the title. Kurt then announces the competitors as Seth Rollins, Bray Wyatt, Samoa Joe, Finn Balor, and Roman Reigns. That’s actually a really good main event for that show and I’m pretty excited for it. Of course, everyone came out and started fighting after that. I mean, it happens every Raw so we had to expect it right? Finn Balor ends up being the last man standing in the ring.

After the commercial, Kurt sets up Bray Wyatt vs. Seth Rollins and Finn Balor vs. Roman Reigns for later on Raw. 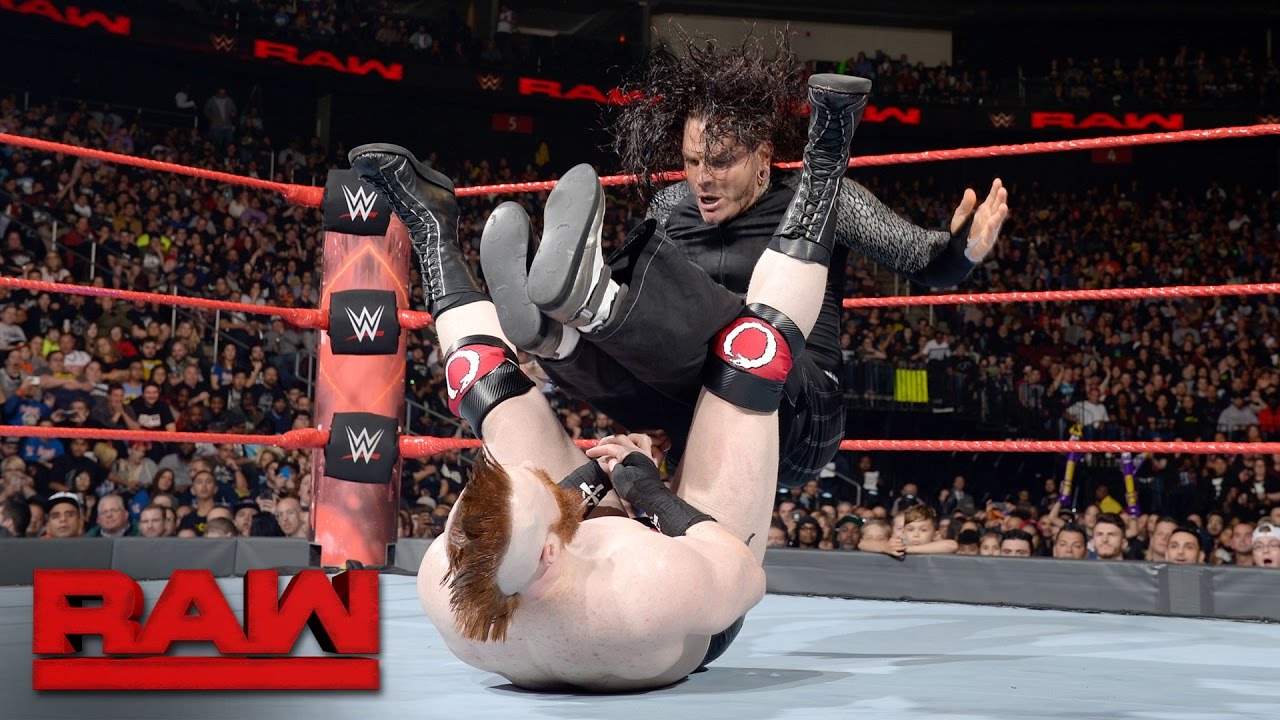 Here we go with another singles match between members of these two teams. I’m not complaining, this is the best tag feud we’ve had since Raw became its own brand. I love the new attitude of Cesaro and Sheamus, these guys simply tweaked their characters to be a bit more vicious and that has paid huge dividends. I got a kick out of the Brother Nero chants to start the match.

These two guys had a really back and forth match. Every time Jeff looked like he was going to win, Sheamus would kick out and vice versa. All that came to an end as Matt stopped Cesaro from interfering and got a Brogue Kick for his trouble. Well…2 Brogue Kicks since Sheamus missed the first one. I don’t know why Matt didn’t help it along, that spot looked really bad. Jeff would take advantage and hit the Twist of Fate and Swanton Bomb for the win. 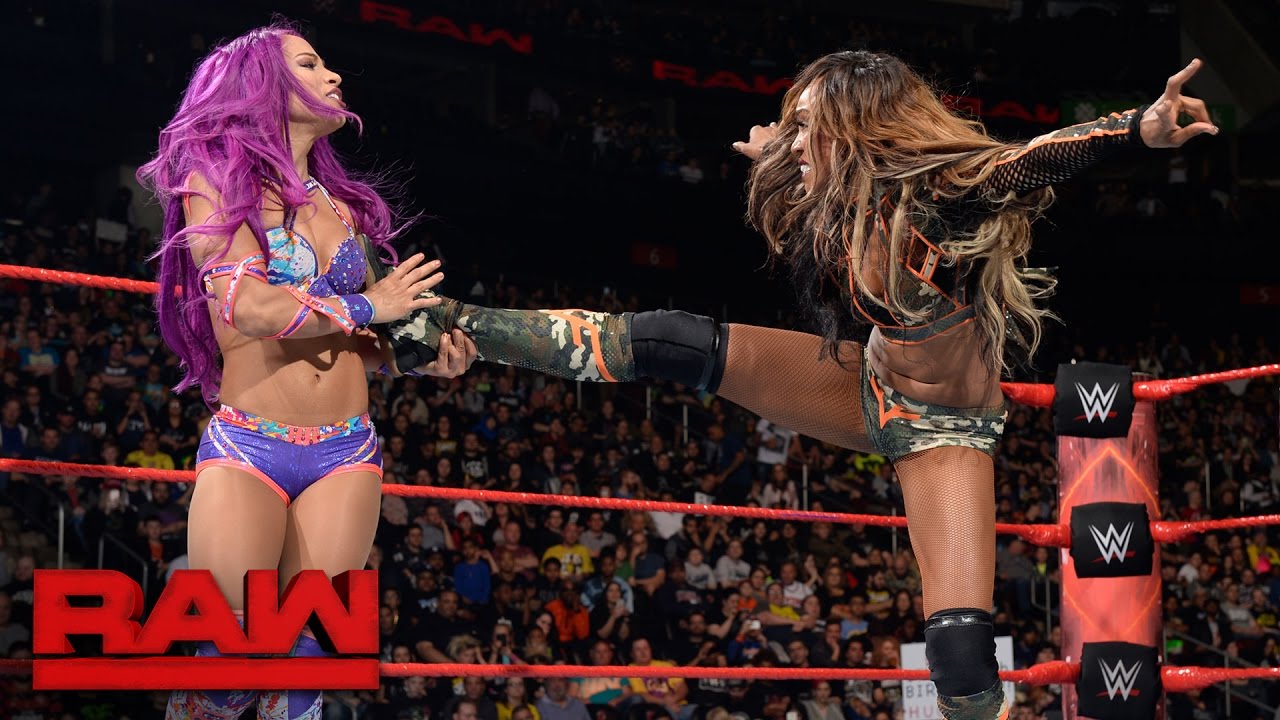 This match came about after it was revealed that Alicia kicked out of the pin last week, but the referee still counted to 3. I think that was a mistake, but it’s nice to see WWE covering their tracks and making it right this week. Alicia Fox got the surprising victory over Sasha after dumping her over the top rope and then giving her a Scissor Kick for the 3-count. I’m shocked. I’ve never seen Sasha lose that quickly. I hope this isn’t the last we’ve seen of these two women. They seem to be building a nice little feud here.

Dean Ambrose (c) vs. The Miz w/ Maryse for the WWE Intercontinental Championship 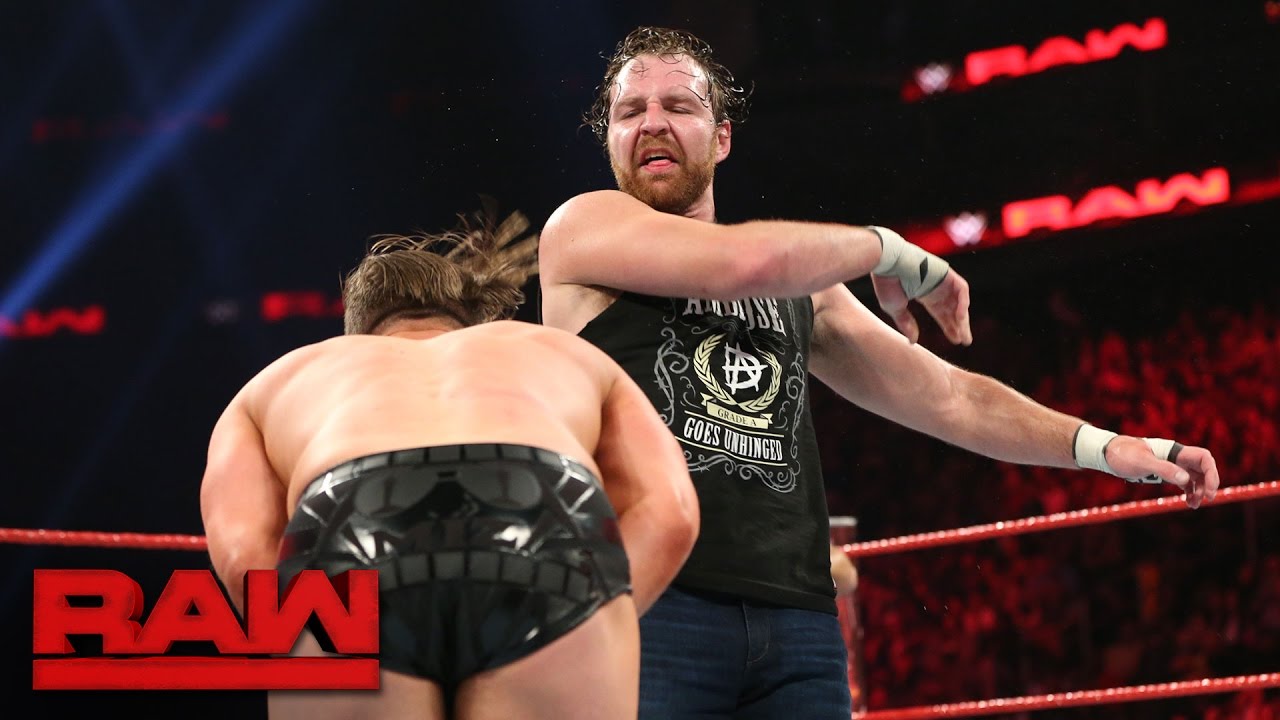 I think I’m ready for Dean Ambrose to not hold a title in WWE for a while. He held the WWE Championship for a while, then went almost directly into this title reign and I think it’s time to have him step back for a bit to keep him fresh. I thought putting him on Raw would do that, but it hasn’t. I don’t blame WWE, Ambrose is their Iron Man and he can put on a good match with just about anyone because of his brawling style. I just think that The Miz could take this title in a different direction and have some better feuds than Ambrose can have at this point.

I was impressed with the match between these two guys. Miz avoided a lariat to hit the Skull Crushing Finale and I thought it was over only for Ambrose to kick out at the last moment. The finish didn’t match the effort in the match as The Miz got his low blow blocked and Ambrose kicked him below the belt for the DQ. Miz wins, Ambrose retains the title. I hate these garbage finishes, but I understand. It’s a lot more lucrative for the title to change hands at an event like Extreme Rules than Raw. Here’s hoping The Miz can take the title then assuming he gets a rematch.

Alexa Bliss called Newark the sweat glands of America and the poster children of failure. She said that they’re going to experience a winner tonight and pumped herself up calling herself the one and only goddess. She talks about winning being easy when you’re smarter and more dominant than anyone else. Bayley would interrupt to say that she will invoke her rematch clause at Extreme Rules. Alexa runs down Bayley and tells her she will never get extreme and to leave the championships to the adults.

Bayley then attacked Alexa, but Alexa would get the upper-hand and ended up hitting Bayley with a Kendo Stick. Now, this is different! I’d love to see what these two women can do with weapons involve. Their feud is becoming a lot more personal than it was before and bringing weapons into the fray can change things up a bit. I can’t wait for this one. 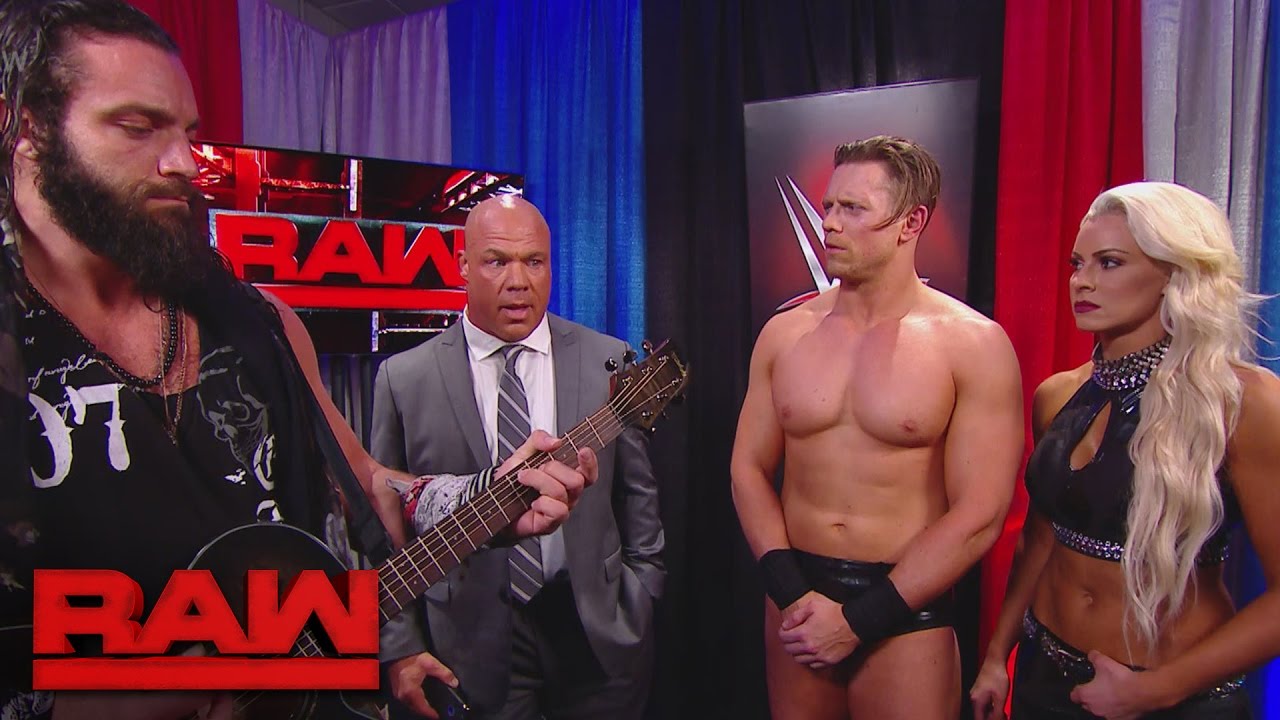 The Miz demanded a rematch from Angle backstage who gave it to him due to the win. Miz then wanted him to make it so the title can change hands on a DQ which Angle also did. This all but ensures that Miz is taking the title at Extreme Rules. Elias Samson would come up and play his guitar, then walk away again. I hope they have Samson do this for 3 months. It’s so simple, but the payoff will be bigger the longer they wait to acknowledge it. 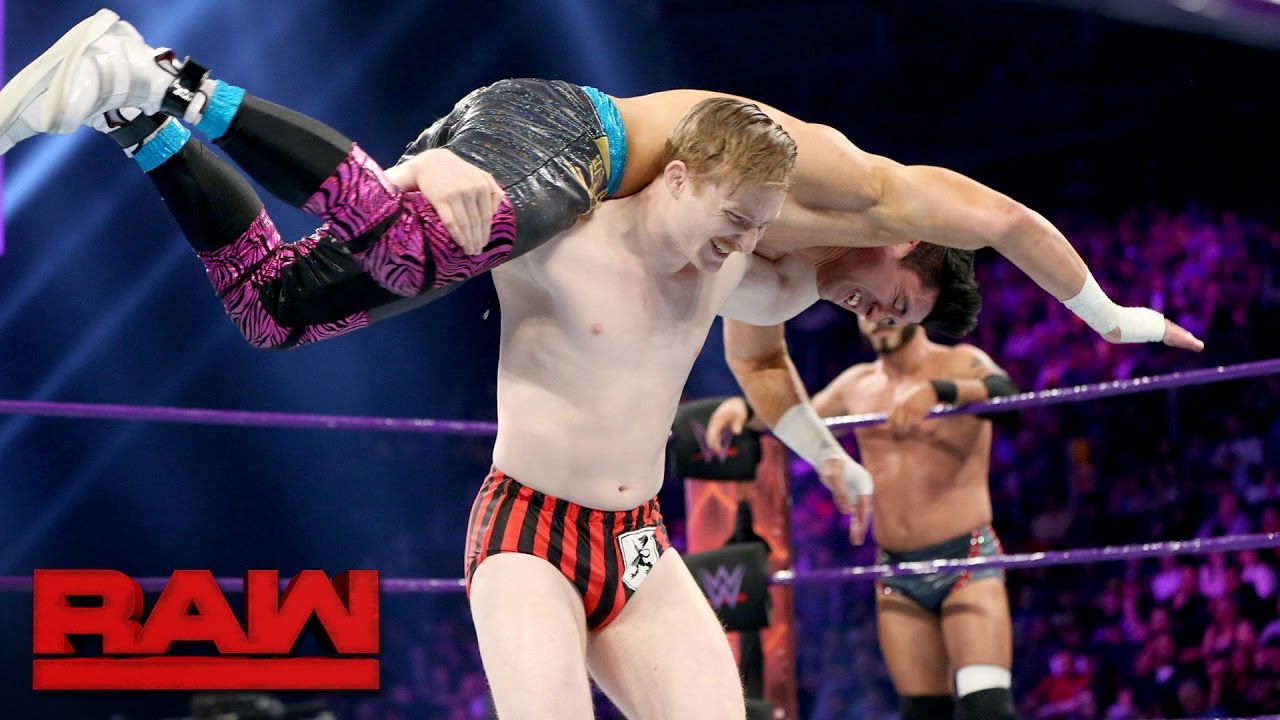 Aries and Gallagher had a hot start until the heel team starting taking over. Neville would distract the referee for TJP to attack Gallagher on the outside in the middle of the match. I thought Neville and TJP made for a pretty cohesive unit. Time to bring in some Cruiserweight tag titles! Ok, maybe not, but would it be the worst idea? 205 Live definitely has enough talent to support it. Most of those guys aren’t doing much anyways.

TJP got the win for his team after hitting a Detonation Kick. This was enabled as Neville held Gallagher’s foot back. I don’t have much to say about this one. We’re just spinning tires until we get to Extreme Rules. Austin Aries was announced to face Neville for the WWE Cruiserweight Championship at that event before the match.

Bayley Ready to Get Extreme 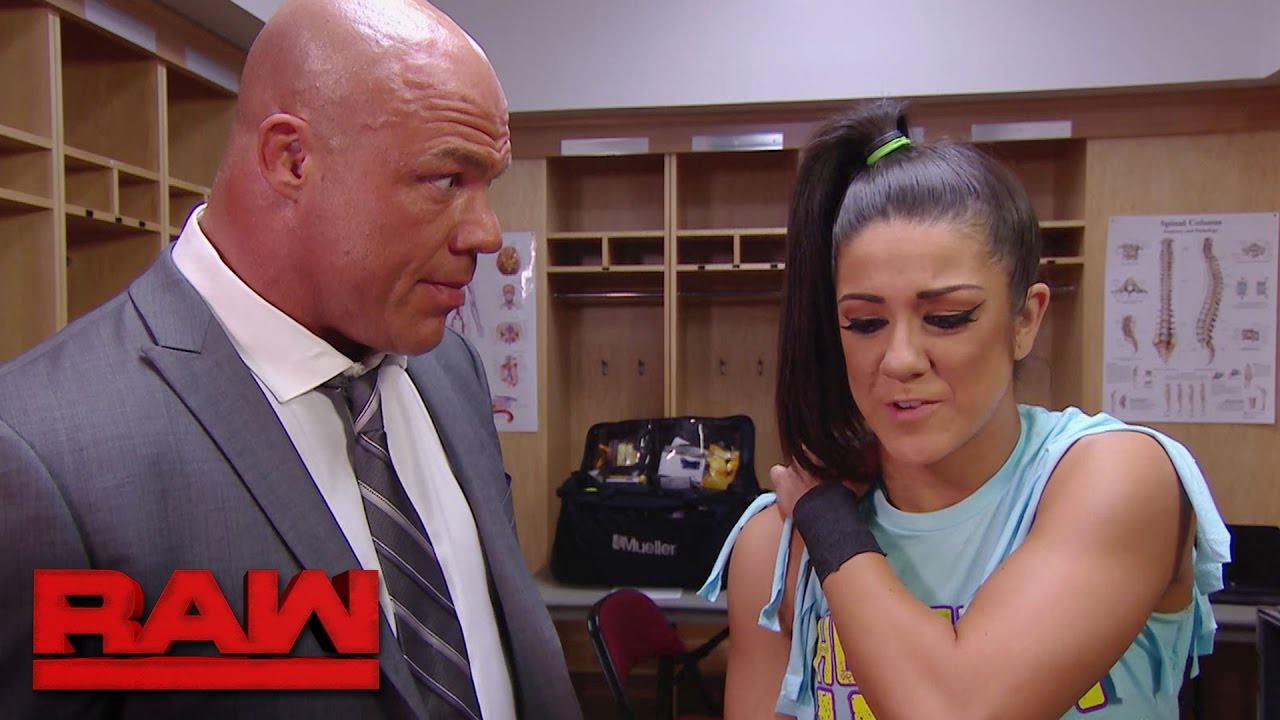 Kurt Angle told Bayley that she would have her rematch in a straight up wrestling match. Bayley said that wasn’t fair because she wouldn’t get a chance to get her back. Kurt makes the match a Kendo Stick on a Pole Match. Seriously? Can’t we make it an Extreme Rules Match? This dissolves all the excitement I had for this match. Anything on a pole is a bad idea, this much I know. These ladies could have used weapons effectively, now they won’t get much of a chance.

R-Truth is backstage with Goldust and told him he was sorry for last week because he knows how much the titles mean to Goldie. Goldust says they’re a team and they dig and crawl their way back up starting against Gallows and Anderson, Could we be seeing a Cinderella story starting tonight? Is this Goldust’s last big run? From the sounds of it, that’s how I’m feeling. I think I could get behind that if it’s done correctly, but I’d rather Goldust turn on R-Truth. 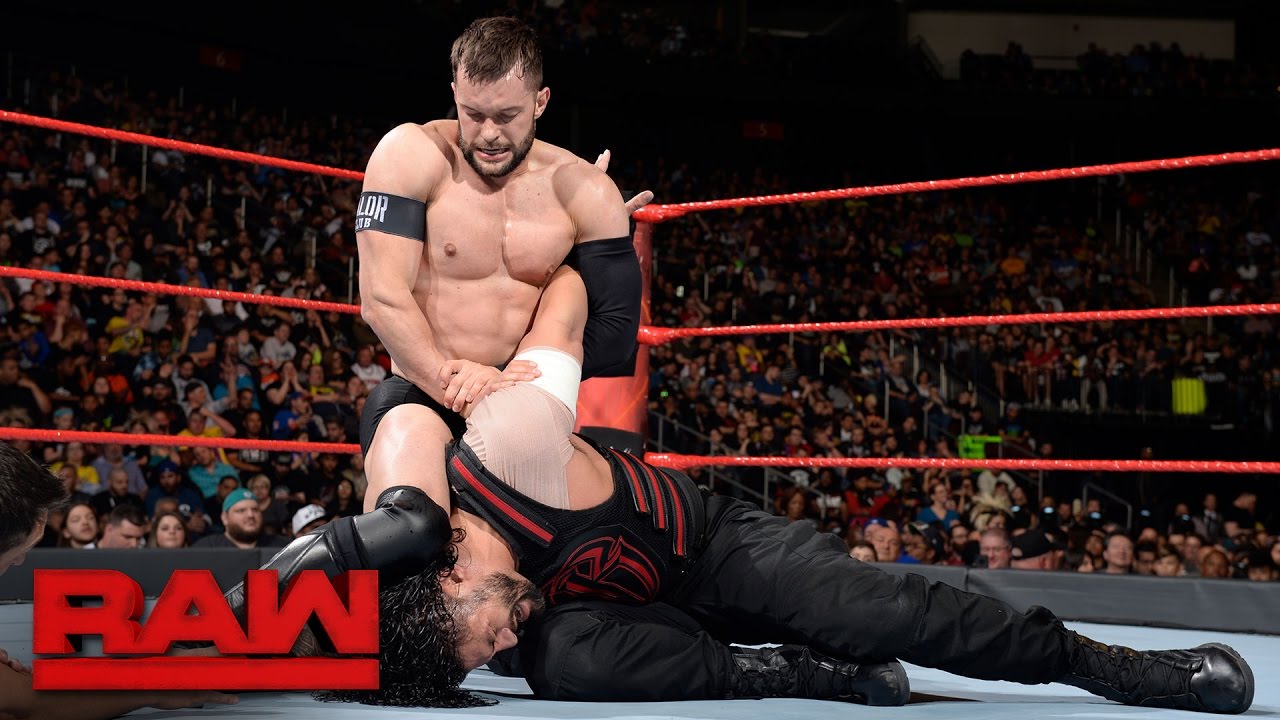 I like these types of matches on Raw. We don’t see these two guys fight every day and they have such contrasting styles. I want more of these unique matchups. I’ll hand it to Roman Reigns too, he’s been so good. Not many people give him the credit that he deserves. He seems to be able to fight anyone and make it believable that they can beat him. I mean, Balor doesn’t exactly look like he stands a chance against Roman.

Finn has been equally as good as Roman lately. Everything he does looks so polished and meticulous. Balor kicked out of a Superman Punch which I can’t say I’ve seen very often (except for Strowman). The end sequence was pretty darn good too with Reigns knocking Balor off the top and hitting a Spear. I really enjoyed this one. I didn’t expect it to be as good as it was, but for a TV match, it was great.

Bray Wyatt alludes to Brock Lesnar being an evil lurking in the shadows. He says it’s his world and that he will take the spear of fate and deliver it into the heart of the beast. He says he will stand triumphant as Universal Champion. The for good measure he wonders if Seth can stare evil right in the eye or submit to his gutless instincts. Typical cryptic Bray promo. Rollins responds and takes offense to the gutless statement and says his actions speak for themselves. I guess a little backdrop for this match was needed, but these promos were pretty generic. 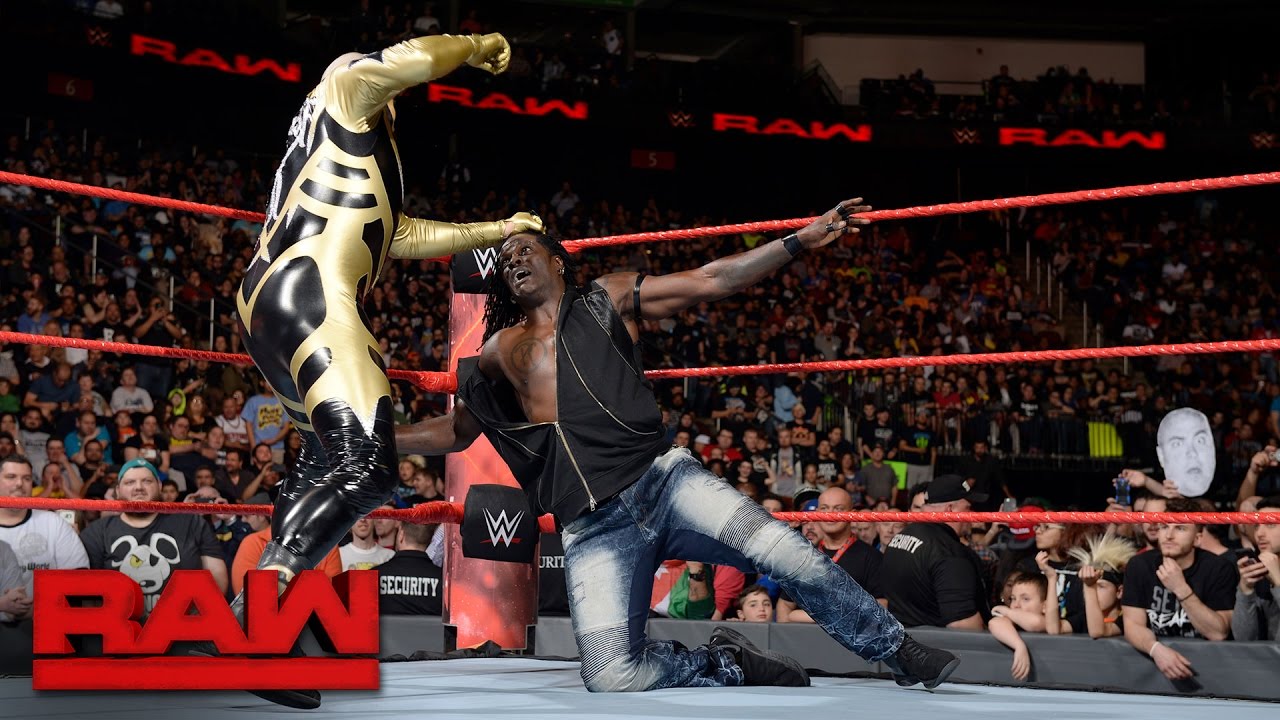 The Golden Truth came out for their match against Gallows and Anderson and did their usual routine. Goldust then cuts it short by beating the crap out of R-Truth. This is something that has been brewing for a long time and this was the right time to pull the trigger. Goldust hasn’t been a heel in a long time and if they can pull something tangible out of this, I think it’ll be much better than their tag team was ever going to be. He ended it by saying, “That’s what’s up” to R-Truth. 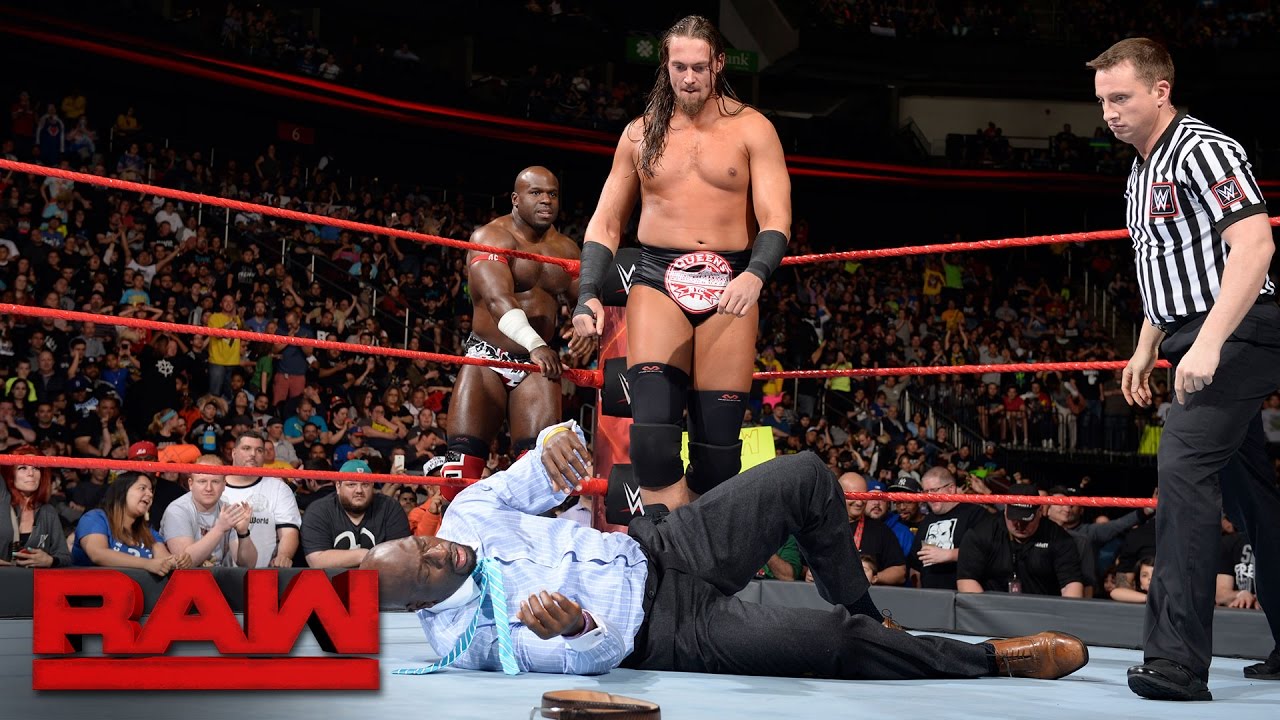 Enzo and Cass did their usual routine but were interrupted by Titus O’Neil who did his own impression of their entrance. Apollo Crews looked pretty embarrassed by Titus. Cass beat Titus (who was in a business suit) with a Big Boot for the 3-count. Enzo tried to take a selfie after the match with Crews in the background and Crews kicked him in the face for his trouble. It looks like the partnership between Titus and Crews is getting stronger each week, I just don’t know the endgame here. 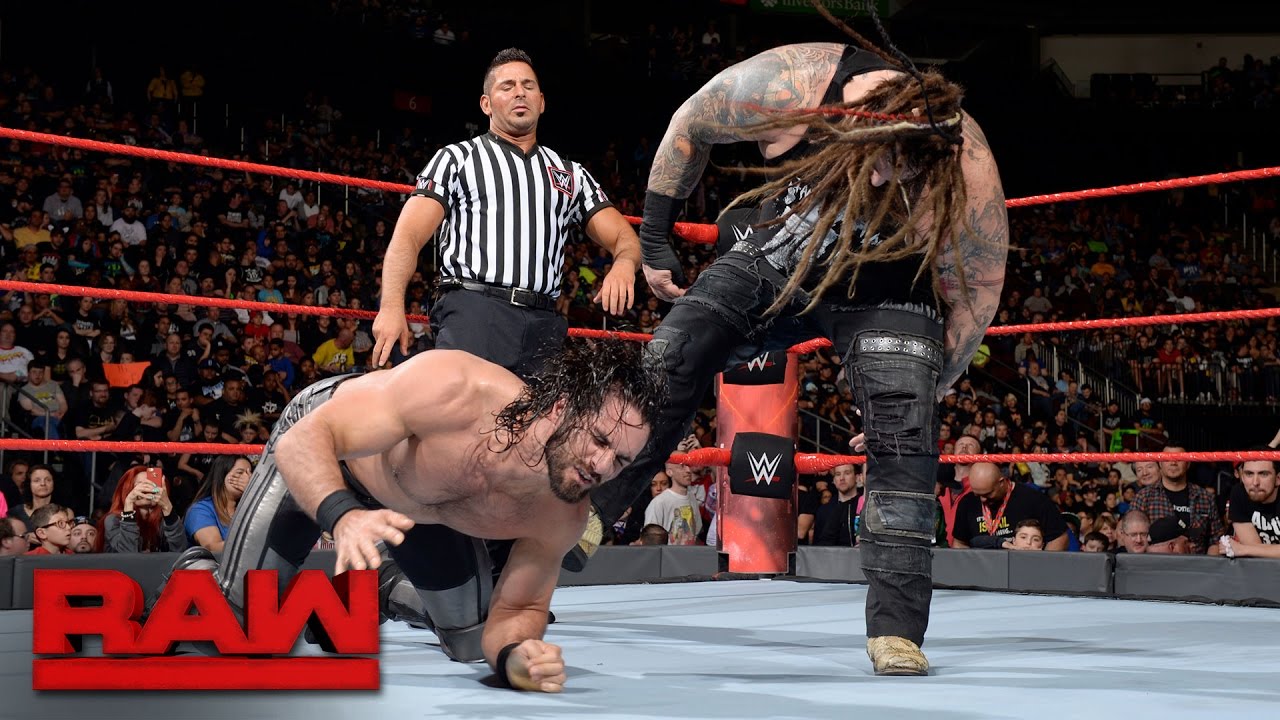 I’d like to say that we had another well-contested match on Raw, but yet again, interference ends the match prematurely. Samoa Joe ended up attacking Rollins out of the crowd. Wyatt then planted Joe and Rollins with Sister Abigail to end the show. Bray is looking stronger than ever right now and part of me wonders if maybe he will go on to face Lesnar. It could be an interesting matchup with the mind games that Bray could battle Lesnar’s power with. He just seems to be the focal point each week and there has to be a reason why.

I’m pretty harsh on Raw most weeks because I feel like it should be far and away the best show with it being the only one at 3 hours. This week’s show was actually pretty good. I feel like we saw some good matches, some good plot twists, and that everything seemed laser-focused. Just as I thought, it took a few weeks after the shake-up, but Raw is hitting its stride again.