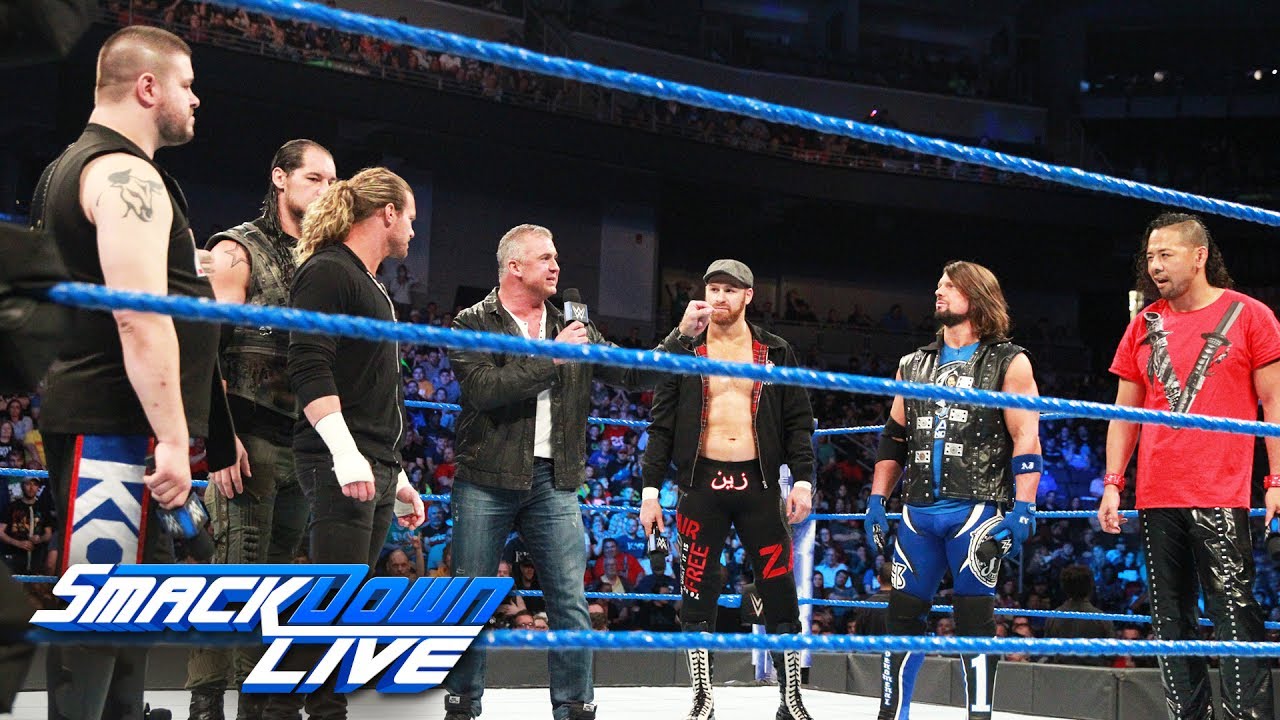 Shane McMahon came out with a bit of swagger to start SmackDown Live (after we saw new WWE champion, Jinder Mahal, arrive by limousine). He came out to announce the participants in the Money in the Bank Ladder Match at the next PPV of the same name. Shane announced Dolph Ziggler, Baron Corbin, Shinsuke Nakamura, Sami Zayn, and AJ Styles as the 5 participants.

Kevin Owens came out to protest this decision because he isn’t in the match and AJ (who lost at Backlash) is. He talked about Shane being upset at the fact that he did what Shane couldn’t by beating Styles. I love the way Owens can always twist the knife with every little thing that he says. Shane ends up putting Owens in the match without any issue. I thought it was kind of strange that he just gave in like that, but then again, Owens kind of does deserve to be there if we’re going by wins.

Everyone went back and forth about why they were going to win and then Shane took it upon himself to makes some matches on SmackDown Live. He made Zayn vs. Corbin in a Backlash rematch and Owens/Ziggler vs. Styles/Nakamura in a tag team match for later in the evening. Now those are some matches I can get behind! 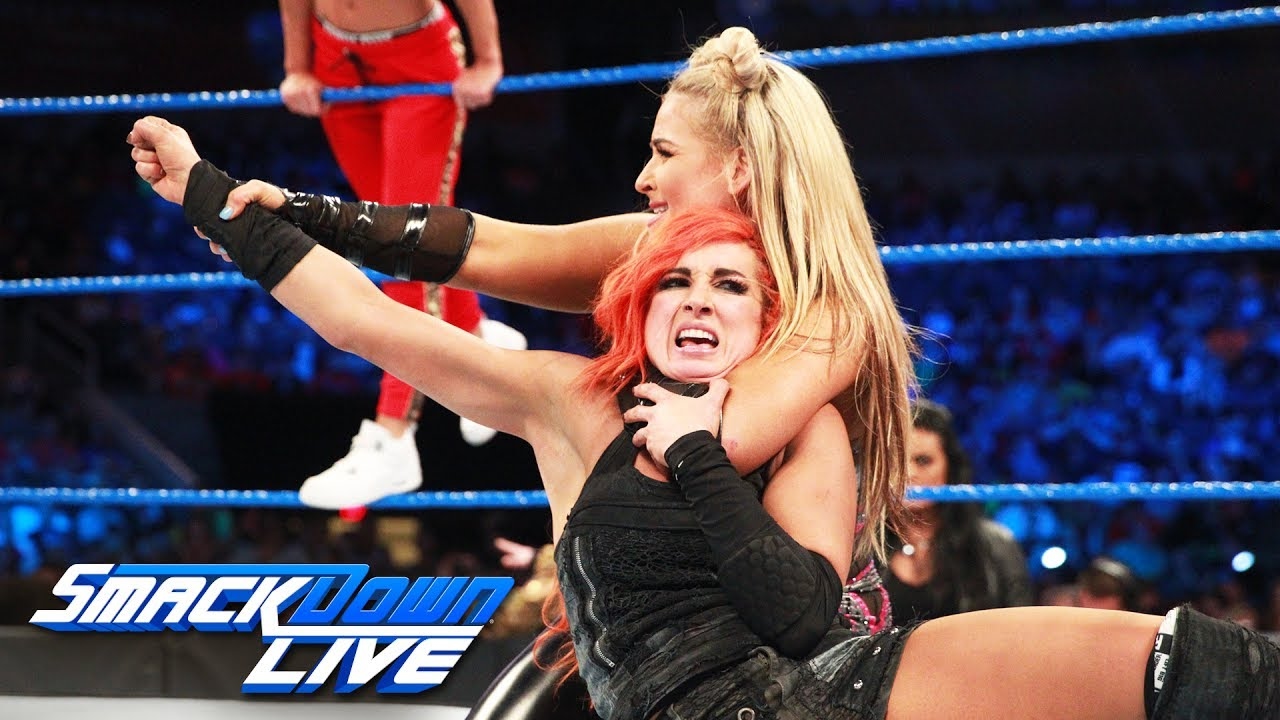 It really surprises me that Carmellhttps://www.youtube.com/watch?v=HAt6XSlDNNUa hasn’t been given more of an opportunity on SmackDown Live. She started off so hot and since being saddled with Ellsworth, she hasn’t been nearly as prominent. She’s been a side act at best. She and Natalya did a good job of cutting down the ring and isolating Becky in this match. This was another match that saw a lot of distractions by Ellsworth and Tamina, but it didn’t matter. Becky Lynch made Carmella tap to the DisArmHer.

This was a good little match for what it was. I wish it was longer, but it is what it is. It lasted somewhere between 5-8 minutes. I thought it was strange for this to be the women’s segment for the week. I expected something with a bit more story development. 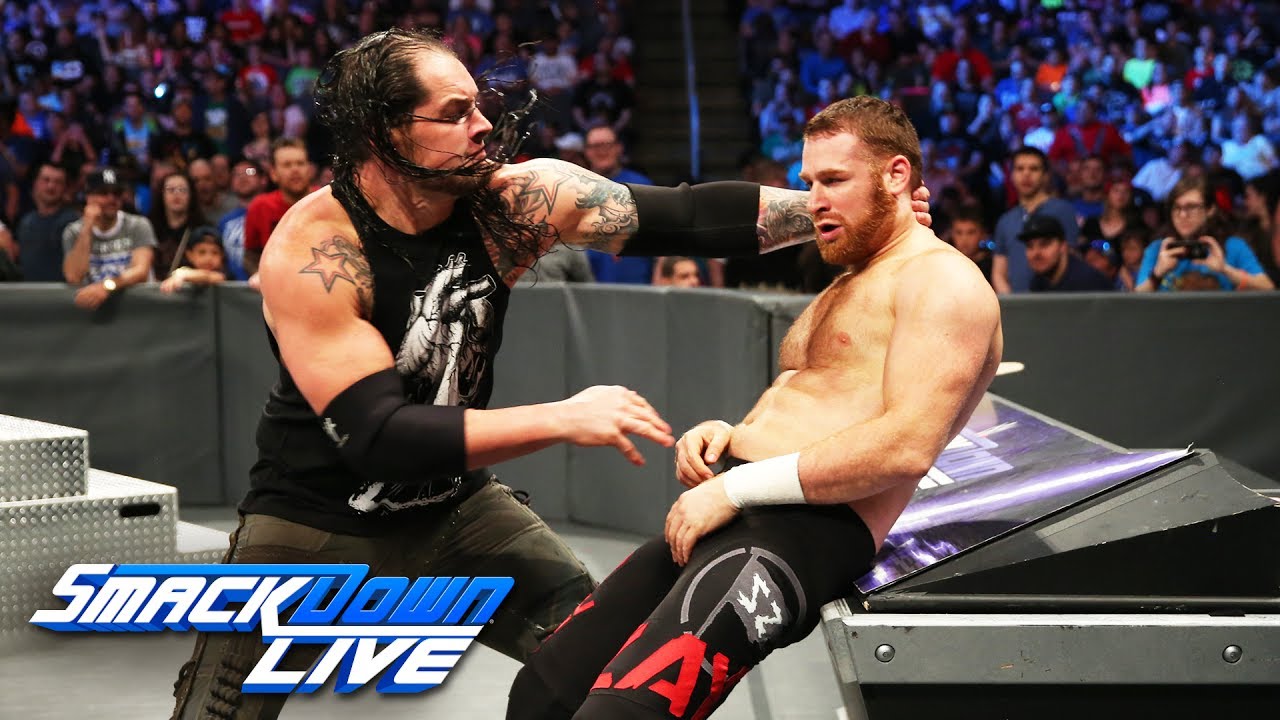 Baron Corbin started beating Sami Zayn down after the match knocking him into the timekeeper’s area and hitting him with a chair. He then dropped Sami’s neck on the railing and started smashing his head with forearms against the railing. Sami gets stretchered out. I wonder if this will lead to a Cinderella story for Zayn returning from injury at MITB to grab the briefcase. It’ll more than likely be that he’s gets replaced with Rusev instead. I like this out of control side of Corbin and this is the type of stuff that is going to get him hated even more. That’s a great thing.

AJ Styles welcomed Shinsuke Nakamura to SmackDown Live backstage talking about how he learned a bit from Shinsuke. He told Shinsuke to follow his lead tonight because this is the House That AJ Styles Built. Nakamura says that tonight they may be a team, but at MITB he’s going to grab the briefcase and make AJ’s house his playground. It’s nice to see Nakamura getting in on these backstage segments. He always seems to pull out a good one-liner.

Breezango is backstage with Shane McMahon and they’re turning in their badges because they lost on Sunday. Shane says they’re not real cops, but they do belong here. He gives them both matches with Jey and Jimmy Uso for later on. They grab their stuff and get ready saying they’re back on the case. Well, it’s great that Breezango aren’t being forgotten after that loss. I like that they’re getting more opportunities. Fandango and Tyler Breeze are too talented to be relegated to comedy acts.

Jinder’s celebration consists of some Indian dancers and drummers as well as some colourful graphics and a decorated ring. He got a ton of boos which is surprising considering how many people stood and cheered at Backlash. Jinder addressed this and said their boos don’t matter because 1.3 billion people are celebrating right now. He addressed the racial prejudice from the crowd and said he proved everyone wrong and enlightened all the fools. He calls himself the greatest WWE Champion of all time. He says he’s celebrating for India and then speaks punjabi before fireworks go off.

I’m glad they made this a big moment for Jinder. He certainly worked for years to get to this point and heel or not, this is his time. I’m interested to see how long he actually holds the title. I definitely think we could see someone win MITB and cash in right away to beat Mahal for the title. Either way, no one can take this away from Jinder now and I’m happy that WWE did something completely outside of what they would normally do. 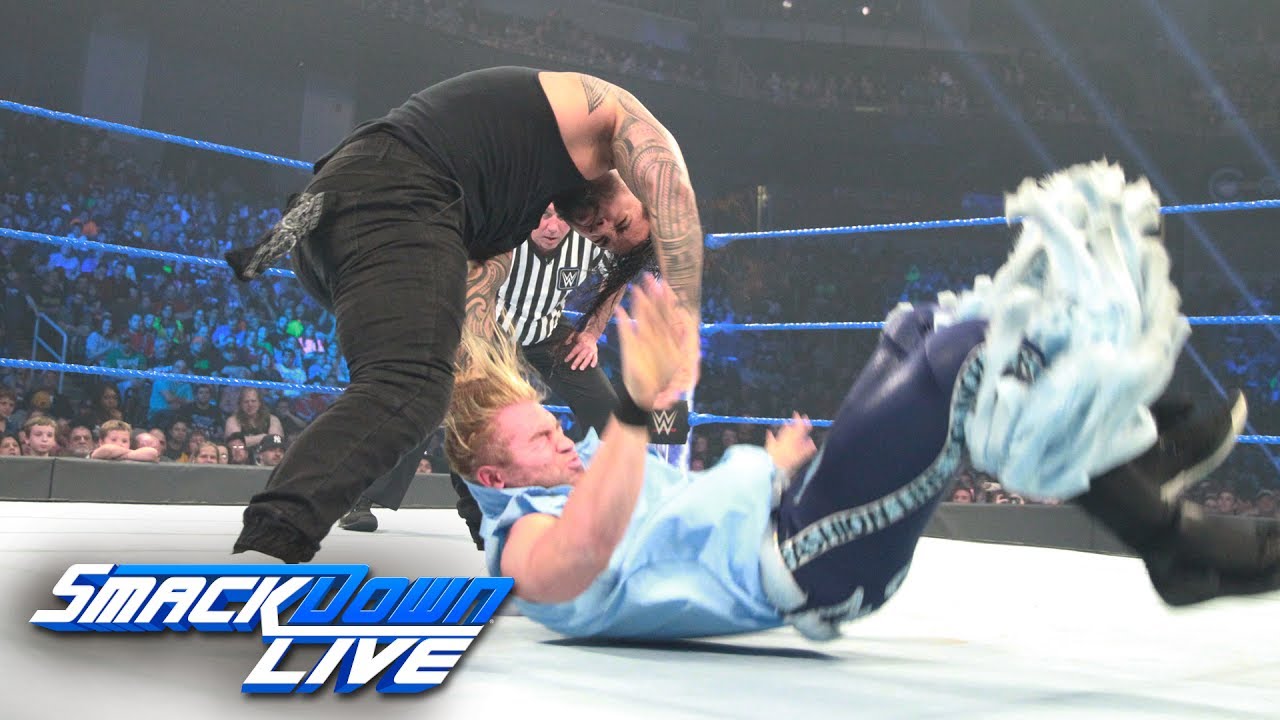 Tyler Breeze brought their box of stuff to ringside which included all of his disguises from Backlash. Breeze gets the win with a rollup after Fandango distracted Jey with a squirt gun. Completely ridiculous, but I found it hilarious.

Breeze put on the wig and showed handcuffs to Jey and he ended up being chased. Fandango ends up rolling up Jimmy for the 3-count as well.

After the match, they try to get The Usos to accept a championship match and they do immediately. 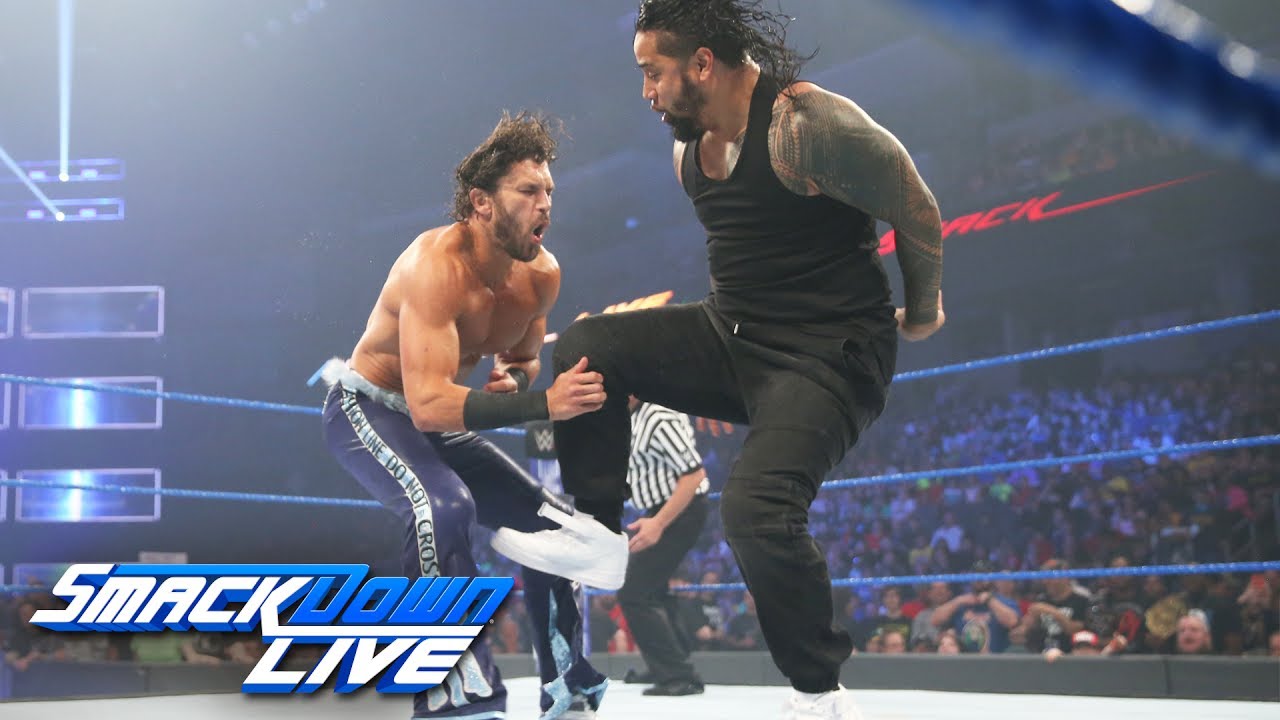 Just like that, we have ourselves a title match on SmackDown Live. Now that’s the kind of stuff that keeps a show interesting. I liked that Breezango had to earn it (even if they did quite easily). Fandango had it won in the early going when he took out both Usos, but couldn’t get the 3. Shortly after that, it was The Usos that had their own close call, but Fandango reversed a splash into a rollup and still couldn’t get the 3. The Usos won off a blind tag after Fandango hit a leg drop and he got hit with a splash by the legal man and stayed down for the count.

For a quick match, it was full of action and I really enjoyed it. I think this probably puts the title hunt to rest for Breezango for now. It was still a good little run and they proved they could entertain the crowd for longer than a few minutes over the last month.

The 5 women who aren’t the SmackDown Live Women’s Champion came in to plead their case for the title. Shane decided to make a Fatal 5 Way Match next week on SmackDown Live to determine the #1 Contender to the championship. I think this will end up morphing into a Women’s MITB. Unless that’s just wishful thinking. I really hope that’s not the case. 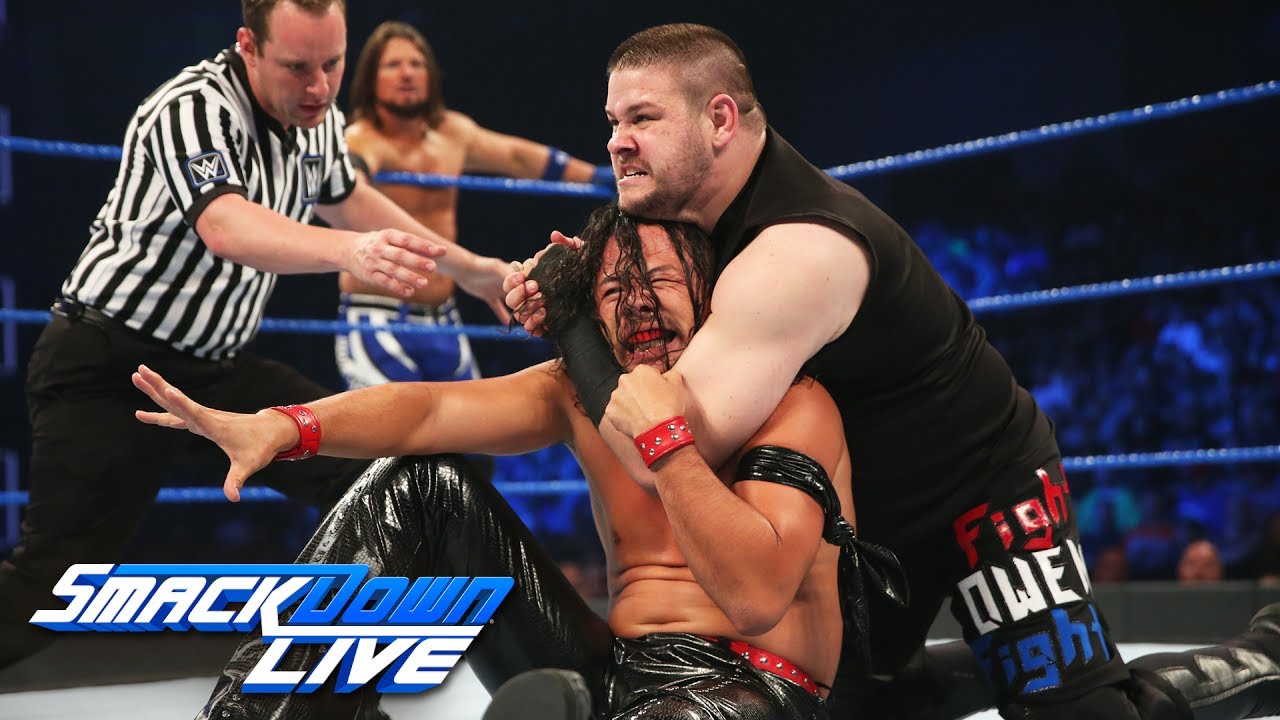 It’s already time for the main event. This show seems to have flown by. It amazes me how fast SmackDown goes by compared to Raw. I normally don’t like the main event tag team matches as I said in my Raw article, but how can you go wrong with Nakamura and Styles as a tag team? That’s right, you can’t. This was a good main event, it was everything you’d expect a match between these four guys to be and I thought it capped off a great episode of SmackDown Live.

The end came when Styles hit a Pele Kick on Owens and Nakamura hit a dropkick and Kinshasa on Ziggler for the 3-count.

The cool thing was that SmackDown ended with Nakamura and Styles facing off in the middle of the ring? A sign of things to come perhaps? I think that we’ll see that feud at some point within the next year. It’s a big money match that everyone in WWE is ready to see. I think it could even work with both guys as faces. Regardless, I enjoyed this episode of SmackDown a lot, it was miles ahead of what Raw put forth this week.