In the 5/9/2017 SmackDown Live Recap and Analysis, we’ll talk about the lengthy intro segments to SmackDown, Ziggler/Nakamura, and much more! 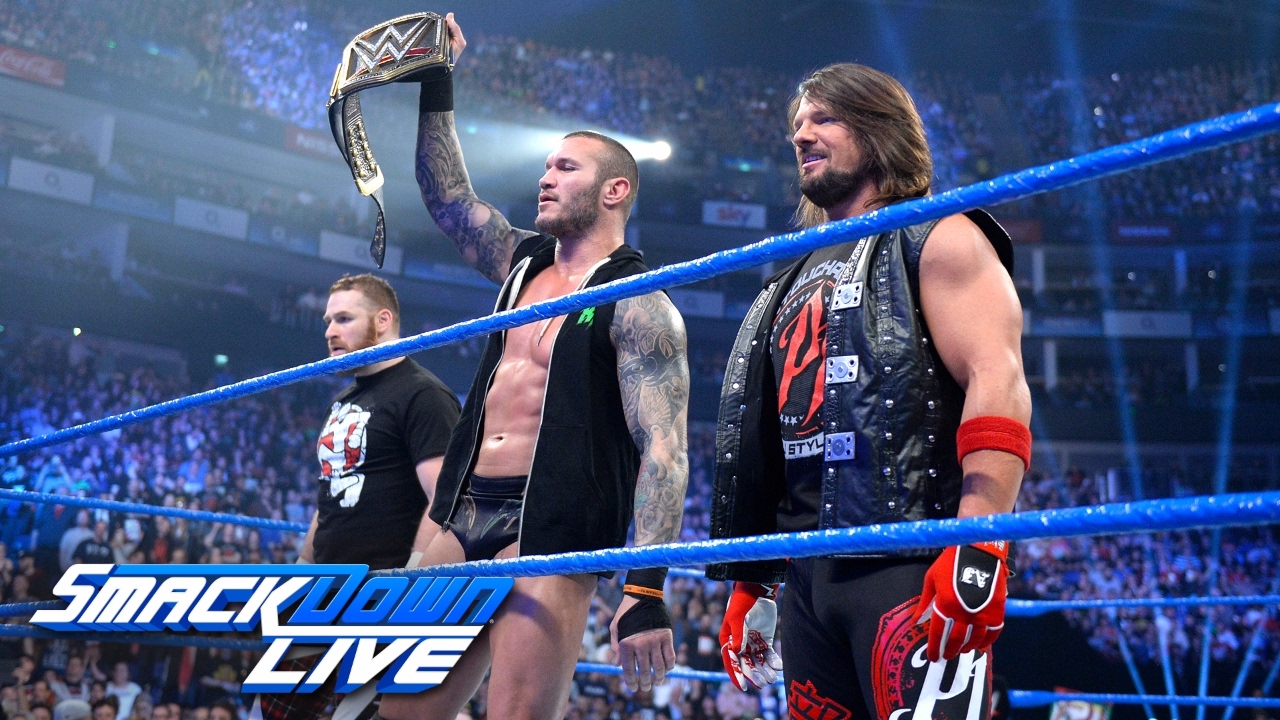 I feel like we have a similar in-ring segment each week. In reality, this hasn’t really changed since the Attitude Era, I just wasn’t interested this week. Randy Orton came out to address Jinder Mahal costing him the House of Horrors Match at Payback. This would bring Jinder Mahal out to talk about how certain he is that he’ll become champion. He even has the promotional photos all done for it. That was strange to me, I don’t remember another non-champion having pictures like that taken. That’s the point, I suppose. If it irks me, he’s done his job. He then went on to say he would “cleanse your ignorance with my greatness”. It was a peculiar way of wording things, but I felt like it drove home the point that he’ll stop at nothing to prove everyone wrong.

Kevin Owens came out next and knocked Jinder, Randy, and England all in one fell swoop. He went on to talk about how, once he beats AJ Styles at Backlash, that he’ll be coming after the WWE Championship. He said he didn’t want to just be the face of America, he wants to be the face of WWE. He repeated this and then repeated it again in French which drew the ire of the crowd. Owens gets better and better each week. This is a guy that could be a heel his whole career and it no one would get tired of it.

AJ Styles is out next to talk about SmackDown being the house that he built among other things. He talked about Owens bragging about what he did to Jericho, but said Jericho is not AJ Styles. Baron Corbin then comes out off of his suspension and is cut off by Sami Zayn who attacks him out of nowhere. The face team gets the upper-hand and we have a 6-man tag for the main event this evening. Yep, that’s all we’re getting out of that. I’d much rather not waste 10-15 minutes of an already short show with these segments. I’d much rather quick promos and more matches. 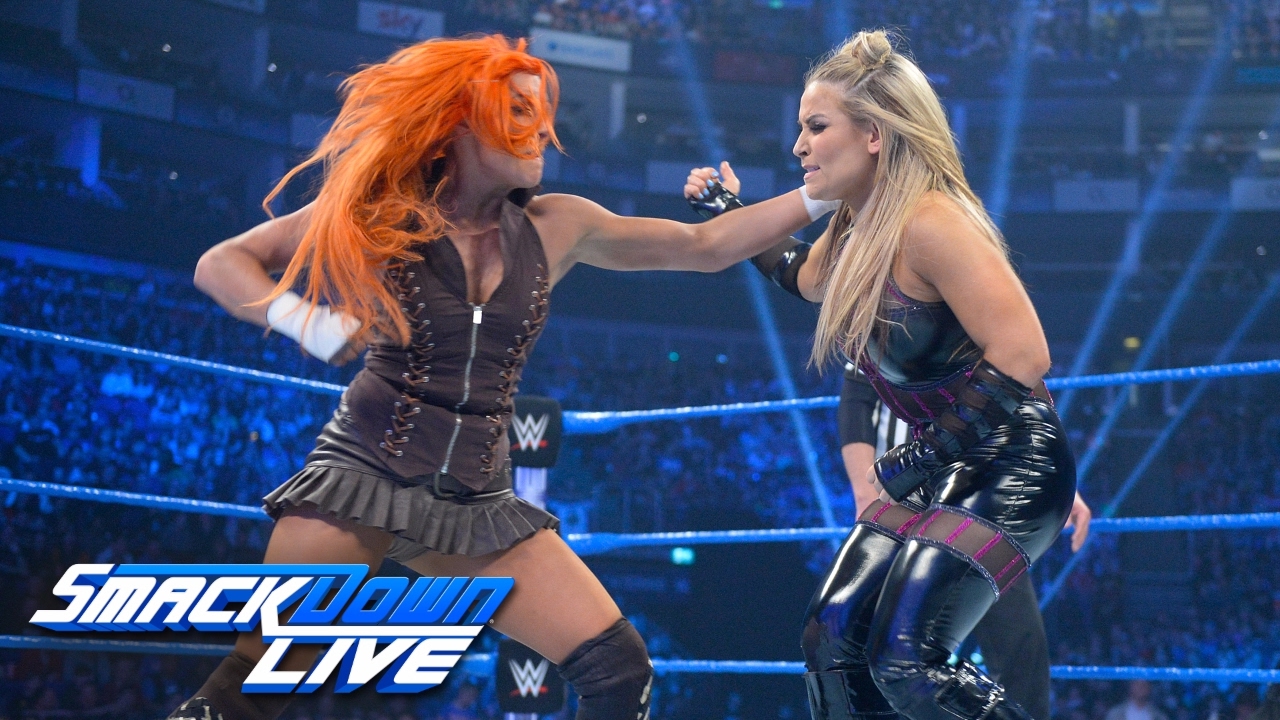 I like this storyline between the heel and face women on SmackDown. The SmackDown creative team recognized that they didn’t have time to feature all the women on the show unless they were in the same story so they made that happen. Natalya ended up getting the victory after a distraction by Tamina. Naomi tried to stop the distraction, but Charlotte ended up pulling her away (still not sure why; to save from a DQ possibly?) leading to the loss.

Backstage after the match, Naomi and Charlotte started to argue before Becky took it upon herself to unite the group. The three women decided to form a bond. I found it funny that Charlotte was still acting like a full-blown heel before this moment and then seemed to completely flip. This feud is going to be a good one and I can see it going on for quite a while. There’s a lot of ways to keep it fresh considering the group can trade the title back and forth between different members. 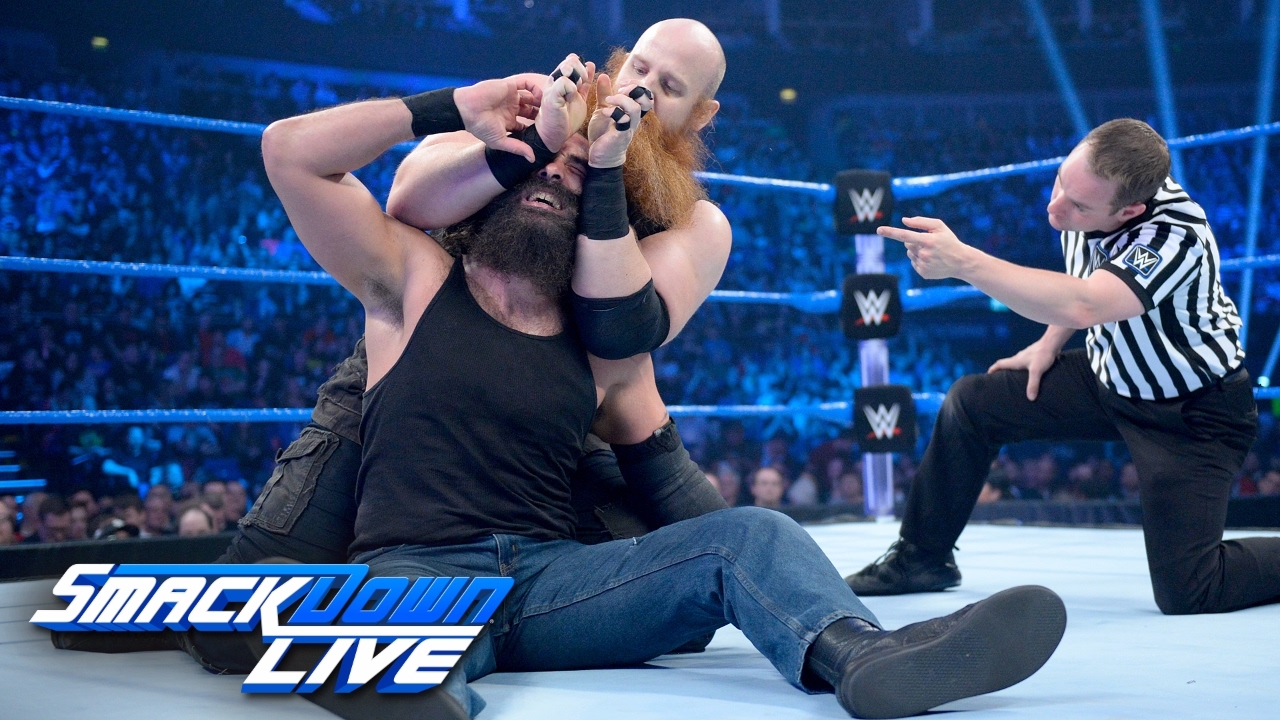 You can tell that WWE really has no clue on what to do with Luke Harper and Erick Rowan. These two faced off on SmackDown for little to no reason. I think one of these guys should have been shipped out to Raw in the shake-up because they will never have an identity without being away from each other. Harper was starting to find his own way and then Rowan came back and suddenly these two have been fighting each other and have been tied together consistently. Both men deserve to have their own singles run, they’re both talented enough. It’s time for them to show that. This is the problem with debuts in a group like The Wyatt Family, though. Sometimes it’s hard to see them any other way. 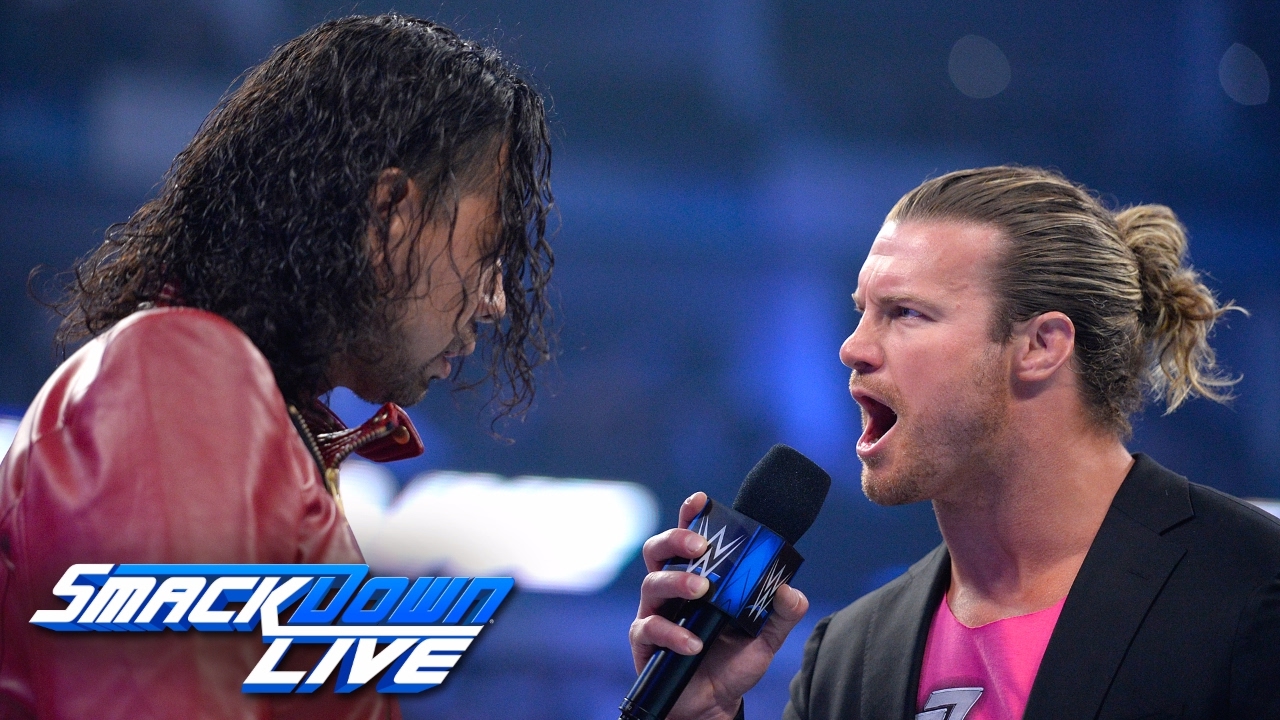 The whole premise of the Ziggler/Nakamura feud is utterly ridiculous. Ziggler is mad because the fans have embraced him before he’s even had his first match on SmackDown while he’s worked for years and they don’t even chant for him. Didn’t he say he didn’t care about what the fans thought after turning heel? That continuity will bite you every time if you’re not careful… Ziggler acted like he wanted a match, but said he’d wait until Backlash. He then got a cheap shot in before Nakamura turned it around to get the upper-hand. Just give us the match already, I don’t need any more talk between these two. There’s nothing more they can really say to make me want to see it any more than I already do.

It’s been said that Sami Zayn is legitimately a very animated person backstage and is very detail-oriented. We’ve been seeing this character come out in an overblown way in the last few weeks. Nowhere was this more apparent than when he was laying out the match with Orton and Styles by going through strengths and weaknesses. Those two ended up walking away before Zayn was even done talking. Watch this segment, it had me laughing. 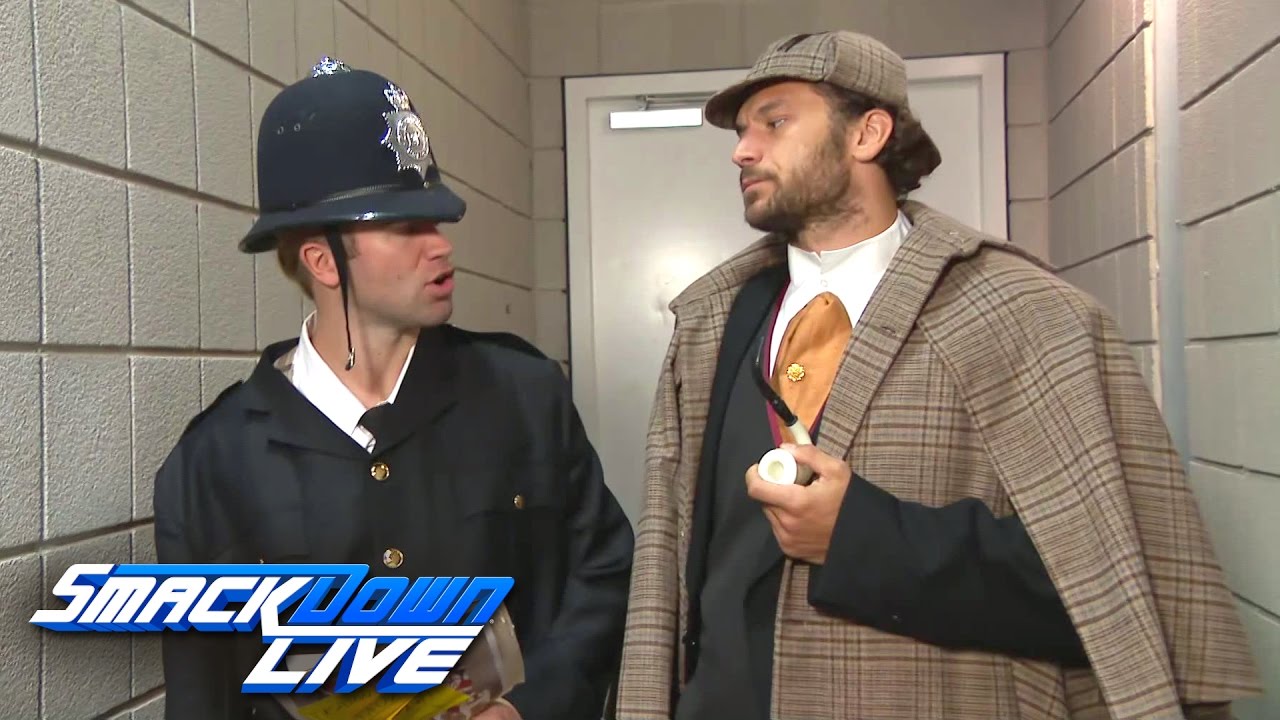 I may be in the minority, but I find these Fashion Files segments entertaining. This one had Breezango finding paint in the hallway and it leading to The Ascension grunting behind a locked door. It was stupid, but there’s a charm to these little skits.

The Ascension vs. Breezango 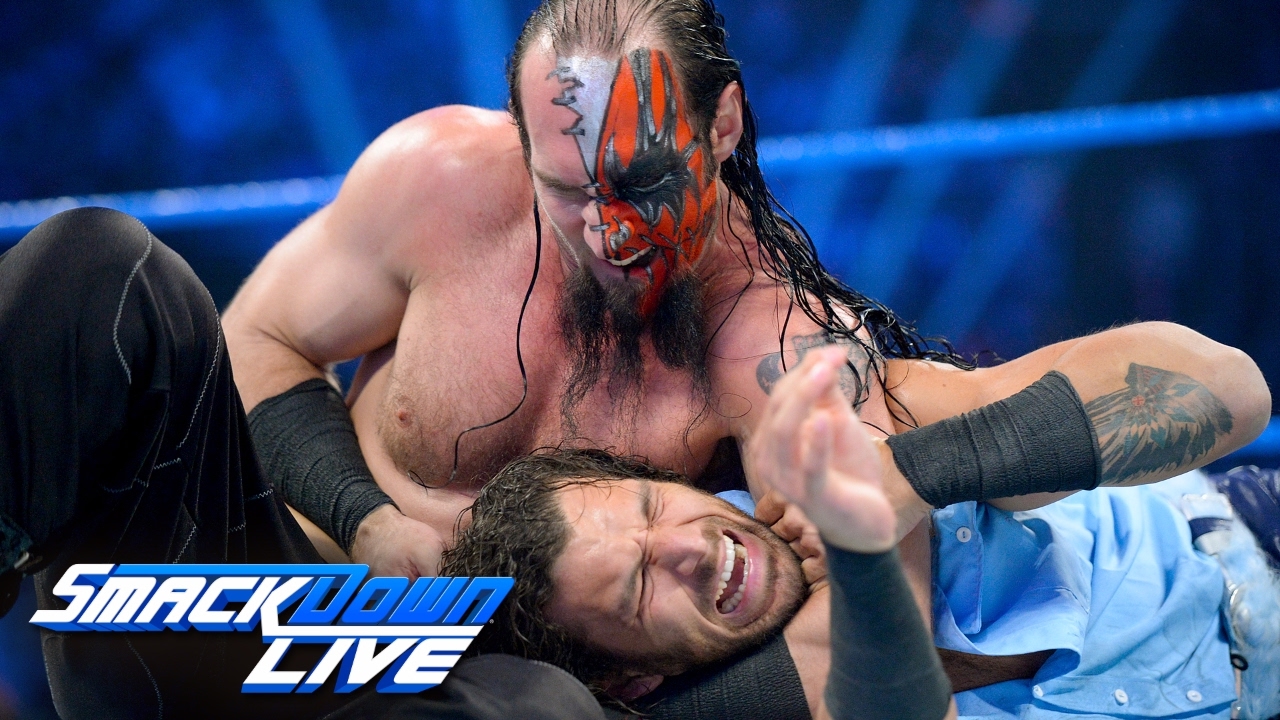 Breezango won a quick match when Fandango hit The Last Dance for the 3-count. Man, The Ascension have fallen so far. I thought SmackDown was the land of opportunity? Certainly not for that team.

The Usos came out after the match and talked about Breezango feeling good about their win. They basically told them to hold onto that feeling because, in 12 days, they’re going to defend the titles. The actually had a really good promo, they’ve been tapping into a different part of their personality and it’s really resonating with me. I like the creepiness and the sinister nature as if they’re always lurking to take out their opponents. They’re miles ahead of where they were as faces. 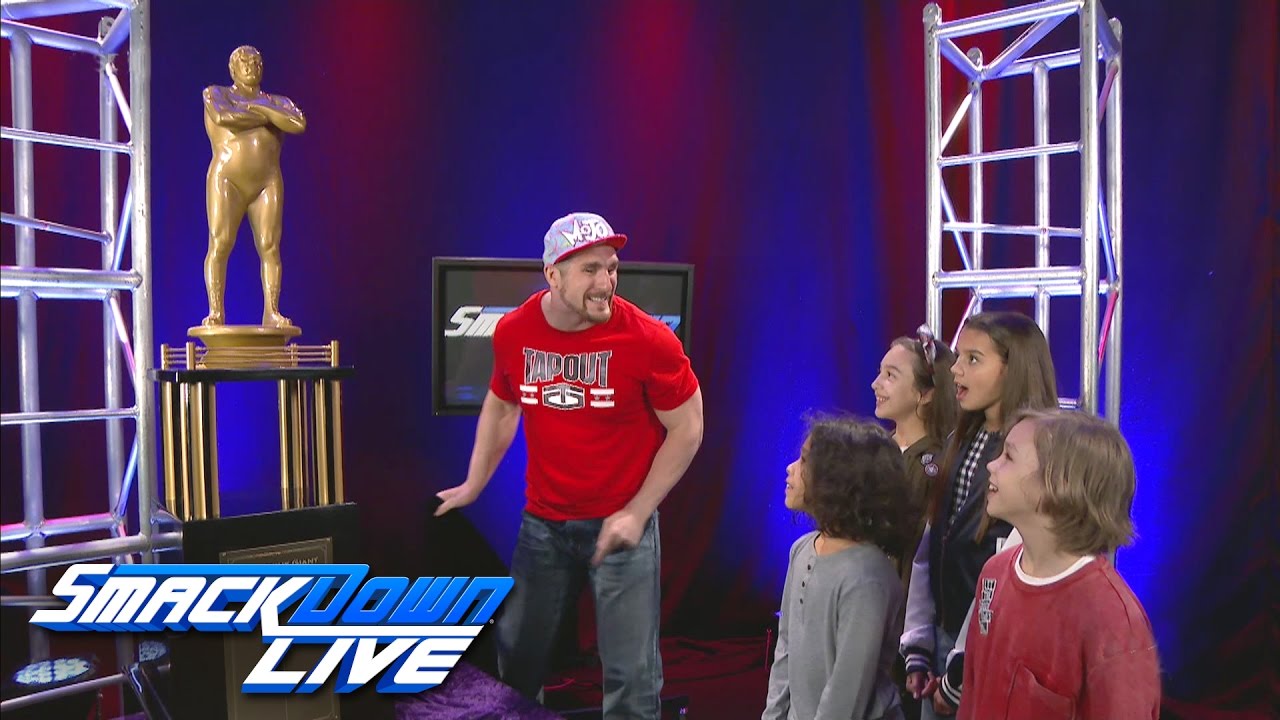 Mojo Rawley was shown backstage talking about how everyone looked down on him and said he was no good as a child. He talked about proving them wrong and taking what was different about him and making it special. He said André The Giant did the same thing. In a comical moment, one of the children kicked him after he pranked him. 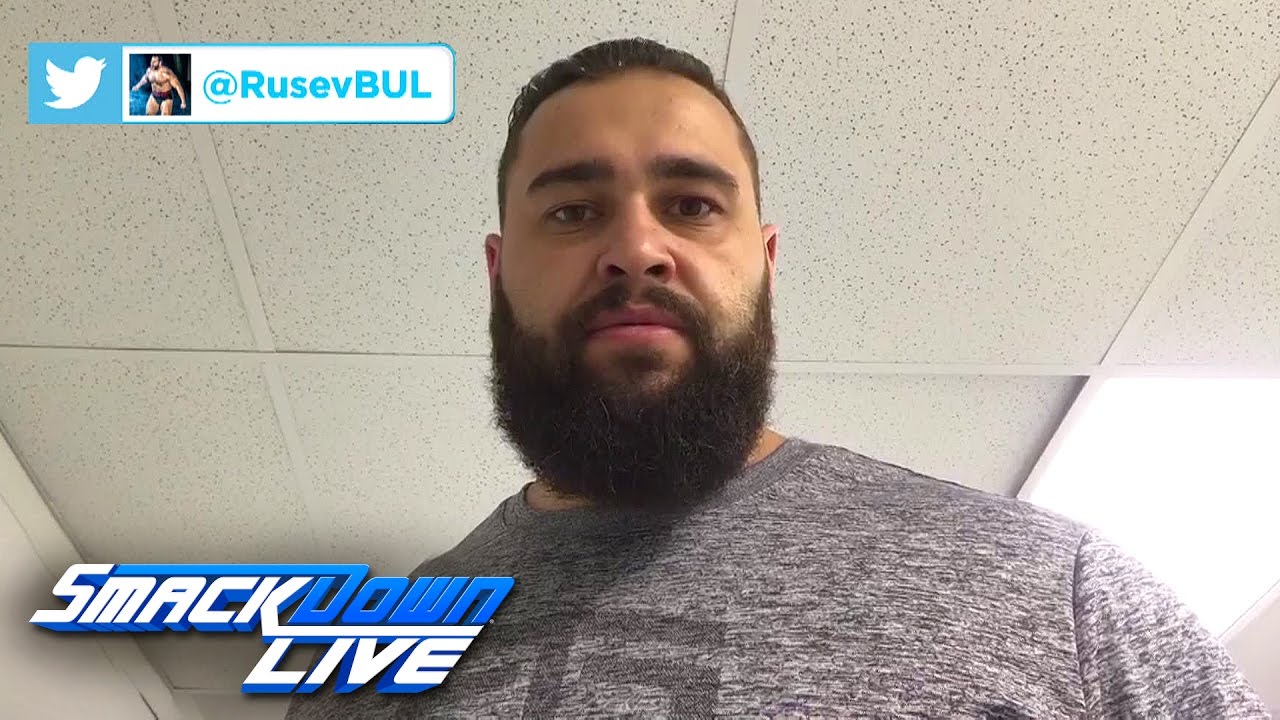 Rusev made a video talking about how he hasn’t heard from Shane pertaining to his WWE title demands. Rusev will be on SmackDown next week to address Shane personally. Interesting to say the least.

What a weird looking tag match! At first glance, it wouldn’t seem like either of these teams have anything in common, but that’s been what’s great about SmackDown. We’re really seeing different things all the time on this brand. Sami Zayn being in the main event was a nice chance as was seeing Jinder Mahal there. So right off the bat, it’s a step in the right direction for me.

The match was a decent main event TV match, everybody got their chance to shine and they gave this match a good 15 to 20 minutes so it wasn’t rushed. The finish was a mash-up of signature moves from anyone and everyone and ended with Jinder hitting a Cobra Clutch Slam on Orton for the pinfall. The Singh Brothers also played a part as they distracting Orton when he went for an RKO. I think this new stable of those three guys is going to be a force to be reckoned with. It would be even better if they could add another mid-card guy to make it four people. I can see Jinder taking the title at Backlash and I think I’d be pretty happy with that. It would be a great story of redemption for someone who was almost the first NXT Champion, was released, came back to be a jobber, and now he’s in the title picture. Hard work pays off.

This was a great episode of SmackDown. They focused on the important stuff, teased the debuts of Lana and The New Day, and didn’t have a lot of filler content. Could it be better? Yes. Was it horrible? Not even close.I would like to see more of American Alpha who suddenly have become secondary to everything else going on. The tag teams, in general, need more than 5 minutes a week. We’ll see if that improves.