WWE Extreme Rules 2017 featured a couple title changes and a brand-new #1 Contender to the WWE Universal Championship that you may not expect! 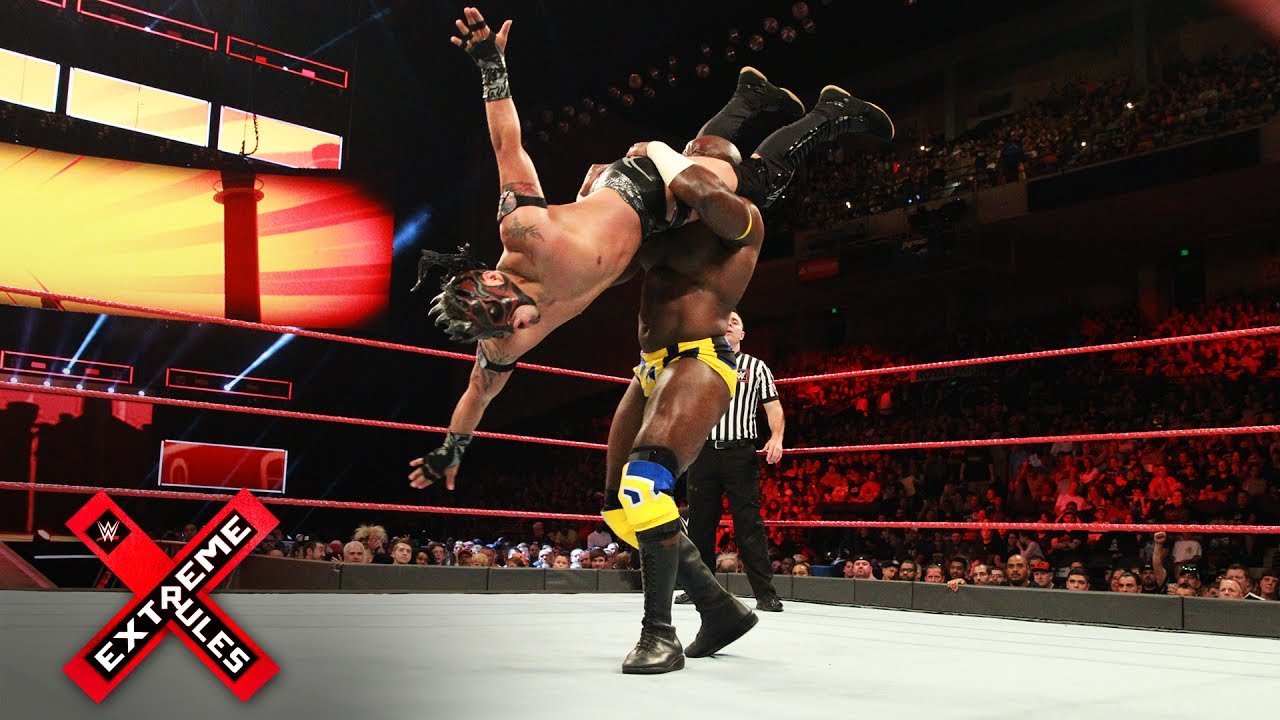 I think this Apollo/Kalisto feud is going to lead to something good for both men. Crews would lose this match after receiving more advice from Titus. Kalisto hit Salida Del Sol by kicking off of Titus on the apron and getting the 3-count. Titus and Apollo would argue after the match. I see this going one of two ways. Either Apollo is going to turn on Titus and come out as a bigger face than before OR he’s going to annihilate Kalisto to prove that he has that extra gear to Titus. I’d much rather see Apollo go full heel than try to push as a face even further. I think he could be a massive heel if he embraces the idea.

I am concerned with what’s going to happen to Kalisto. He’s not really going anywhere. He gets a big win only to be destroyed the next week. I think he has a lot more to offer than just an undercard guy. I think he could easily fill a role similar to Rey Mysterio when he was in WWE. I don’t really see him being a top champion, but I do think he can have a bigger role than he has shown so far. 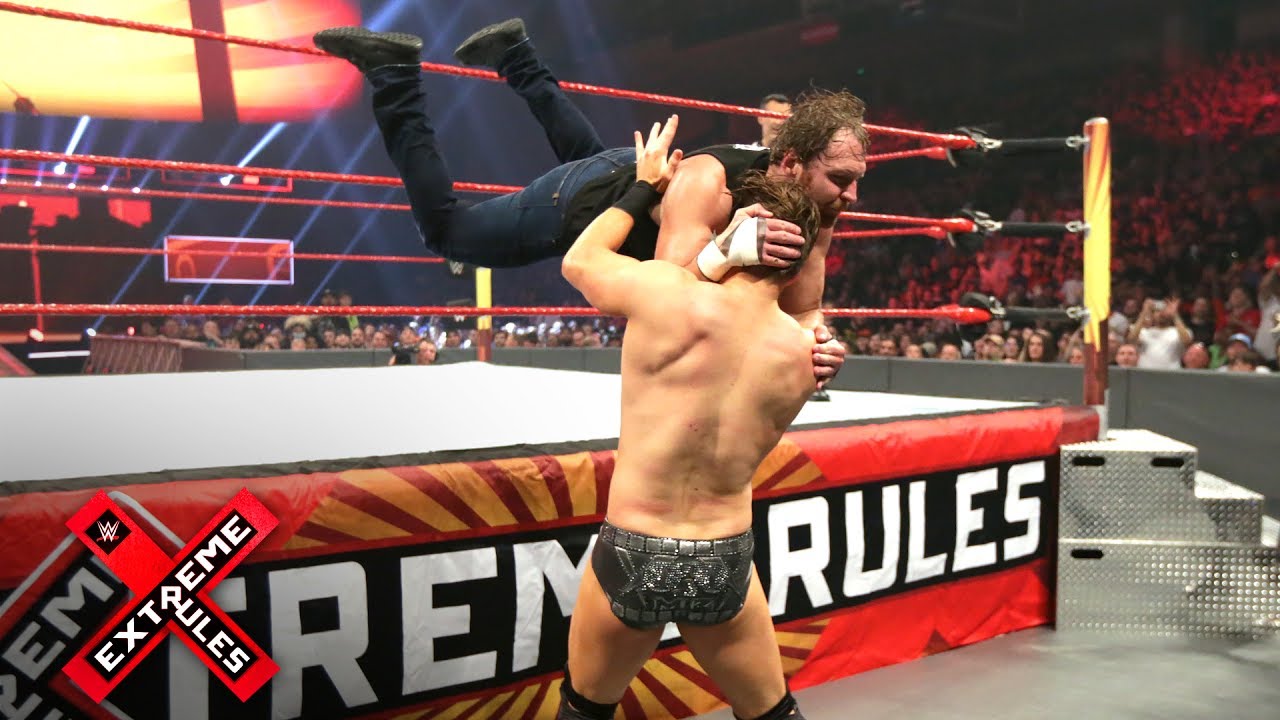 The first match on the Extreme Rules card happened to be one of the best. I’ll hand it to The Miz right now, he’s becoming a big match guy. You can say what you want about him, but for my money, he’s been one of the most entertaining mid-card guys on the roster over the past year. I respect what he’s been able to do and how he’s been able to stay relevant for so long. I don’t like him and that’s exactly why he’s effective. He makes me hate him week in and week out and always comes up with new dirty tactics to gain the advantage in a match. The Miz is one of the best personalities in WWE right now.

This entire match centered around the fact that Dean Ambrose would lose his title if he got disqualified for any reason. This involved multiple different situations where he had to decide against using a chair, not ram Miz into an exposed turnbuckle, and even convince the referee that he wasn’t working with her after she slapped The Miz. Maryse would end up being thrown out.  She would come back to distract the referee long enough for Miz to push Ambrose into the referee. Just as it looked like the referee would DQ Ambrose, Miz hit the Skull Crushing Finale for the 3-count.

This is the 7th IC title reign for The Miz, the only person with more reigns in Chris Jericho at 8. I think that solidifies The Miz as one of the better stars of this generation. My whole problem is that they haven’t given him another true shot at a top title. I think he has another gear he can get to that we’ve yet to see. I can’t discount Dean Ambrose here as well. He’s been an ironman for WWE over the past couple years and he consistently has great matches. His mannerisms made this match with all the times he had to convince the referee not to disqualify him or stop himself. These guys did a great job and set the pace for the rest of the show. 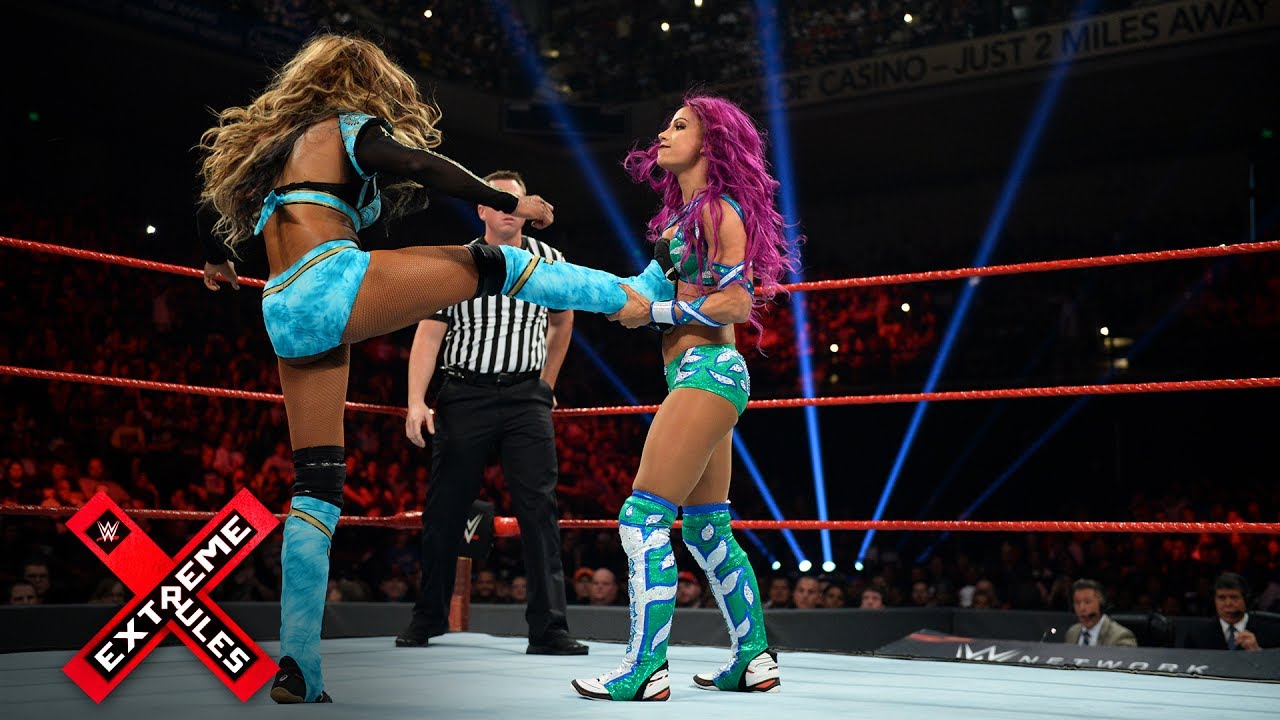 I don’t have much to say about this match. It was very much filler as I expected it to be. My theory is that they had so much time to fill on Extreme Rules that they just made up a quick feud between these 4 to throw on here. Swann and Banks won when Swann hit a Phoenix Splash for the pin. I did like how Alicia and Noam would dive over to their corner in fear to get away from the other team and they really did well to play that up. I don’t see anything else happening between these 4 and I don’t think anything needs to. It was a decent quick feud and that’s all it was expected to be. 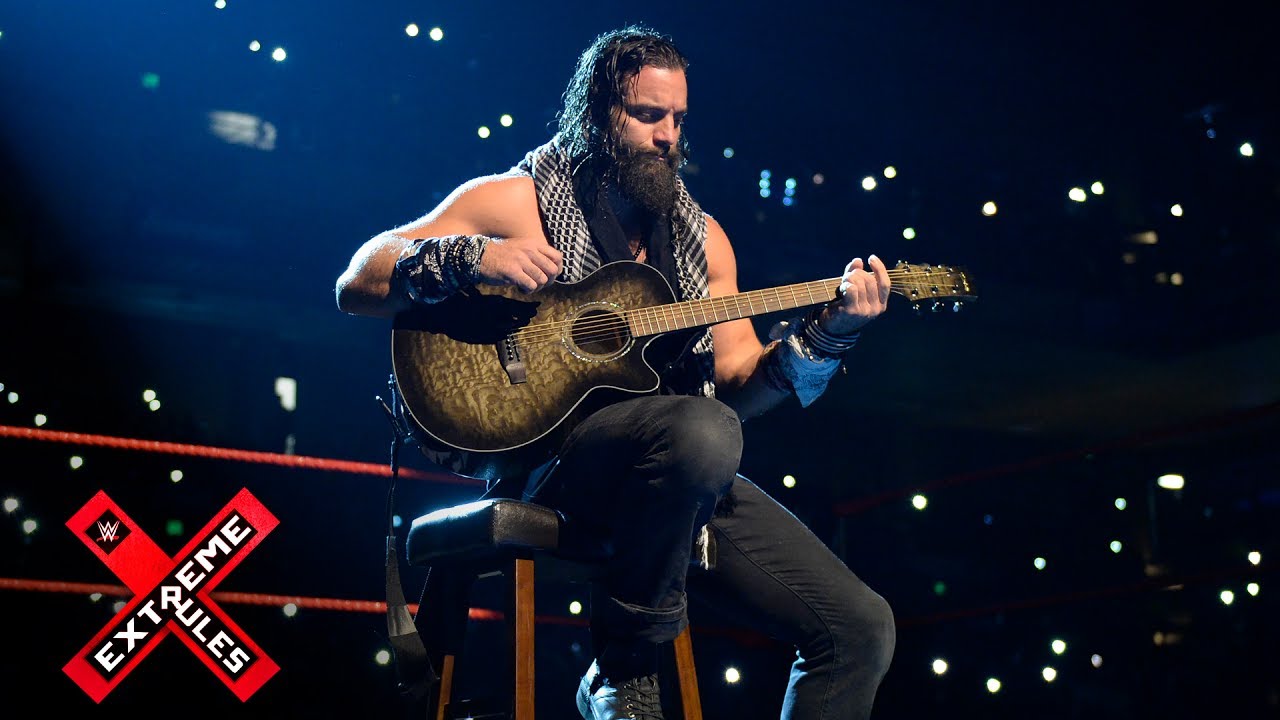 Elias Samson decided to pass some time at Extreme Rules by running down the Baltimore crowd with a song. It served no purpose other than to fill some time, but it was pretty funny nonetheless. Samson is really coming into his own on the Raw brand.

Kendo Stick on a Pole Match for the Raw Women’s Championship: Alexa Bliss (C) vs. Bayley 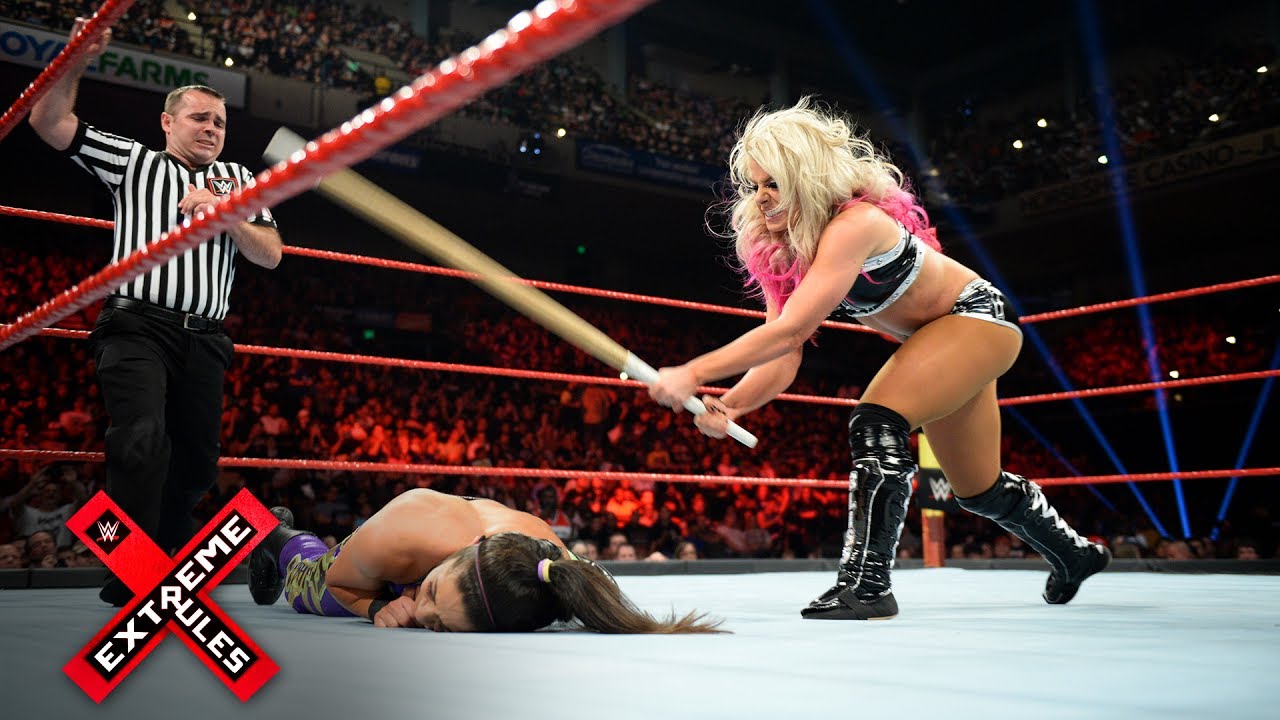 I had my reservations about what was going to happen in this match. As I’ve said before, I’ve never seen a good “on a pole” match. There’s no psychology in a match like this. All they can do is try to get the object, use the object, go to the finish. They’re almost always the same and this one was no different. That’s not a knock on Bayley or Alexa, it’s more that they just didn’t have much to work with. I think had this match gone on a bit longer it might have been better.

Alexa did get the win after dominating most of the back half of the match. She ended up hitting Bayley with the Kendo Stick, sending her into the Kendo Stick in the corner, and hitting her DDT for the 3-count to retain her title.

I think it’s time for Bayley to be out of the title picture for 6 months or so. She hasn’t been portrayed in the best light in her recent feuds and has been made to look weaker than she should. I think the best case scenario would be to build up to another title match down the line somewhere. As for Alexa, I would love to see Alexa vs. Nia. I really would like to see what Alexa tries to keep the championship against such a powerful opponent. 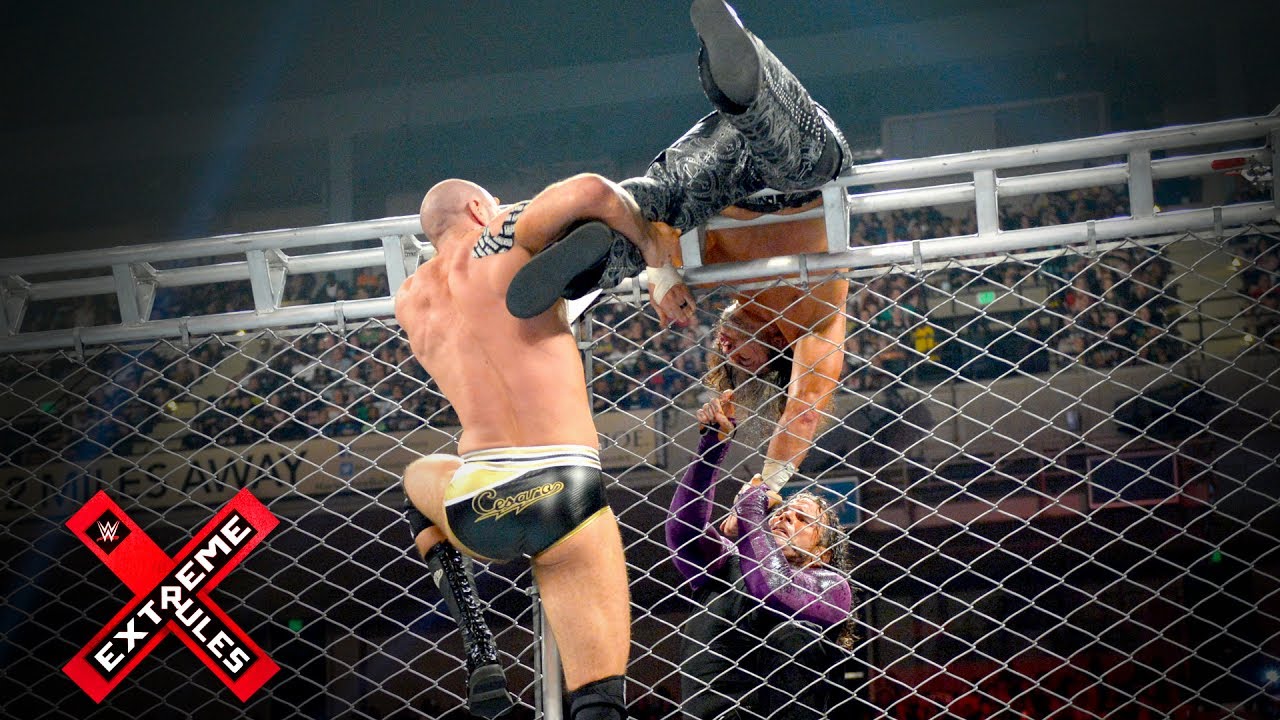 These two teams delivered a really interesting cage match. There weren’t too many high spots and it focused more on the psychology than big moments. With that being said, I enjoyed it. These two teams beat the crap out of each other yet again with some hard shots and everyone bouncing off the cage at one moment or another. I like the chemistry between these teams and I have no doubt that The Hardys have made Cesaro and Sheamus that much better than they already were.

The intertesting part of this match was the fact that Jeff actually managed to get out of the cage leaving Matt in there with Cesaro and Sheamus. The whole rest of the match was spent with Jeff trying to get Matt out while staying outside of the ring. Eventually, he realized he couldn’t a hit Whisper in the Wind from the top of the cage on both opponents. It wouldn’t be enough as Cesaro and Sheamus would touch the floor before Matt and Jeff could get out the door of the cage. Matt had to physically drag Jeff and couldn’t get him out in time.

I think this will be the catalyst to breaking up The Hardy Boyz as a tag team. It was a cool way to reintroduce them to the audience, but the smart money is on singles runs for both guys. I believe they’ll get a rematch, lose, and likely go their separate ways after that, perhaps even splitting off onto different brands later this Summer. It’s just a thought, but I think it would be best for both guys. 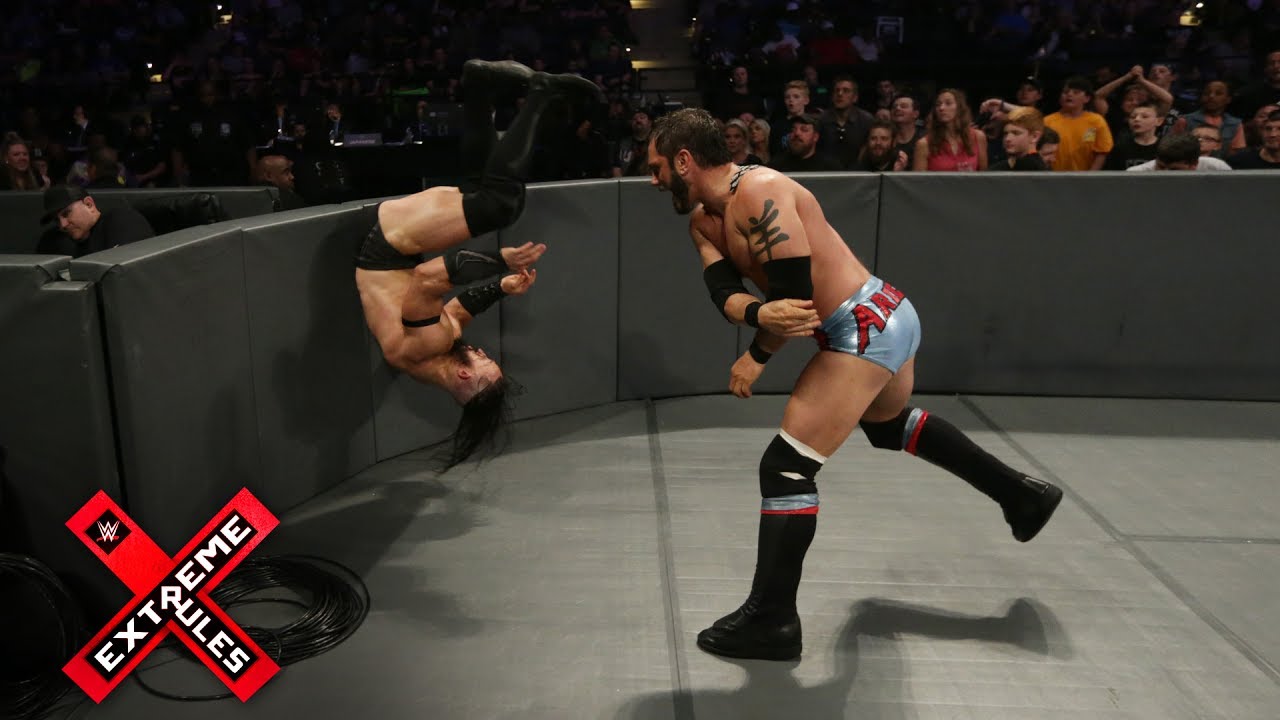 As many bad things as you can say about the Cruiserweight Division and how it has been utilized, Neville and Austin Aries have been the two bright spots. These two guys have had some incredible matches together than barely anyone has cared about. Aries took a nasty dive to the outside through the ropes in which I really thought he was injured. He ended up being fine and they used it throughout the rest of the match to cast some doubt on whether Aries could take the pain.

Aries actually had this match won a few times, but it just wasn’t his night. He got Neville to tap out to Last Chancery, the problem was that it was on the outside of the ring so it didn’t count. Neville would win the match after a Red Arrow into the Rings of Saturn. It was an incredible finish and one that I’ve never seen before. It was different.

I’d be surprised to see Aries get another title shot at this point. He’s lost about 3-4 title shots in a row. At some point, someone else needs to come in and chase the title. I’m kind of surprised that we didn’t see Aries win and I’m not really sure why at this point. This match was the surprise of the night for me.

Fatal 5-Way Match to Become the #1 Contdender to the WWE Universal Championship: Samoa Joe vs. Finn Balor vs. Seth Rollins vs. Bray Wyatt vs. Roman Reigns 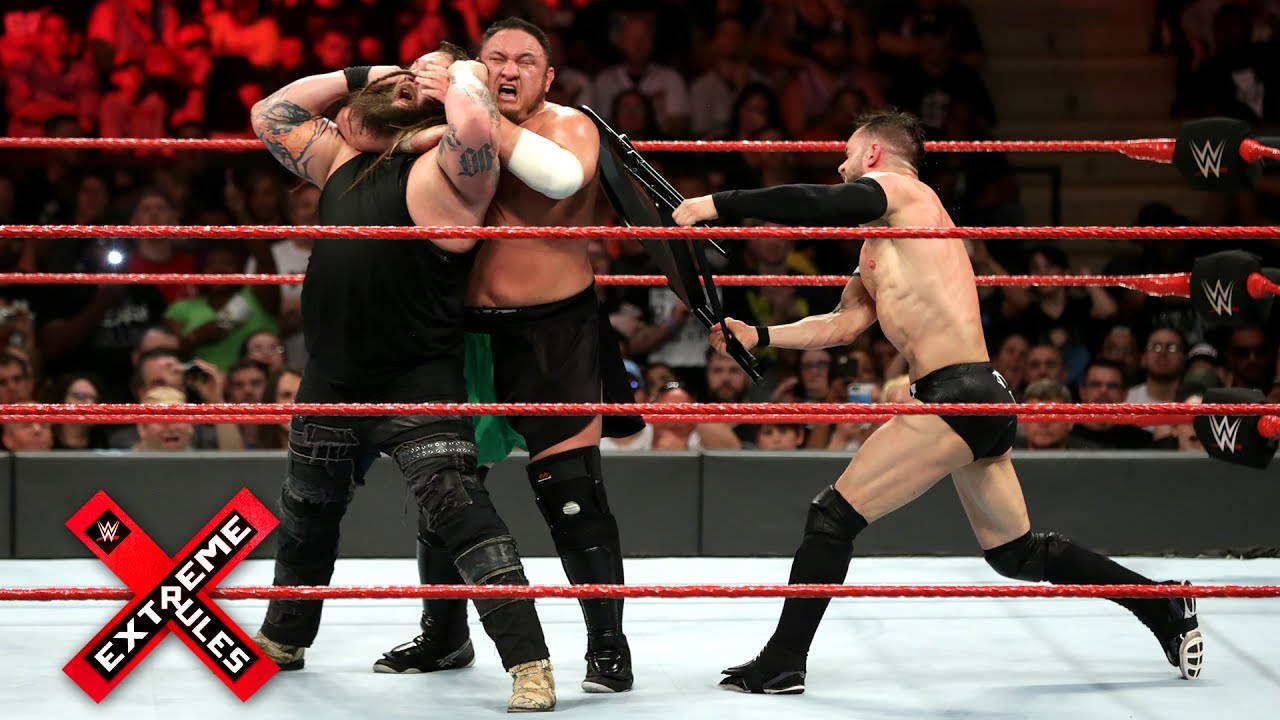 This match was like a car crash. It had big spots, crazy moments, and things that just made you wince. It was 5 of the best WWE Superstars today going at it for the chance to win the biggest prize on Raw. There is something cool about that, it makes the title feel that much more prestigious. I also liked the fact that it felt like anyone could win this match. It wasn’t as predictable as matches in recent memory and I really enjoyed that.

Samoa Joe stole a victory after Finn Balor took out Roman Reigns and Joe locked Balor in the Coquina Clutch. Balor ended up passing out leading to the referee calling for the bell. Out of everyone in the match, Joe was the last person I expected to win which made this even better. The thought of a guy like Joe going against Lesnar is an amazing idea. There’s perhaps no one that can match Lesnar’s intensity like Joe.

Extreme Rules ended up being a stop-gap show. There was some great wrestling, but I wasn’t invested in many of the feuds being portrayed, so it was pretty lost on me. I think the real excitement will start on Raw tonight as things start to heat up towards Great Balls of Fire and SummerSlam.