FYIG WWE Weekly #3 features our thoughts on new champions at Battleground, the return of a giant, and the new Kurt Angle storyline! 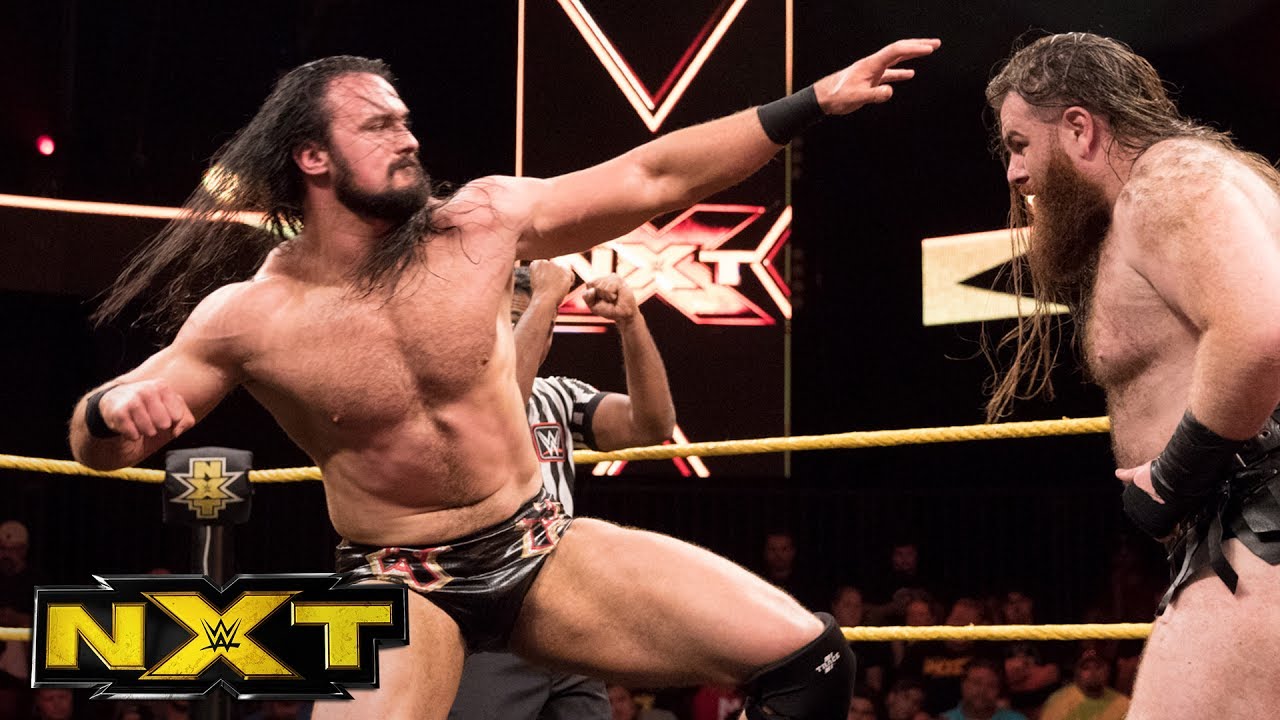 Killian Dain battled Drew McIntyre to become #1 Contender to the NXT Championship on this week’s episode of NXT. It took 2 Claymores, but he finally took down the big man. Part of me is slightly surprised because very few people have taken down Killian Dain, if any. I very much expect for Dain and Sanity to do something about this in the next few weeks leading into Takeover. I could still see this match somehow becoming a Triple Threat.

If the match does remain McIntyre vs. Roode for the title, I think we’ve got a show-stealer on our hands. I’ve been waiting for Drew to rise up since he debuted in NXT a short time ago. Roode has been a good champion, but I really think it’s his time to move on after this program with McIntyre. Drew can carry the brand just as well as Bobby has and with Bobby getting older, it’s time to get him on the main roster. I think his Glorious gimmick is going to be bigger than anything else in WWE on the main roster and I think we’ll see him up there before the year is over. As for Drew, I believe he’ll be winning the title at Takeover. 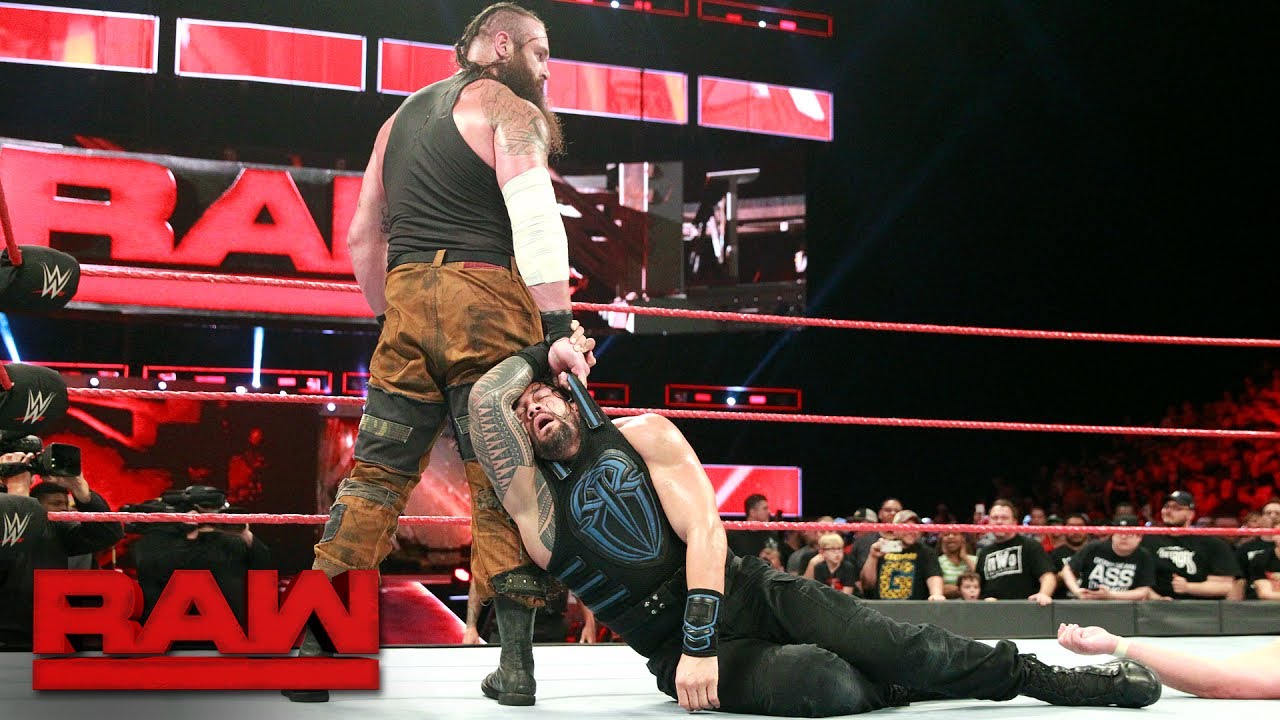 Raw has the good luxury of having 3 very capable guys vying to be the #1 Contender to the WWE Universal Championship right now. We thought we were going to get a definitive #1 Contender on Raw, but Braun Strowman messed all of that up. He interrupted the match between Samoa Joe and Roman Reigns and we weren’t given a conclusion to that match. I’m wondering if it’s going to be a Fatal 4 Way now or if they’re going to do something to have it be one on one with Brock against one of these 3 guys.

I still expect Roman to ultimately win the Universal Championship at SummerSlam. At this point, I just want it off Brock. WWE has had their top title on too many part-timers in recent years. Raw really needs that title on the show every week. It’s hard for Raw to feel like it matters as much when we’ve only seen one title defense in about 3 months (what happened to the 30-day rule?). I would really like for a swerve to be put in here and for Joe to win the title. He’s made great strides during his feud with Brock and I really think he would be a great champion. 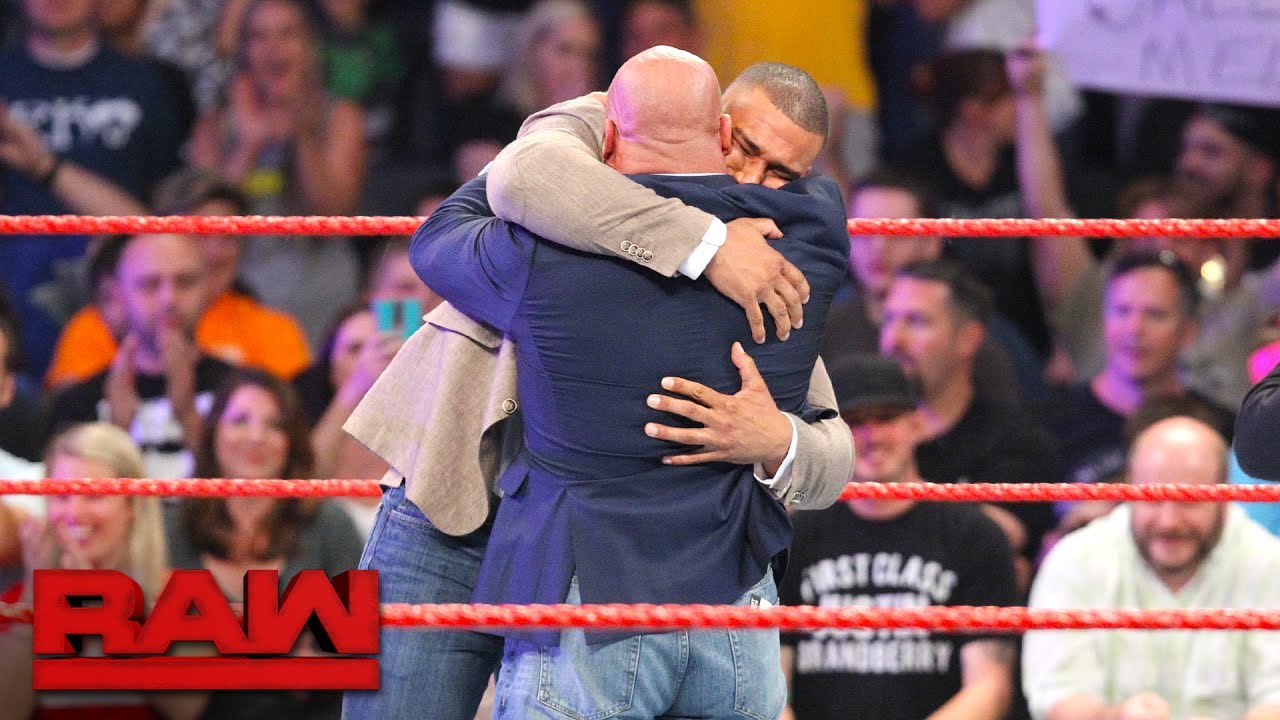 Well, the whole Kurt Angle storyline took a strange twist with Jason Jordan being announced as his long lost son. I don’t know how I feel about this just yet. I’m really happy for Jason because he’s worked so hard and this means that the company is legitimately behind him enough to give him an opportunity. The thing I don’t like is that he’ll forever be connected to Kurt Angle now and I feel like he could have made a name for himself on his own.

The sad part of all of this is that my favourite tag team, American Alpha is no more. Chad Gable will remain on SmackDown and Jordan will head to Raw. It’s bittersweet for me. Both of these guys deserve to have great singles careers, but I really believe they should have had a bit longer of a run as a tag team. They had a short title reign in NXT and WWE and that was it. They could have easily gone down as one of the best teams in history. Now, they’ll just be a tag team footnote. It’s sad but, hopefully, both guys find singles success.

I will say that this storyline caught me by surprise. It was so out of left field. I really did suspect that it would be something with American Alpha, but I expected it to be both of them, not just one. I’m curious to see where they go with this and what feuds will come of it. I do hope it leads to Angle wrestling again.

I’m not going to talk about this too much, but I thought it was great to see Becky beat her friend Charlotte on SmackDown. Charlotte has looked untouchable since joining the main roster. It’s nice to see Becky get a win over her to show that she’s a star too (not like we didn’t know that). The match meant very little, but I enjoy seeing friends go at it in the ring. They had a good match which would have been even better if it went longer. Maybe this is a sign of feuds to come? 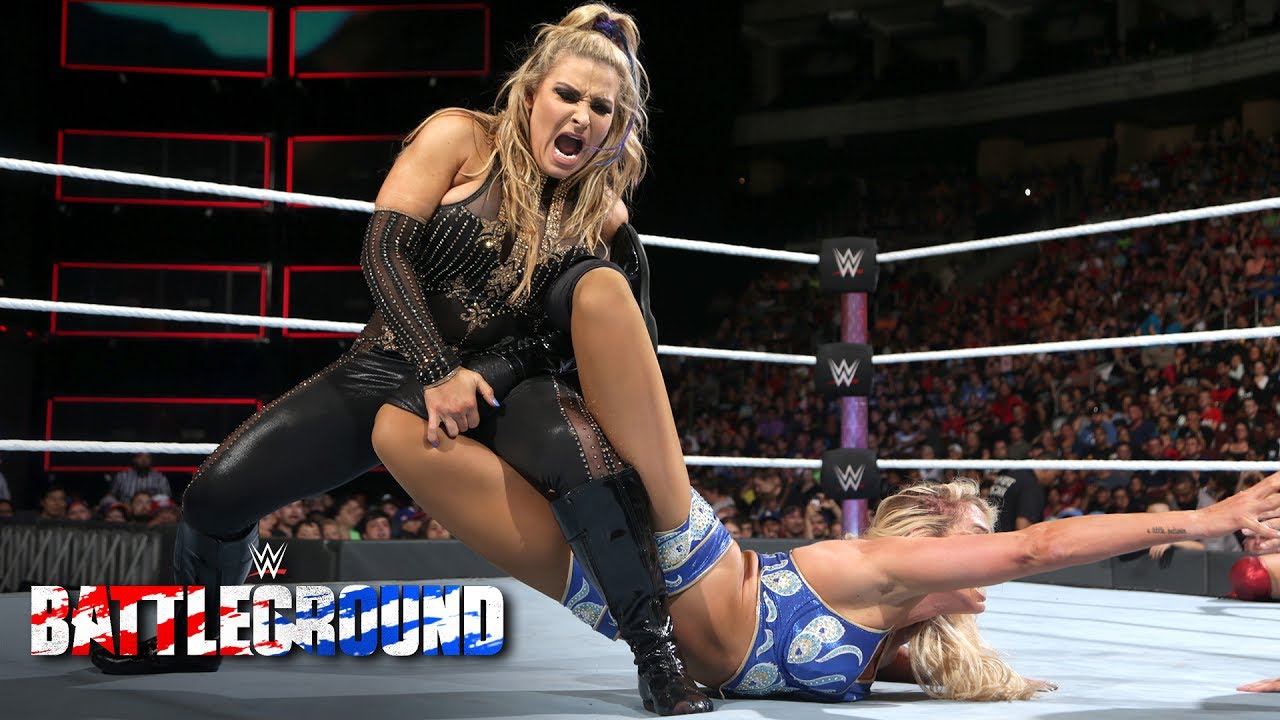 WWE went with the dark horse in the 5-Way Elimination Match at Battleground. It was great to see Natalya finally get an opportunity at the title after waiting so long. It’s been many years since she’s been a champion so giving her the opportunity was nice to see. It’ll be a good change if she actually does win the SmackDown Women’s Championship. It seems like WWE goes with new girls as champion constantly and it would be nice to see a better mix of who gets those opportunities and who doesn’t.

I was pretty pleased that Lana didn’t somehow win another opportunity. I don’t know what WWE is trying to do there, but it really seems as though they have plans there. It’s cool to see Tamina helping her out, but we’ve been there before with AJ. There’s no reason to rehash that so soon. It also seems weird that Tamina seemingly doesn’t want the title for herself. That’s a plot hole to me that can’t be easily explained. 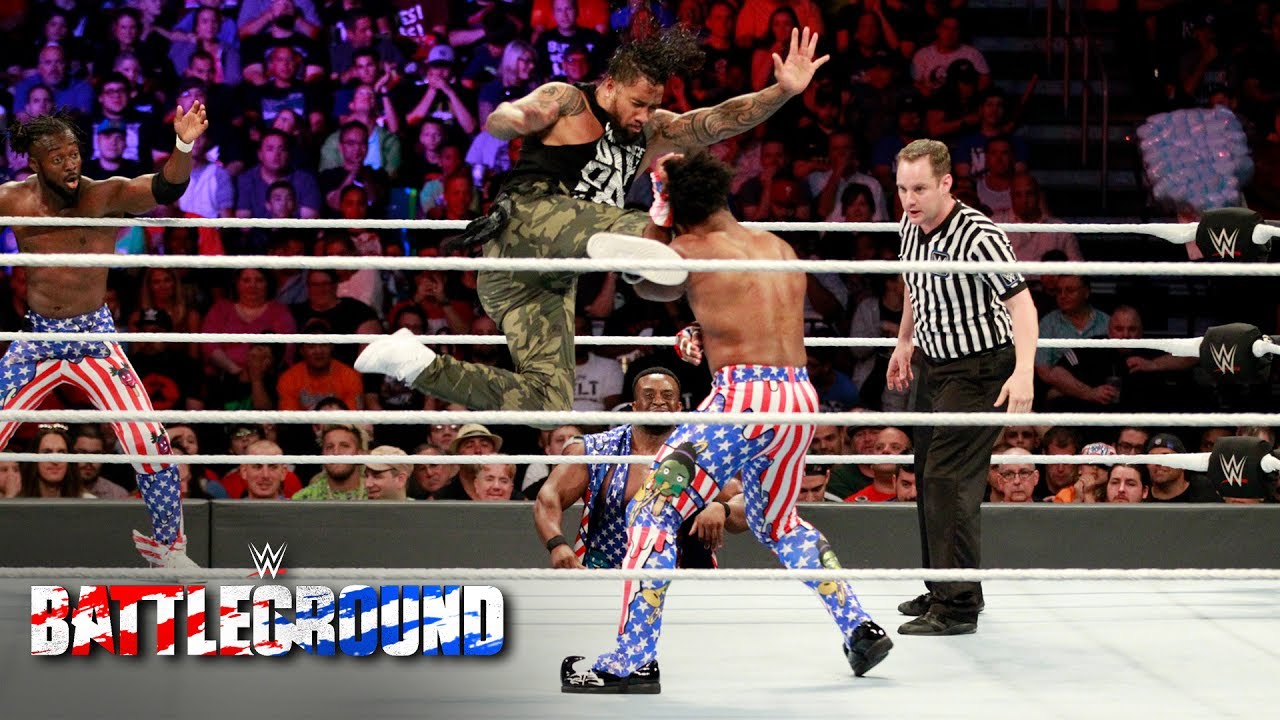 Can we even call it tag team gold anymore? It’s technically silver now. Anyways, how good have these two teams been together? The answer: very good. These two teams are showing some of the newer ones coming up that they’re not going to just fade away into oblivion. Honestly, I thought this match was one of the best tag matches of 2017 which is high praise considering it’s July. These two teams just have such a fantastic chemistry and they’re always so fun to watch.

I was the first one to say I was annoyed with The New Day’s last tag title reign. It dragged on. They were just beating teams to beat teams with no real rhyme or reason to it. There were even some teams, like Gallows and Anderson, who should have defeated them but didn’t just to lengthen the reign to beat the record. I don’t feel that way now. The New Day is better than ever right now. They’ve been having some really good matches on SmackDown and I think they can do some great things with the rest of the tag division.

Kevin Owens Takes Back the Title 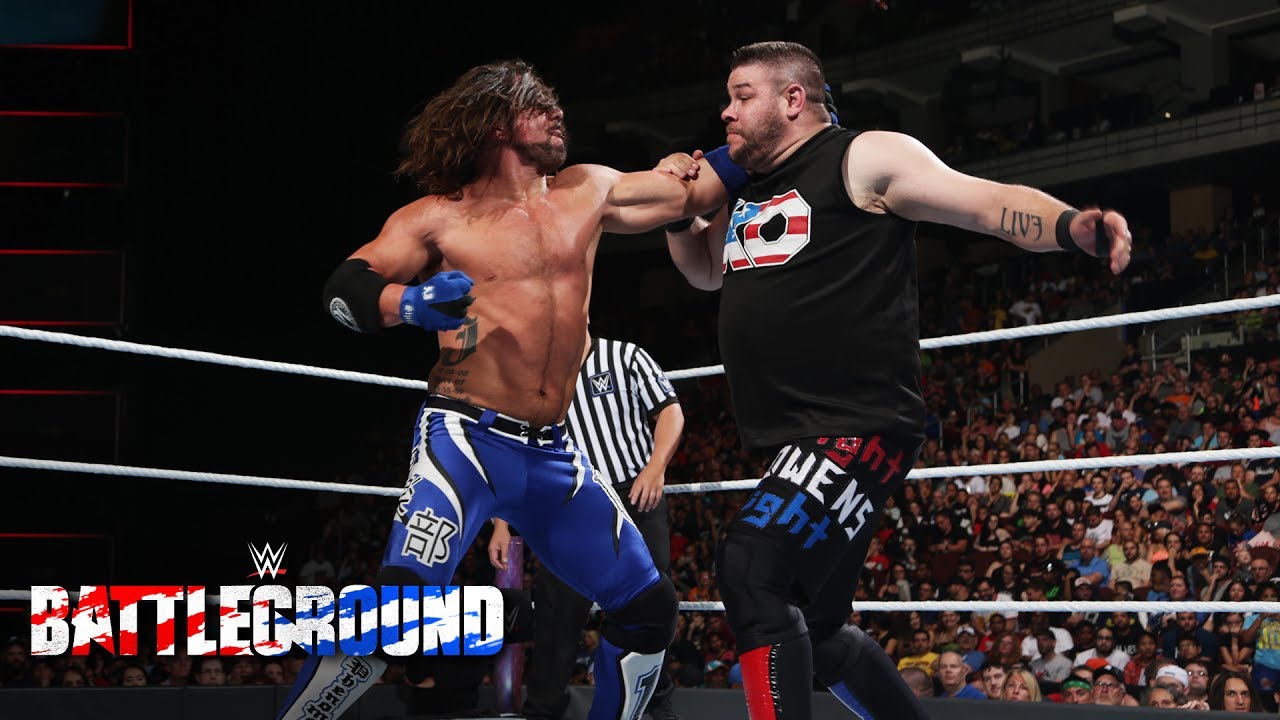 AJ Styles won the US title inside Madison Square Garden last week. Kevin Owens won it back last night. While I understand that it got them a lot of buzz for AJ to win it like that, it just felt kind of pointless. These two had yet another good match, but I’m just not really into this feud so much. It’s a good feud, it’s just one of those ones that I don’t really care about.

I will say that Kevin Owens was hilarious on Talking Smack and you really need to watch his segment if you haven’t No one antagonizes better. 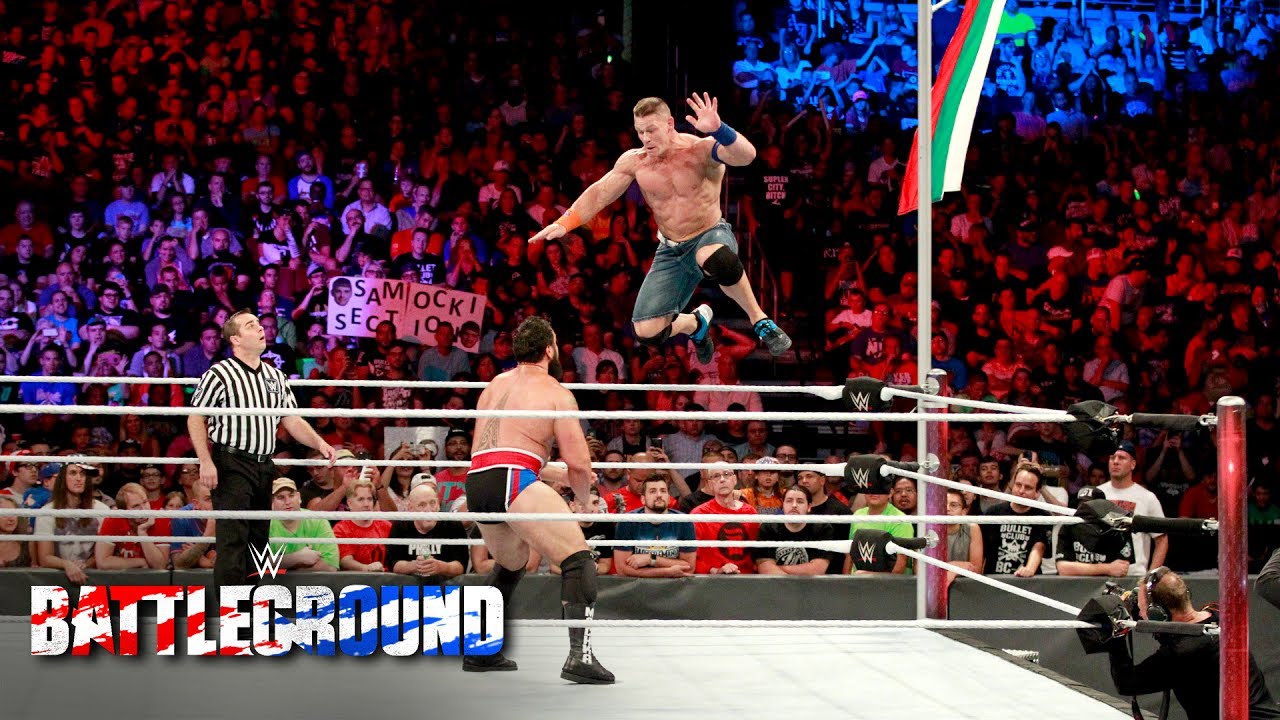 Ohhhh that Flag Match. Is there a point to these? No. Are they entertaining? Not really. Yet we still keep booking them. These matches are so anti-climactic. Of course, the American is going to win, it’s an American company. There have been few times if any, that the other country’s Superstar wins. I’m fine with the patriotism, that’s cool, it’s just boring from a fan’s perspective. I like Cena and Rusev and I still didn’t want to see this match. I hope both of them do something more traditional the next time around and that we bury this Flag Match concept once and for all. Anything on a pole matches are bad. We all know this.

Why is it that it’s always Cena too? I know he’s a patriotic guy, but i think it’s polarizing to have him be the face of America every time. Wouldn’t Kevin Owens have a problem with that? It just seems like we have Hulk Hogan Jr. going on here. 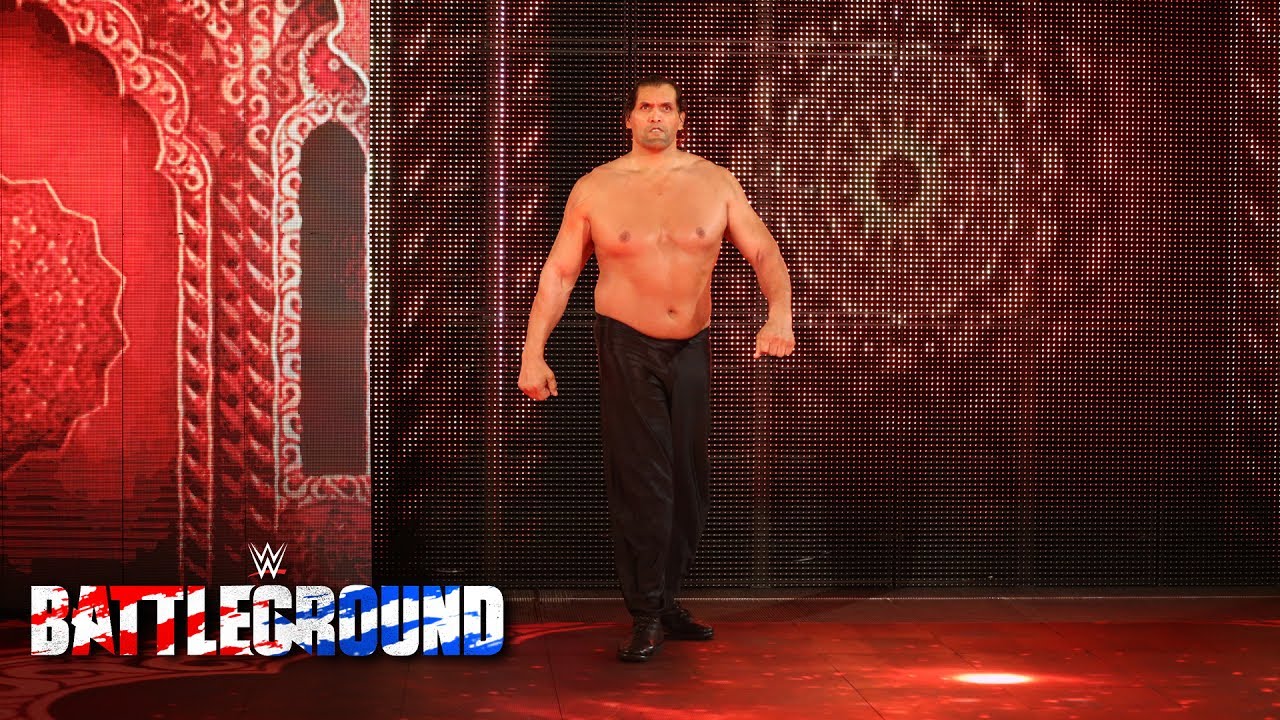 Well, that was unexpected. The Great Khali made his return to WWE by helping Jinder Mahal retain the WWE Championship. Jinder’s stable just got a lot bigger and a lot more dangerous. Now it just needs a name. I would love to see this stable feud with another stable, but there aren’t any real options that make any sense right now unless you go with an Orton/Cena super group. I don’t know who you could pair with them beyond that. I don’t see much value in Khali wrestling and I hope that he doesn’t have many singles matches. He wasn’t good in 2007, he’ll be that much worse now. It’s not about him being a great wrestler, though, it’s the imposing nature of the big man that makes him valuable

That’s it for this week! There was a ton to talk about, but I narrowed it down. Come back next week for my thoughts on Bayley vs. Sasha and more!