*A copy of Space Junkies was provided by Ubisoft to FYIG for review purposes.*

Space battles are cool. Space itself is cool. Flying around through space in a space battle going pew pew, what could be better? Space Junkies provides just that – a way to put on a spacesuit and fly through space while experimenting with different weapons and ways to move through the varied and interesting maps. 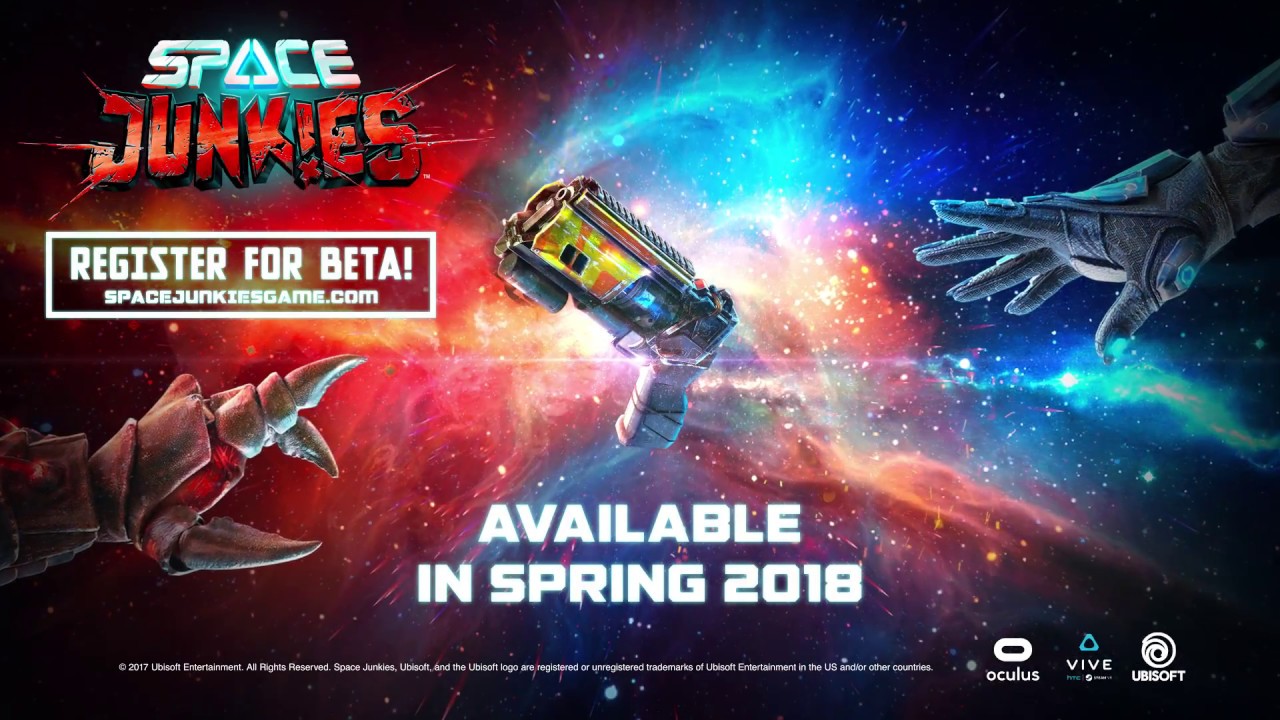 Virtual Reality, the newest untapped technical and gaming landscape, leaves an open road for development. Shooters are common, with many AAA games having VR modes or experiences like Resident Evil 7: Biohazard and Until Dawn Rush of Blood. Other, simpler VR exclusives like Superhot and Farpoint, or even surprising new experiences into the genre make VR new and exciting all over again. Space Junkies is one of those experiences that push the limit of VR and makes it engaging and fun. The entire idea of space fighting with varied weapons is enticing on its own, and this game can definitely be one of those experiences that can define the future of VR.

There’s a short tutorial that teaches players how to move, strafe, handle weapons, and move through space. As someone who hasn’t really dealt with too many movement-heavy VR games, aside from Beat Saber, this was new to me. Have you ever seen those viral videos of people slamming into walls, desks, and just falling over while using a VR headset? I’m not even ashamed to say that I was exactly that person while learning how to navigate Space Junkies. It was a definite learning curve, but if you don’t quite have VR legs, maybe play this one sitting down. Turning your head to see around you and spinning in circles to make sure you have eyes on the targets (and enemies, once you’re set free into the multiplayer setting) can be disorienting until you really get a feel for the intuitive movement using the controllers.

On the Vive, this was a little difficult to master as the touch pads can be pretty sensitive, and I’d often find myself shooting in a direction because I’d pressed just a little too hard. The Oculus controllers may be more intuitive for this, but after some time I’d gotten used to it. PlayStation players may be disappointed to find that there’s no Move controller support, meaning they have to use a controller for Space Junkies. This is disappointing, as some of the charm comes from really getting into the movement. Using a controller to shoot and move just removes some of the fun of the game. There’s no word whether the PSVR version will get Move support just yet.

The weapons and gadgets in Space Junkies almost remind me of Borderlands mixed with Halo and their varying fun factors. There are simple handguns, machine guns and shields, reminiscent of your traditional shooter, but other weapons are just plain fun to use. The slingshot, complete with explosive grenades, requires players use both hands to both hold and pull back the sling to fire at enemies. Other gadget weapons like plasma swords give more limber players a chance to get up close and personal while enemies may be fumbling with their own weapons, like me, who barely started managing two-handed weapons efficiently after some practice. Weapons can be found mid-match, giving players an opportunity to switch up tactics on the fly. Most often, though, during a match, you’re more likely to find health, armor, or gadgets to up your lethality.

In VR, a sort of extension of real life, movement and expression are important. You are literally in the game! One thing that really pleased me with Space Junkies was the ability to really be expressive in the game. Players can use emotes in game, reviving the classic feeling of (nicely) making fun of your enemies, almost reminiscent of earlier Halo days where using small gestures made a big difference. There’s a lot of character in the game itself, made more obvious by the tutorial. The game knows it’s light-hearted, all-around fun.

In general, combat in Space Junkies is wild and free, a literal open playground to annihilate your enemies. While there can be some tactics involved, like learning the map, the whole point is a run (float?) and gun. Respawn time is very quick, throwing you back into the action for seamless gameplay. Each new respawn brings with it a new weapon and a new way to play. While this can feel too quick for some, Space Junkies does a very good job at making sure there’s never a dull moment. Having a headset on means you’re always in the game, so why should the game stop when you’re taken out?

Once you get a handle on the game, you can even change your class to a more brutal Junker or one that’s quicker than the others, allowing the weapons and gadgets to feel more meaningful. For the varying game modes, changing up tactics can be helpful. For the King [of the Hill] Mode, being quicker than others can be a great advantage. In the classic deathmatches, a damage-focused class will help take down enemies faster and keep you alive longer. Loot Boxes, based on experience earned, also gives players the ability to add a personal touch to their Junkers.

Space Junkies is just a plain fun game, but the future of it is uncertain. There were several times where I felt I had to wait to play a match for a few minutes, meaning that the player base isn’t quite as strong as we’d hope. Knowing that, having a simple single-player playground of simple targets may help distract players from waiting for matches. While the devs have promised more updates, including weapons, some more multiplayer modes will also be a welcome addition. There’s nothing more wild and free than a 5v5 or 10-player free for all where there are no rules. Building on this game may take some work, but it’s a very solid foundation for many future VR games to learn from.

The Last of Us Review