Born and raised in Windsor, ON. I grew up playing sports and dancing on the Highland dance circuit. I started singing in city contests when I was 15 years old. I went to the University of Windsor for Nursing and also ran varsity track & field for the Lancers where I was a 5x Academic All-Canadian and won a national bronze medal. During my time there, I also held a part-time job at the Bull & Barrel as a server and became their house-singer over the next three years. When I was graduating I was encouraged by patrons to pursue music and I haven’t looked back since. I took up the guitar when I was 21 years old, moved to Toronto and started making my own music. Since then I’ve written with #1 hit songwriters in Nashville for Luke Combs, Jon Pardi, Reba, Tim McGraw, etc. played Canada’s largest stages at venues like Boots & Hearts, Big Valley Jamboree, Havelock Jamboree, and Rogers Hometown Hockey Tour. Last year I was a top-three finalist in SiriusXM’s “Top of the Country” contest in all of Canada. This year I am releasing my debut album “As I Go” with the help of FACTOR Canada (which I later learned is only given to about 3% of the thousands of applications they receive). I consider myself pretty lucky, to say the least, and attribute all of my success to the core values I learned growing up in Windsor and I’m extremely grateful for every step of this journey.

You were once ranked third in Canada in Women’s 60m hurdles. What went into your decision to pursue a music career over athletics?

Well, I knew my last year at University was the best way to retire my athletic career. Women’s sprint hurdles is one of the top track events, having the most depth of talent in Canada alone. So once I had achieved a podium spot, and when my co-captain/best friend Nicole Sassine and I clenched the 4th national team title in a row with our teammates, I felt going out on top was a great way to end my athletic career. The real dilemma was when I graduated from nursing a month later and then deciding if I should pursue music or nursing. I decided I didn’t want to live with any regrets or “what ifs” so I chose music— it was my first and strongest passion, and it was more of a “now or never” type of career. Still no regrets, and I will also be using my nursing degree to help on the front-line in the next coming months.

It’s not often that I get to interview a fellow Windsorite. How did growing up in a city like Windsor with such close proximity to Detroit and Toronto influence you in your music career?

Detroit had a huge influence on my music. We never had cable, so we relied on the strongest signals for TV and radio through the ol’ “bunny ears.” So at the time, this was usually from Detroit. I learned more about Canadian legends like the Tragically Hip and Rush, when I moved to Toronto. My parents also played a lot of their music which I had adopted as my own like the Beatles, CCR, Doobie Brothers, Aretha Franklin, Stevie Wonder, Garth Brooks, Randy Travis, and Wynona Judd. But most of all, growing up in Windsor has instilled essential core values like gratitude, altruism, generosity, and always having a strong work ethic….. I also might just be too stubborn to quit (which could equally be accredited to my Italian half). These qualities, I believe, have helped me stand out and get to where I am in my music career.

Country with (quite frankly) undertones of whatever mood I’m in that day. Someone said I was Shania Twain meets Bonnie Raitt (which blows my mind, but I’ll take it!). For the sake of being from Windsor, let’s call it “border-line” country ;).

What can you tell us about your latest single, “As I Go”?

This song has a bit of a rock-edge which is very different than my previous singles as the vibe initially was inspired by Eric Church. We didn’t have a concept going into this write, so like the line says “I’m gonna make it up, as I go”, that’s precisely what we did. As it later took the form of a “revenge, cheating-song,” we felt obliged to pay homage to arguably the biggest revenge song of all time, saying, “maybe I’ll wake up the neighbourhood, pull a Carrie Underwood on his Ford.” What’s different about this song from other songs of similar subject-matter is she admittedly can’t make up her mind about what to do (which is something I can relate to…. you should see me try to order at a restaurant), which adds some humour to the situation.

The video for, “As I Go” has a bit of a Mad Max feel. How fun was it to go out there and have this group of people with all these vehicles mudding around? 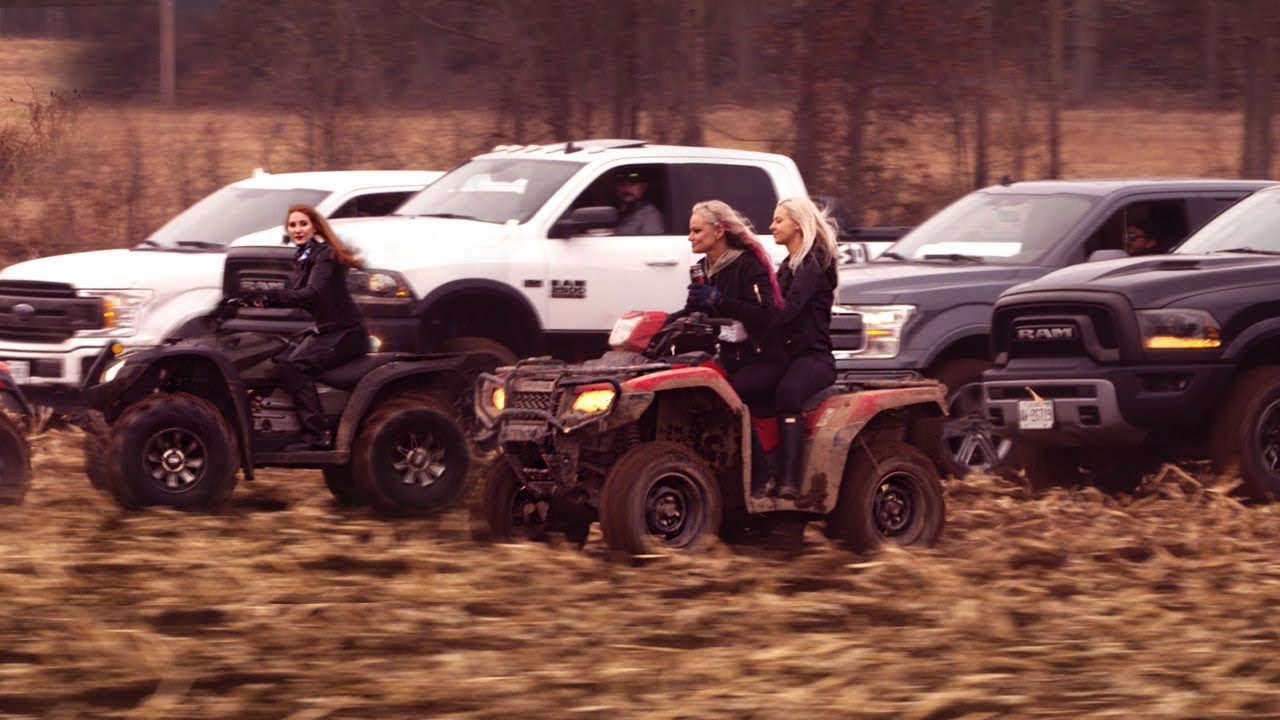 This was definitely the most fun I’ve ever had on set. The making of this video felt a bit like a “ropes course.” I only knew my crew coming to the shoot and my friend who owns the big monster truck. The other people were all his buddies, so to have everyone work together for the first time, doing all of these crazy stunts, while in the freezing cold (December 28), really felt like a huge accomplishment and was an experience we all bonded over. I wanted to make sure I did all of my own stunts too. That was my first time riding an ATV and shooting a rifle and I was the first girl to ever drive my buddy’s monster truck because I know how to drive stick-shift, so I felt like a total badass lol.

A preview for the video went viral on TikTok with 1.5 million views in 24 hours. How did it feel to have such a massive success with a simple preview?

It felt really cool. I’ve never had an immediate response that huge before. And the fact that 99% of the comments were positive (which is unheard of with that many views) was just that extra verification that we really had something special and made me that much more excited to release the full music video.

How has TikTok helped you build your brand as a budding singer/songwriter?

It has acted as another way people that wouldn’t normally hear my music, can discover it. I’ve received quite a few comments on my socials that say “I came here straight from TikTok, and I’m glad I did,” which makes me really happy and appreciative that they took the time to check out my music.

Your debut album is out now. What can audiences expect from this set of songs?

Whether it be happiness, sadness, romance, triumph, frustration, anger, sexy, funny, etc. each song serves a different purpose on the album. My hope, especially during these challenging times, is that it brings some comfort and people can relate to it as they too are experiencing all of these mixed emotions.

You have to write hundreds of songs to have a handful of “decent” ones so don’t be discouraged. It takes lots of practice and each “bad” song is a stepping stone to something better. Even Ed Sheeran has admitted to writing hundreds of “terrible” songs. What you see is only the batch that rose to the top. So keep at it, write with others because two brains are better than one and you learn new tricks for tool belt, and always try to top the last one!

Do you have any embarrassing stage/tour stories?

Lots! One was on the main stage at Boots and Hearts. I was wearing this lace shawl over my outfit and it caught onto my keys player’s wire on her bodypack when I went over to her during our set. Since I couldn’t get it off, I just took the whole thing off and left it with her since she was stationary anyways. She later took it off and came up to me to give it back and we had a James Brown moment haha.

Music as a completely independent artist is a 24/7 job so I, unfortunately, don’t have much time for much else. But the time that I do have to myself, I try to spend with my friends and family, go to the gym, enjoy a nice cold one or a glass of wine, watch some Netflix. Pretty simple.

However, things are a bit different now, so I’ll be putting my nursing degree to good use in these next few months to help with the COVID-19 fight.

FYIG Chats With Jordan White of Jane N’ The Jungle