Menu
Wednesday, May 25, 2022
Sign in
Welcome! Log into your account
Forgot your password? Get help
Create an account
Privacy Policy
Create an account
Welcome! Register for an account
A password will be e-mailed to you.
Privacy Policy
Password recovery
Recover your password
A password will be e-mailed to you.
Find Your Inner Geek
Menu
Home FYIG Features FYIG Chats With... FYIG Chats With Actress Cassandra Due
Facebook
Twitter
Pinterest
ReddIt
Tumblr
Mix
WhatsApp
Linkedin
Email
Print
Telegram
VK
LINE
Viber
Naver
Flip
Tell us a little bit about yourself.
I am a young international actress. I was born in Paris and then grew up in London until I was 18. I then moved to New York for college and I am now in Los Angeles where I have been working on some really exciting upcoming projects!
How did you first become interested in acting?
I knew from a very young age that I wanted to be a performer. At first, it was more general but when I was about 6 years old, I realized that acting was what I really wanted to do. I then started polishing my craft through multiple workshops as well as acting schools, such as The Identity School of Acting, throughout my childhood and teenage years. I loved every second of it and I knew for a fact that there’s nothing else I’d rather do than acting.
You’re a French girl who was raised in London who is now living in LA. Take us through that journey and how you got to where you are today.
I never really associated myself with being one thing. My father is Danish and my mother is French and Spanish, which resulted in our household being very multicultural.  Moving to London when I was 7 years old only added to this diversity. All cultures I’ve grown up with have had a very strong impact on who I am today and have not only shaped myself but also my work. At 18, I moved to New York and have had the chance to also emerge myself in the American culture. When looking back at my journey, it would be impossible for me to truly only feel at “home” in one place, but being in LA right now feels right for me as a person, but also for my career. I’ve had so many opportunities thanks to being in this city. I’m very grateful.
What can you tell us about your short film A 17 Ans (At 17)?
A 17 Ans (At 17) was actually based on a poem by Arthur Rimbaud, On n’est pas sérieux quand on a 17 ans. That was actually the original title for my short but I then changed it as I thought it might be a little too long. In his poem, Rimbaud paints the picture of being young with no worries during a summer of love and no consequences. I used this poem as the backstory of Emma, who had her summer love with no worries, but who then became pregnant, realizing that there are consequences when not being careful which she now must face. The illusion of being young and free is suddenly broken for her as she has to quickly grow up and make important decisions. She goes to her brother, Marc, played by my real-life brother, Karl Dimitri, for help who, to her surprise, is against the idea of her having an abortion. This causes a rift in their relationship as family secrets suddenly come to light. I won’t give away the rest of the story but you can watch it here: 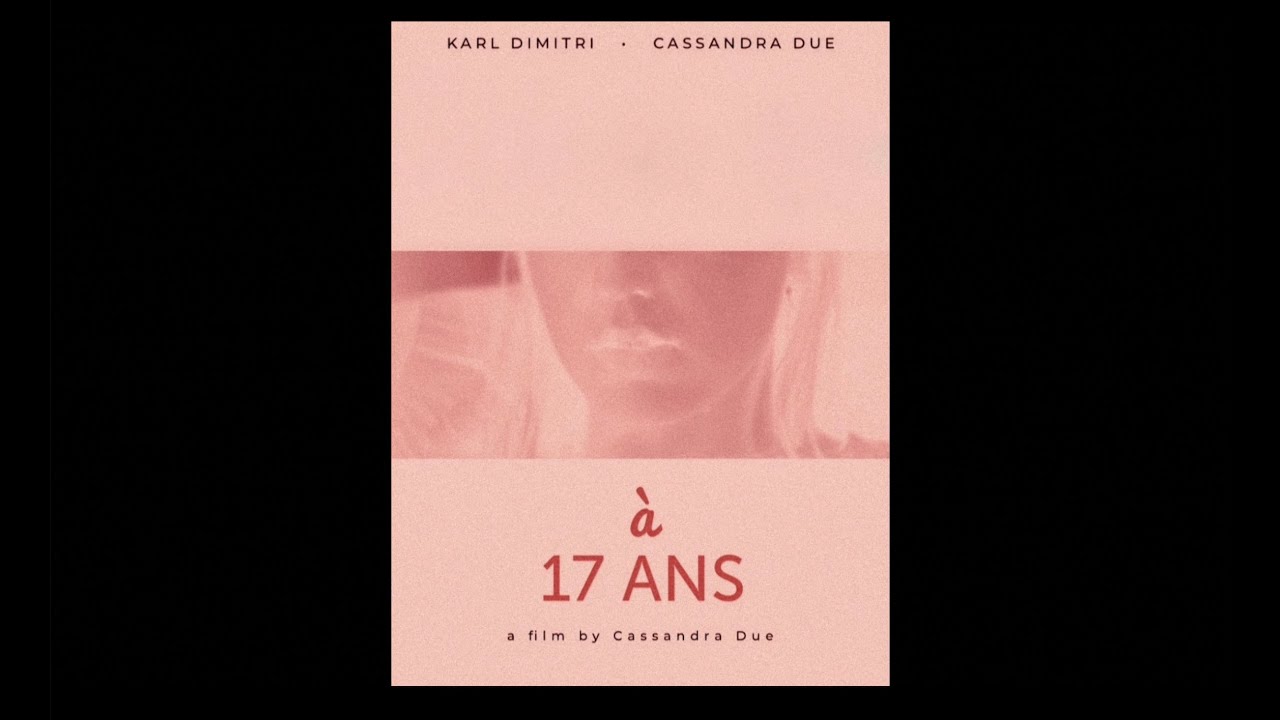 How did it feel to win the Award of Merit for Best Leading Actress from The Accolade Global Film Competition for A 17 Ans (along with a few other accolades for the film)?
It felt surreal. I mean being recognized for something you love doing can’t feel any other way. I’m just really glad and thankful that people enjoyed the film and took the time to watch it! It means a lot as an artist.
What types of things do you do to stick to your French culture in your films? Do you think it will become more difficult to stick to those roots as your career rises in America?
With A 17 ans (At 17), it was really important for me to have it been in “Frenglish.” I grew up with both French and English and never really spoke only one language. Whether it was with my friends or family, we would always speak “Frenglish.” Since I knew that I was going to be acting with Karl, it simply felt more natural, more real, to have it in both languages. Going forward, I would love to continue to bring that to projects I am in as I think that it’s also quite nice for bilingual people to have that representation in film. I think that no matter the project, there will always be a little part, detail, or anything really that my multicultural background could bring to the characters I play. It doesn’t have to be as obvious as the language, but just a little something. I’m also am very keen on supporting young international artists and so I believe that as my career rises in America, I’ll have the opportunity to do this as well.
What’s next for your career?
I have a few projects in the works right now, including a web-series in which I play the lead which will soon have its promo go live! It leans more towards the comedic side, so definitely different than some of my previous work – it’s really exciting. I am also working on an indie feature film (which is still in the pre-production stage of development) as well as some other projects that I can’t speak much about just yet! All very exciting things though!
What goals do you have as an actress for the next 5 years? 10 years?
To continue doing what I love and to be able to play characters that people can relate to. As an actress, it’s really important for me to make sure the roles I have are ones where the audience can see a part of themselves in. That’s my biggest goal I suppose, to have people really connect with the characters I play. It really is an honor.
How do you plan to empower other young women in the film industry?
I think it’s really important for everyone’s voice to be heard – including women. I believe that we all have stories worth sharing, whether they are controversial or not. I really want to be able to reinforce the idea that it is okay to talk about “taboo” subjects, sometimes even necessary. I think that it can really bring women together and create a community where it is not a problem to talk about an experience one’s been through, as it should not be, because I believe that there will be a lot of women who could benefit from feeling seen and heard – movies have that power. As a woman, there is nothing I love more than watching a show or film where I can really relate to a female protagonist. The industry is very much leaning towards this now and I think that’s truly powerful. I hope that with the stories I tell and the characters I play, I can continue to bring that movement forward as well.
What are some of your favourite films and tv shows?
That’s always the hardest question! I’d have to say The Place Beyond the Pines for its structure – I absolutely love the idea of having three acts with three different protagonists. Mommy, by Xavier Dolan, is definitely up there too. And… Jeune et Jolie (Young and Beautiful) by François Ozon. There are more but these three are the ones that first came to mind! As for tv shows, I’d have to say The Fall, Normal People, and Call My Agent. Again, there are many more…
What’s your life like outside of acting?
I mean… it’s great! Living in Los Angeles has definitely changed things for me. I love it here. The people are wonderful, the city is inspiring, and nature is everywhere! It’s been really lovely been here, in the midst of all the action!
Let the readers know where to find you online.
You can find me on instagram @cassdue !